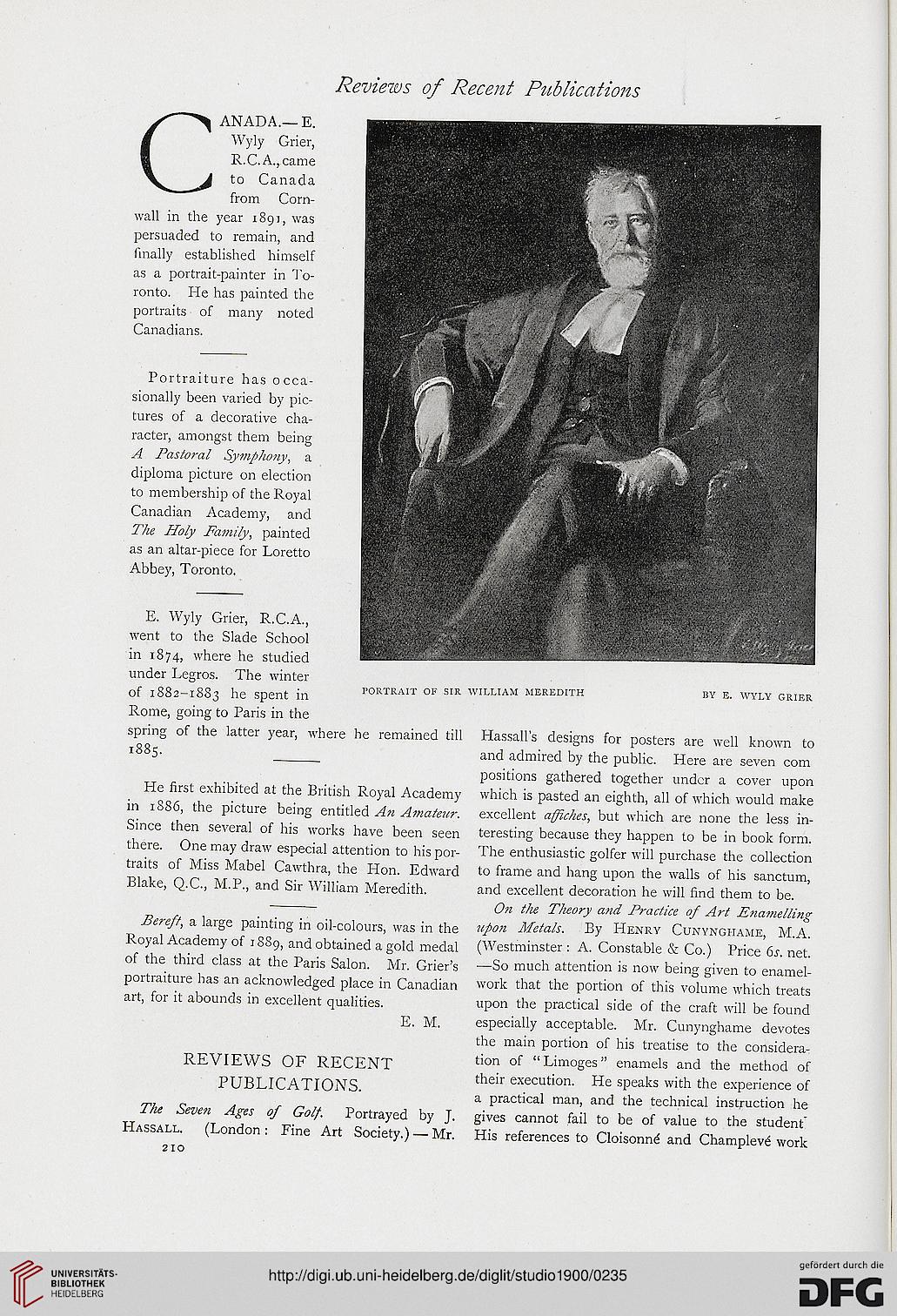 CANADA.— E.
Wyly Grier,
R.C. A., came
to Canada
from Corn-
wall in the year 1891, was
persuaded to remain, and
finally established himself
as a portrait-painter in To-
ronto. He has painted the
portraits of many noted
Canadians.

Portraiture has occa-
sionally been varied by pic-
tures of a decorative cha-
racter, amongst them being
A Pastoral Symphony, a
diploma picture on election
to membership of the Royal
Canadian Academy, and
The Holy Family, painted
as an altar-piece for Loretto
Abbey, Toronto.

spring of the latter year, where he remained till Hassall's designs for posters are well known to

positions gathered together under a cover upon

He first exhibited at the British Royal Academy which is pasted an eighth, all of which would make

in 1886, the picture being entitled An Amateur, excellent affiches, but which are none the less in-

Since then several of his works have been seen teresting because they happen to be in book form,

there. One may draw especial attention to his por- The enthusiastic golfer will purchase the collection

traits of Miss Mabel Cawthra, the Hon. Edward to frame and hang upon the walls of his sanctum,

Blake, Q.C., M.P., and Sir William Meredith. and excellent decoration he will find them to be.

- On the Theory and Practice of Art Ena?nelling

Bereft, a large painting in oil-colours, was in the upon Metals. By Henry Cunynghame, M.A.
Royal Academy of 1889, and obtained a gold medal (Westminster : A. Constable & Co.) Price 6s. net.
of the third class at the Paris Salon. Mr. Grier's —So much attention is now being given to enamel-
portraiture has an acknowledged place in Canadian work that the portion of this volume which treats
art, for it abounds in excellent qualities. upon the practical side of the craft will be found

E. M. especially acceptable. Mr. Cunynghame devotes
the main portion of his treatise to the considera-

REVIEWS OF RECENT ^on °^ "Limoges" enamels and the method of

■PTTT3T irnTiriMC their execution. He speaks with the experience of

a practical man, and the technical instruction he

The Seven Ages of Golf. Portrayed by J. gives cannot fail to be of value to the student"