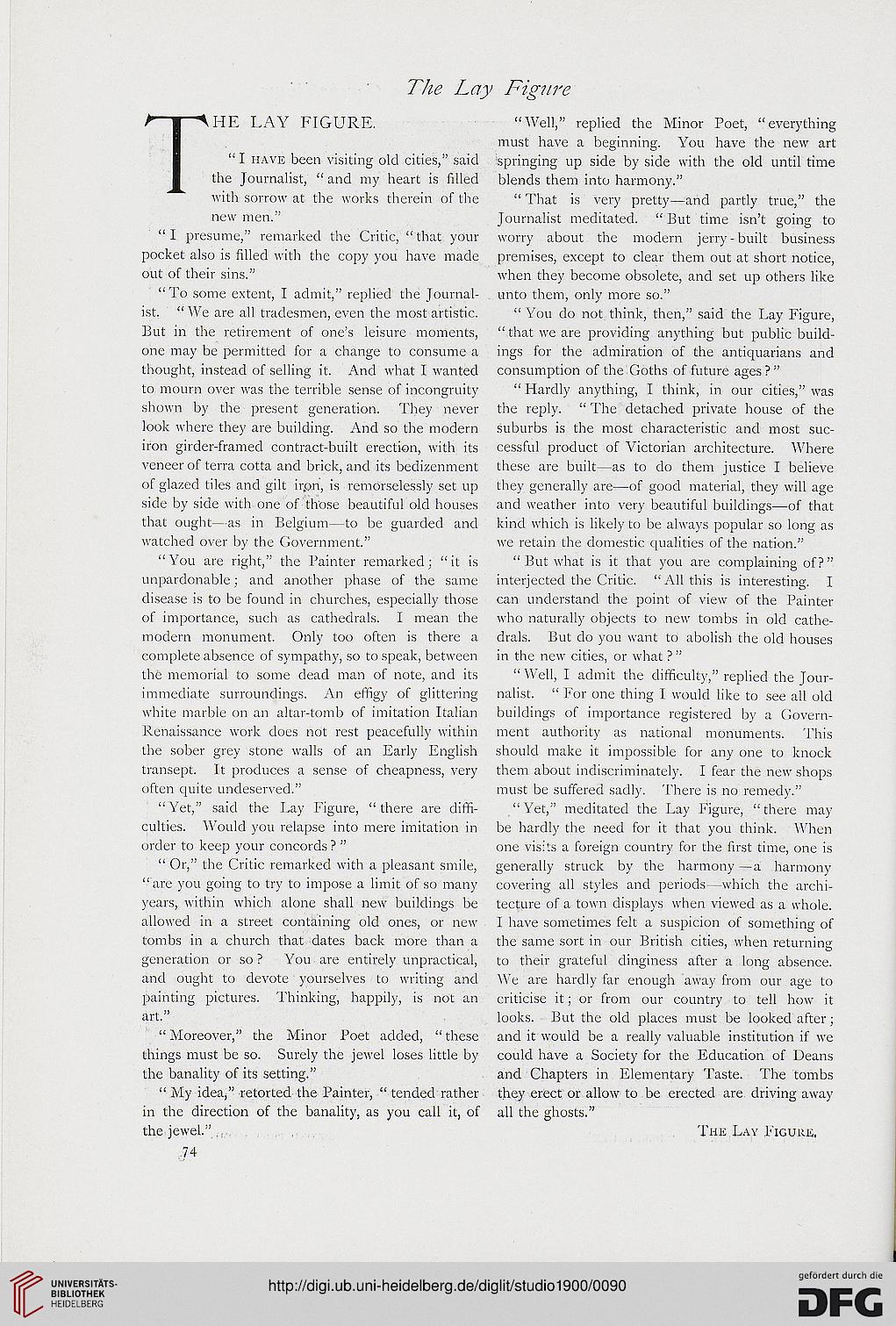 THE LAY FIGURE. "Well," replied the Minor Poet, "everything
must have a beginning. You have the new art

" I have been visiting old cities," said springing up side by side with the old until time

the Journalist, " and my heart is filled blends them into harmony."

with sorrow at the works therein of the " That is very pretty—and partly true," the

" I presume," remarked the Critic, " that your worry about the modern jerry - built business

pocket also is filled with the copy you have made premises, except to clear them out at short notice,

out of their sins." when they become obsolete, and set up others like

" To some extent, I admit," replied the Journal- unto them, only more so."
ist. " We are all tradesmen, even the most artistic. " You do not think, then," said the Lay Figure,
But in the retirement of one's leisure moments, " that we are providing anything but public build-
one may be permitted for a change to consume a ings for the admiration of the antiquarians and
thought, instead of selling it. And what I wanted consumption of the Goths of future ages?"
to mourn over was the terrible sense of incongruity " Hardly anything, I think, in our cities," was
shown by the present generation. They never the reply. " The detached private house of the
look where they are building. And so the modern suburbs is the most characteristic and most suc-
iron girder-framed contract-built erection, with its cessful product of Victorian architecture. Where
veneer of terra cotta and brick, and its bedizenment these are built—as to do them justice I believe
of glazed tiles and gilt irpn, is remorselessly set up they generally are—of good material, they will age
side by side with one of those beautiful old houses and weather into very beautiful buildings—of that
that ought—as in Belgium—to be guarded and kind which is likely to be always popular so long as
watched over by the Government." we retain the domestic qualities of the nation."

"You are right," the Painter remarked; "it is " But what is it that you are complaining of?"

unpardonable; and another phase of the same interjected the Critic. " All this is interesting. I

disease is to be found in churches, especially those can understand the point of view of the Painter

of importance, such as cathedrals. I mean the who naturally objects to new tombs in old cathe-

modern monument. Only too often is there a drals. But do you want to abolish the old houses

complete absence of sympathy, so to speak, between in the new cities, or what ? "

the memorial to some dead man of note, and its " Well, I admit the difficulty," replied the Jour-
immediate surroundings. An effigy of glittering nalist. " For one thing I would like to see all old
white marble on an altar-tomb of imitation Italian buildings of importance registered by a Govern-
Renaissance work does not rest peacefully within ment authority as national monuments. This
the sober grey stone walls of an Early English should make it impossible for any one to knock
transept. It produces a sense of cheapness, very them about indiscriminately. I fear the new shops
often quite undeserved." must be suffered sadly. There is no remedy."

culties. Would you relapse into mere imitation in be hardly the need for it that you think. When

order to keep your concords ? " one visits a foreign country for the first time, one is

" Or," the Critic remarked with a pleasant smile, generally struck by the harmony —a harmony

years, within which alone shall new buildings be tecture of a town displays when viewed as a whole,

allowed in a street containing old ones, or new I have sometimes felt a suspicion of something of

tombs in a church that dates back more than a the same sort in our British cities, when returning

generation or so ? You are entirely unpractical, to their grateful dinginess after a long absence,

painting pictures. Thinking, happily, is not an criticise it ; or from our country to tell how it

art." looks. But the old places must be looked after;

" Moreover," the Minor Poet added, " these and it would be a really valuable institution if we

things must be so. Surely the jewel loses little by could have a Society for the Education of Deans

the banality of its setting." and Chapters in Elementary Taste. The tombs

" My idea," retorted the Painter, " tended rather they erect or allow to be erected are driving away

in the direction of the banality, as you call it, of all the ghosts."