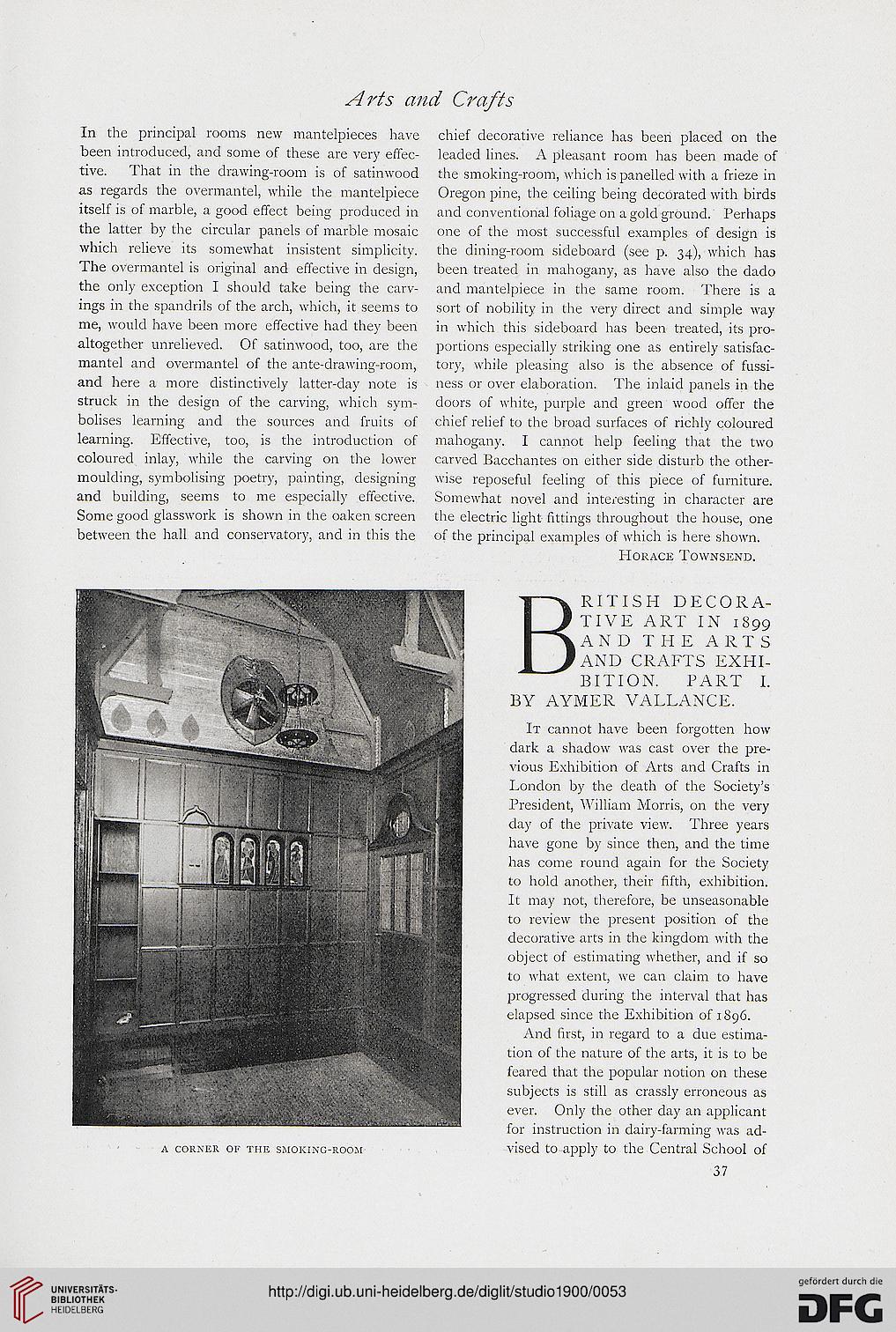 In the principal rooms new mantelpieces have chief decorative reliance has been placed on the
been introduced, and some of these are very effec- leaded lines. A pleasant room has been made of
tive. That in the drawing-room is of satinwood the smoking-room, which is panelled with a frieze in
as regards the overmantel, while the mantelpiece Oregon pine, the ceiling being decorated with birds
itself is of marble, a good effect being produced in and conventional foliage on a gold ground. Perhaps
the latter by the circular panels of marble mosaic one of the most successful examples of design is
which relieve its somewhat insistent simplicity, the dining-room sideboard (see p. 34), which has
The overmantel is original and effective in design, been treated in mahogany, as have also the dado
the only exception I should take being the carv- and mantelpiece in the same room. There is a
ings in the spandrils of the arch, which, it seems to sort of nobility in the very direct and simple way
me, would have been more effective had they been in which this sideboard has been treated, its pro-
altogether unrelieved. Of satinwood, too, are the portions especially striking one as entirely satisfac-
mantel and overmantel of the ante-drawing-room, tory, while pleasing also is the absence of fussi-
and here a more distinctively latter-day note is ness or over elaboration. The inlaid panels in the
struck in the design of the carving, which sym- doors of white, purple and green wood offer the
bolises learning and the sources and fruits of chief relief to the broad surfaces of richly coloured
learning. Effective, too, is the introduction of mahogany. I cannot help feeling that the two
coloured inlay, while the carving on the lower carved Bacchantes on either side disturb the other-
moulding, symbolising poetry, painting, designing wise reposeful feeling of this piece of furniture,
and building, seems to me especially effective. Somewhat novel and interesting in character are
Some good glasswork is shown in the oaken screen the electric light fittings throughout the house, one
between the hall and conservatory, and in this the of the principal examples of which is here shown.

BRITISH DECORA-
TIVE ART IN 1899
AND THE ARTS
AND CRAFTS EXHI-
BITION. PART I.
BY AYMER VALLANCE.

dark a shadow was cast over the pre-
vious Exhibition of Arts and Crafts in
London by the death of the Society's
I President, William Morris, on the very

day of the private view. Three years
have gone by since then, and the time
has come round again for the Society
to hold another, their fifth, exhibition.
It may not, therefore, be unseasonable
to review the present position of the
decorative arts in the kingdom with the
object of estimating whether, and if so
to what extent, we can claim to have
progressed during the interval that has
elapsed since the Exhibition of 1896.

And first, in regard to a due estima-
tion of the nature of the arts, it is to be
feared that the popular notion on these
subjects is still as crassly erroneous as
ever. Only the other day an applicant