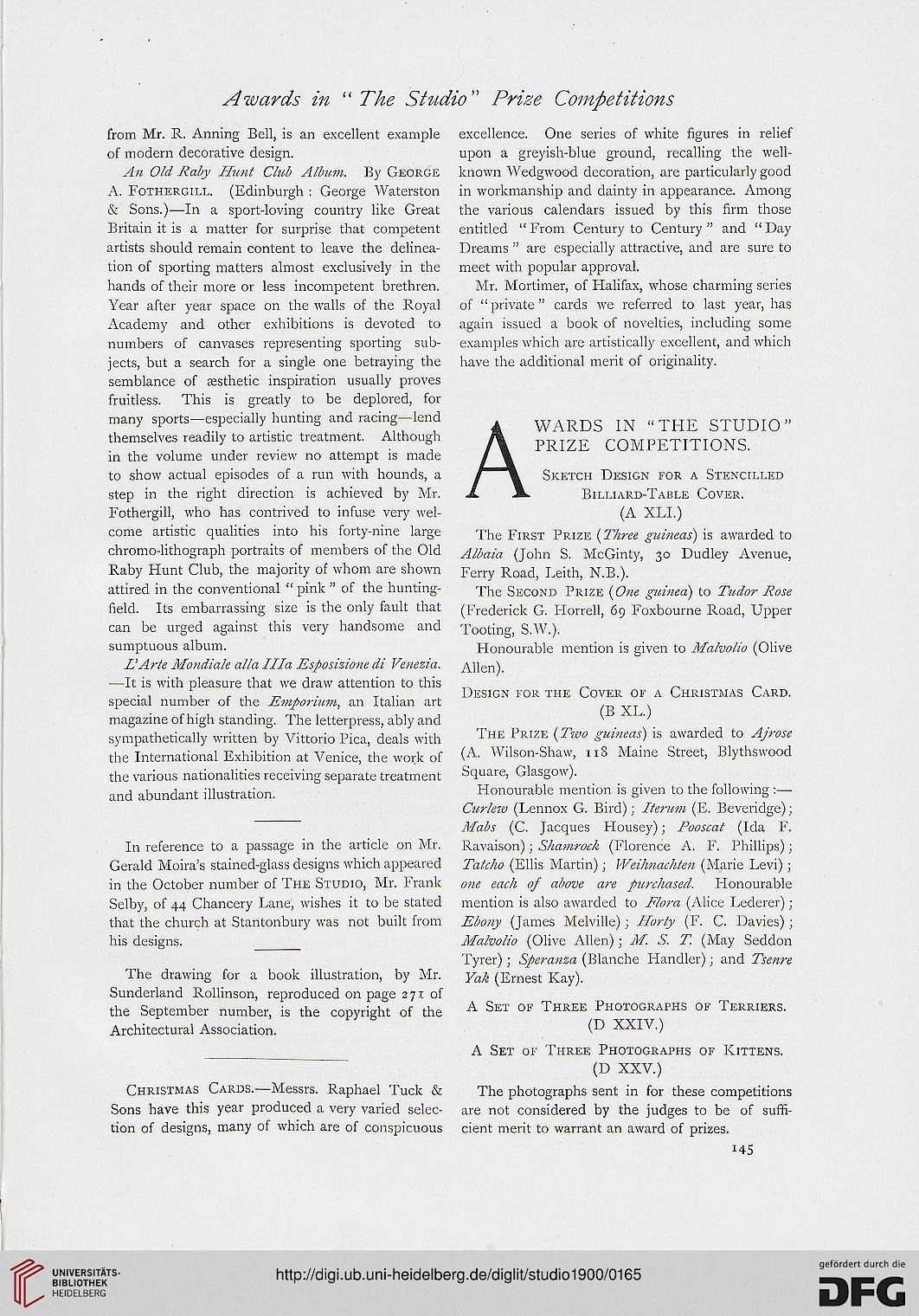 from Mr. R. Arming Bell, is an excellent example
of modern decorative design.

An Old Raby Hunt Club Album. By George
A. Fothergill. (Edinburgh : George Waterston
& Sons.)—In a sport-loving country like Great
Britain it is a matter for surprise that competent
artists should remain content to leave the delinea-
tion of sporting matters almost exclusively in the
hands of their more or less incompetent brethren.
Year after year space on the walls of the Royal
Academy and other exhibitions is devoted to
numbers of canvases representing sporting sub-
jects, but a search for a single one betraying the
semblance of aesthetic inspiration usually proves
fruitless. This is greatly to be deplored, for
many sports—especially hunting and racing—lend
themselves readily to artistic treatment. Although
in the volume under review no attempt is made
to show actual episodes of a run with hounds, a
step in the right direction is achieved by Mr.
Fothergill, who has contrived to infuse very wel-
come artistic qualities into his forty-nine large
chromo-lithograph portraits of members of the Old
Raby Hunt Club, the majority of whom are shown
attired in the conventional " pink " of the hunting-
field. Its embarrassing size is the only fault that
can be urged against this very handsome and
sumptuous album.

EArte Mondiale alia Ilia Esposizione di Venezia.
—It is with pleasure that we draw attention to this
special number of the Emporium, an Italian art
magazine of high standing. The letterpress, ably and
sympathetically written by Vittorio Pica, deals with
the International Exhibition at Venice, the worjt of
the various nationalities receiving separate treatment
and abundant illustration.

In reference to a passage in the article on Mr.
Gerald Moira's stained-glass designs which appeared
in the October number of The Studio, Mr. Frank
Selby, of 44 Chancery Lane, wishes it to be stated
that the church at Stantonbury was not built from
his designs. _

The drawing for a book illustration, by Mr.
Sunderland Rollinson, reproduced on page 271 of
the September number, is the copyright of the
Architectural Association.

Christmas Cards.—Messrs. Raphael Tuck &
Sons have this year produced a very varied selec-
tion of designs, many of which are of conspicuous

excellence. One series of white figures in relief
upon a greyish-blue ground, recalling the well-
known Wedgwood decoration, are particularly good
in workmanship and dainty in appearance. Among
the various calendars issued by this firm those
entitled "From Century to Century" and "Day
Dreams " are especially attractive, and are sure to
meet with popular approval.

Mr. Mortimer, of Halifax, whose charming series
of "private" cards we referred to last year, has
again issued a book of novelties, including some
examples which are artistically excellent, and which
have the additional merit of originality.

AWARDS IN "THE STUDIO"
PRIZE COMPETITIONS.
Sketch Design for a Stencilled
Billiard-Table Cover.
(A XLI.)

Honourable mention is given to Malvolio (Olive
Allen).

Design for the Cover of a Christmas Card.
(B XL.)

A Set of Three Photographs of Terriers.
(D XXIV.)

A Set of Three Photographs of Kittens.
(D XXV.)

The photographs sent in for these competitions
are not considered by the judges to be of suffi-
cient merit to warrant an award of prizes.