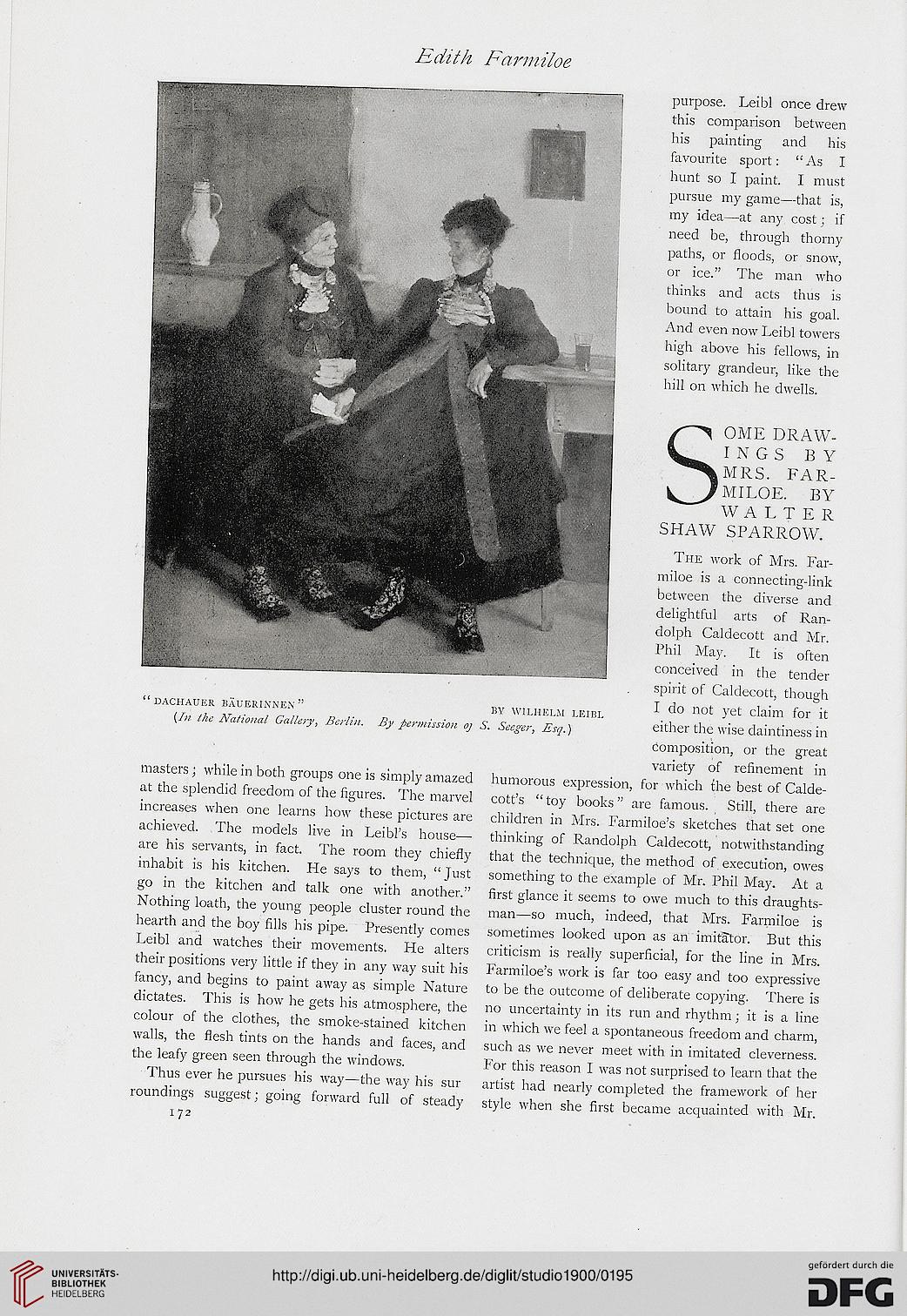 purpose. Leibl once drew
this comparison between
his painting and his
favourite sport: "As I
hunt so I paint. I must
pursue my game—that is,
my idea—at any cost; if
need be, through thorny
paths, or floods, or snow,
or ice." The man who
thinks and acts thus is
bound to attain his goal.
And even now Leibl towers
high above his fellows, in
solitary grandeur, like the
hill on which he dwells.

The work of Mrs. Far-
miloe is a connecting-link
between the diverse and
delightful arts of Ran-
dolph Caldecott and Mr.
Phil May. It is often
conceived in the tender
spirit of Caldecott, though

(In the National Gallery, Berlin. By permission oj S. Seeger, Esq.) either the wise daintiness in

composition, or the great
variety of refinement in

masters ; while in both groups one is simply amazed humorous expression, for which the best of Calde-
at the splendid freedom of the figures. The marvel cott's " toy books " are famous. Still, there are
increases when one learns how these pictures are children in Mrs. Farmiloe's sketches that set one
achieved. The models live in Leibl's house—■ thinking of Randolph Caldecott, notwithstanding
are his servants, in fact. The room they chiefly that the technique, the method of execution, owes
inhabit is his kitchen. He says to them, " Just something to the example of Mr. Phil May. At a
go in the kitchen and talk one with another." first glance it seems to owe much to this draughts-
Nothing loath, the young people cluster round the man—so much, indeed, that Mrs. Farmiloe is
hearth and the boy fills his pipe. Presently comes sometimes looked upon as an imitator. But this
Leibl and watches their movements. He alters criticism is really superficial, for the line in Mrs.
their positions very little if they in any way suit his Farmiloe's work is far too easy and too expressive
fancy, and begins to paint away as simple Nature to be the outcome of deliberate copying. There is
dictates. This is how he gets his atmosphere, the no uncertainty in its run and rhythm; it is a line
colour of the clothes, the smoke-stained kitchen in which we feel a spontaneous freedom and charm,
walls, the flesh tints on the hands and faces, and such as we never meet with in imitated cleverness,
the leafy green seen through the windows. For this reason I was not surprised to learn that the
Thus ever he pursues his way—the way his sur artist had nearly completed the framework of her
roundings suggest; going forward full of steady style when she first became acquainted with Mr.
172