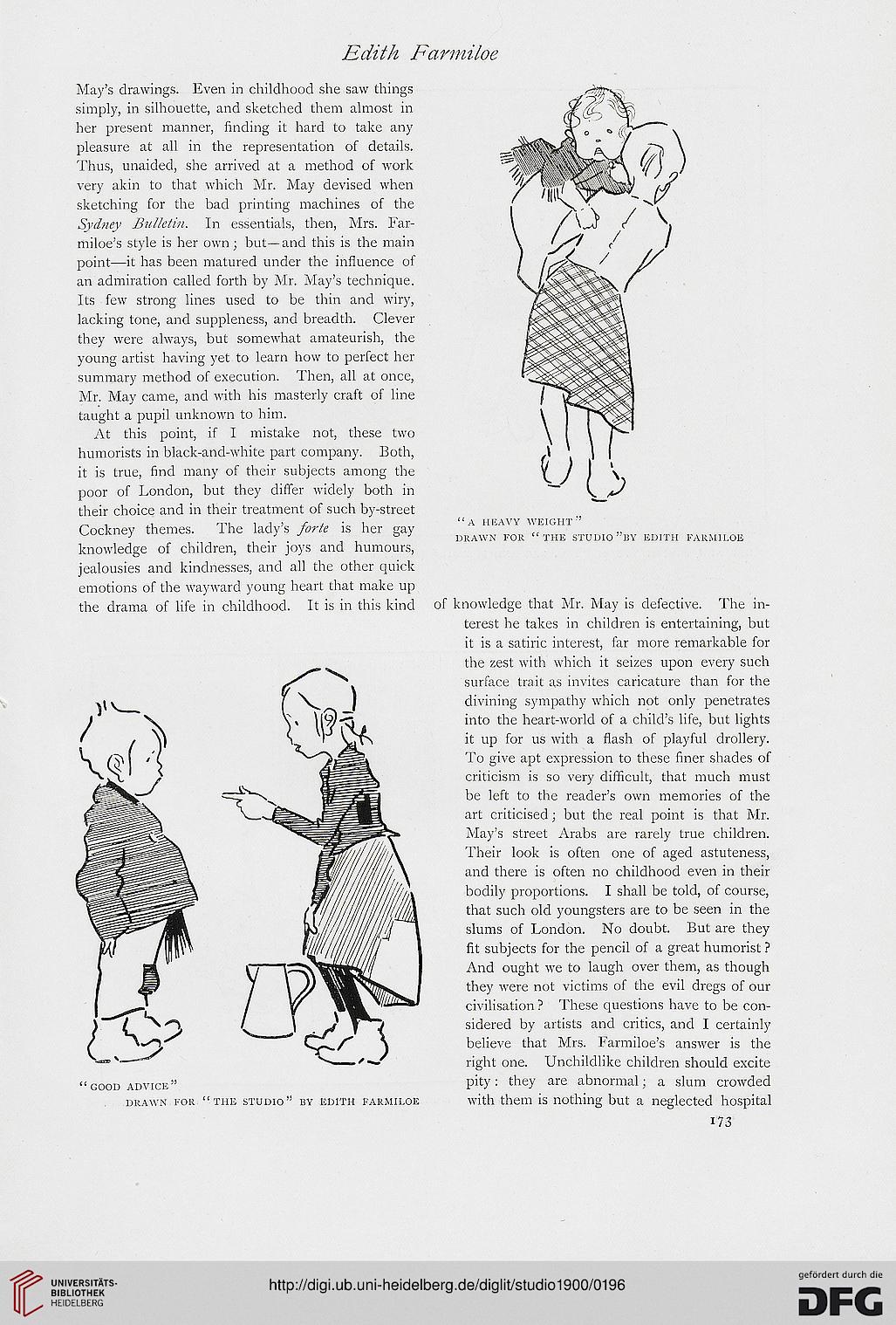 May's drawings. Even in childhood she saw things
simply, in silhouette, and sketched them almost in
her present manner, finding it hard to take any
pleasure at all in the representation of details.
Thus, unaided, she arrived at a method of work
very akin to that which Mr. May devised when
sketching for the bad printing machines of the
Sydney Bulletin. In essentials, then, Mrs. Far-
miloe's style is her own; but—and this is the main
point—it has been matured under the influence of
an admiration called forth by Mr. May's technique.
Its few strong lines used to be thin and wiry,
lacking tone, and suppleness, and breadth. Clever
they were always, but somewhat amateurish, the
young artist having yet to learn how to perfect her
summary method of execution. Then, all at once,
Mr. May came, and with his masterly craft of line
taught a pupil unknown to him.

At this point, if I mistake not, these two
humorists in black-and-white part company. Both,
it is true, find many of their subjects among the
poor of London, but they differ widely both in
their choice and in their treatment of such by-street
Cockney themes. The lady's forte is her gay
knowledge of children, their joys and humours,
jealousies and kindnesses, and all the other quick
emotions of the wayward young heart that make up
the drama of life in childhood. It is in this kind

DRAWN FOR "THE STUDIO" BY EDITH FARMILOE

DRAWN FOR " THE STUDIO "BY EDITH FARMILOE

of knowledge that Mr. May is defective. The in-
terest he takes in children is entertaining, but
it is a satiric interest, far more remarkable for
the zest with which it seizes upon every such
surface trait as invites caricature than for the
divining sympathy which not only penetrates
into the heart-world of a child's life, but lights
it up for us with a flash of playful drollery.
To give apt expression to these finer shades of
criticism is so very difficult, that much must
be left to the reader's own memories of the
art criticised; but the real point is that Mr.
May's street Arabs are rarely true children.
Their look is often one of aged astuteness,
and there is often no childhood even in their
bodily proportions. I shall be told, of course,
that such old youngsters are to be seen in the
slums of London. No doubt. But are they
fit subjects for the pencil of a great humorist ?
And ought we to laugh over them, as though
they were not victims of the evil dregs of our
civilisation ? These questions have to be con-
sidered by artists and critics, and I certainly
believe that Mrs. Farmiloe's answer is the
right one. Unchildlike children should excite
pity: they are abnormal; a slum crowded
with them is nothing but a neglected hospital