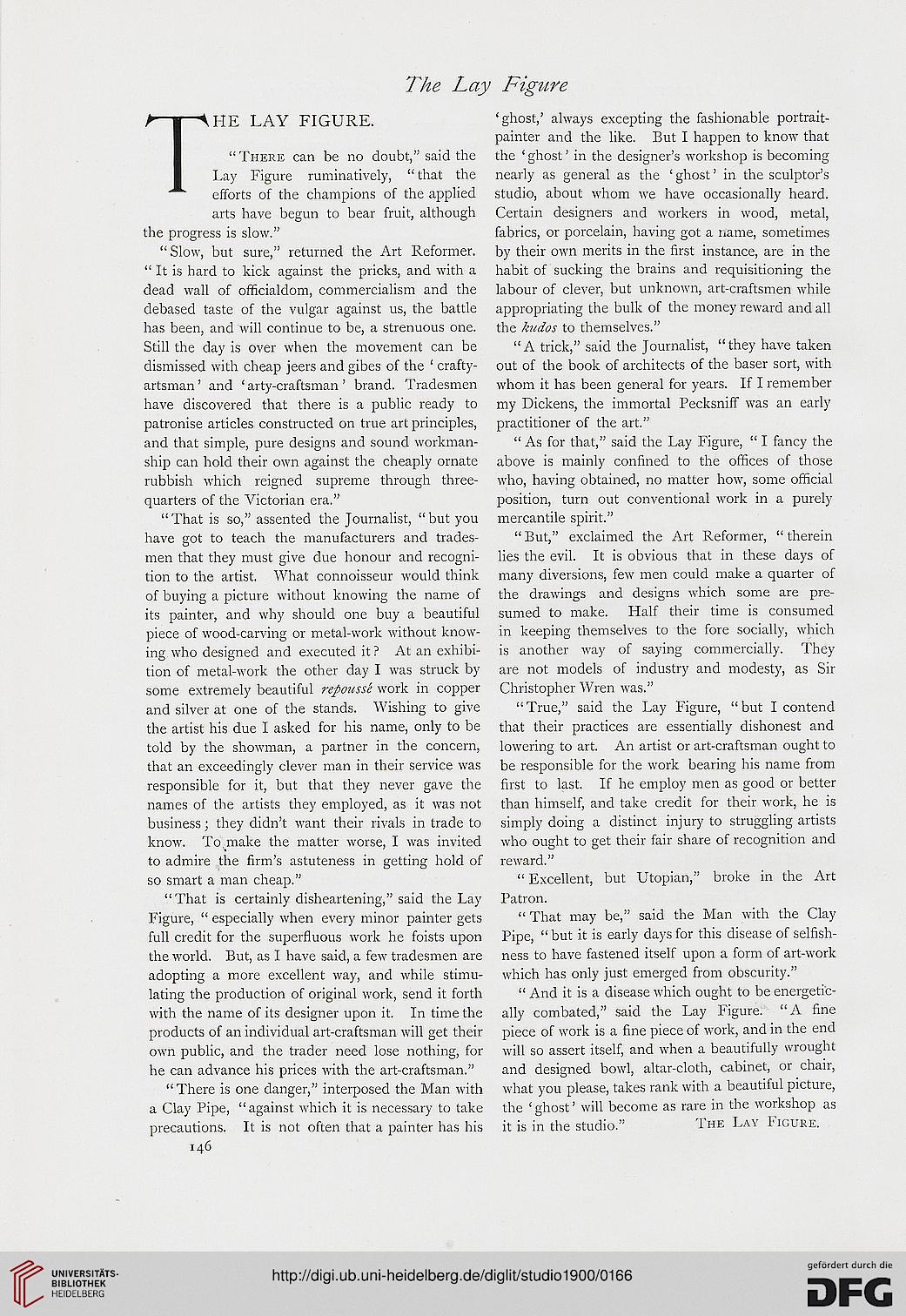 THE LAY FIGURE. 'ghost,' always excepting the fashionable portrait-
painter and the like. But I happen to know that

"There can be no doubt," said the the 'ghost' in the designer's workshop is becoming

Lay Figure ruminatively, " that the nearly as general as the ' ghost' in the sculptor's

efforts of the champions of the applied studio, about whom we have occasionally heard,

arts have begun to bear fruit, although Certain designers and workers in wood, metal,

the progress is slow." fabrics, or porcelain, having got a name, sometimes

"Slow, but sure," returned the Art Reformer, by their own merits in the first instance, are in the

" It is hard to kick against the pricks, and with a habit of sucking the brains and requisitioning the

dead wall of officialdom, commercialism and the labour of clever, but unknown, art-craftsmen while

debased taste of the vulgar against us, the battle appropriating the bulk of the money reward and all

has been, and will continue to be, a strenuous one. the kudos to themselves."

Still the day is over when the movement can be "A trick," said the Journalist, "they have taken

dismissed with cheap jeers and gibes of the ' crafty- out of the book of architects of the baser sort, with

artsman' and ' arty-craftsman ' brand. Tradesmen whom it has been general for years. If I remember

have discovered that there is a public ready to my Dickens, the immortal Pecksniff was an early

and that simple, pure designs and sound workman- " As for that," said the Lay Figure, " I fancy the

rubbish which reigned supreme through three- who, having obtained, no matter how, some official

quarters of the Victorian era." position, turn out conventional work in a purely

" That is so," assented the Journalist, " but you mercantile spirit."
have got to teach the manufacturers and trades- " But," exclaimed the Art Reformer, " therein

men that they must give due honour and recogni- lies the evil. It is obvious that in these days of

tion to the artist. What connoisseur would think many diversions, few men could make a quarter of

its painter, and why should one buy a beautiful sumed to make. Half their time is consumed

piece of wood-carving or metal-work without know- in keeping themselves to the fore socially, which

ing who designed and executed it? At an exhibi- is another way of saying commercially. They

tion of metal-work the other day I was struck by are not models of industry and modesty, as Sir

some extremely beautiful repousse work in copper Christopher Wren was."

and silver at one of the stands. Wishing to give "True," said the Lay Figure, "but I contend

the artist his due I asked for his name, only to be that their practices are essentially dishonest and

told by the showman, a partner in the concern, lowering to art. An artist or art-craftsman ought to

responsible for it, but that they never gave the first to last. If he employ men as good or better

names of the artists they employed, as it was not than himself, and take credit for their work, he is

business; they didn't want their rivals in trade to simply doing a distinct injury to struggling artists

know. To'.make the matter worse, I was invited who ought to get their fair share of recognition and

to admire the firm's astuteness in getting hold of reward."

so smart a man cheap." " Excellent, but Utopian," broke in the Art

"That is certainly disheartening," said the Lay Patron.
Figure, " especially when every minor painter gets " That may be," said the Man with the Clay

full credit for the superfluous work he foists upon Pipe, " but it is early days for this disease of selfish-

the world. But, as I have said, a few tradesmen are ness to have fastened itself upon a form of art-work

adopting a more excellent way, and while stimu- which has only just emerged from obscurity."
lating the production of original work, send it forth " And it is a disease which ought to be energetic-

with the name of its designer upon it. In time the ally combated," said the Lay Figure. "A fine

own public, and the trader need lose nothing, for will so assert itself, and when a beautifully wrought

he can advance his prices with the art-craftsman." and designed bowl, altar-cloth, cabinet, or chair,

" There is one danger," interposed the Man with what you please, takes rank with a beautiful picture,

a Clay Pipe, "against which it is necessary to take the 'ghost' will become as rare in the workshop as

precautions. It is not often that a painter has his it is in the studio." The Lav Figure.