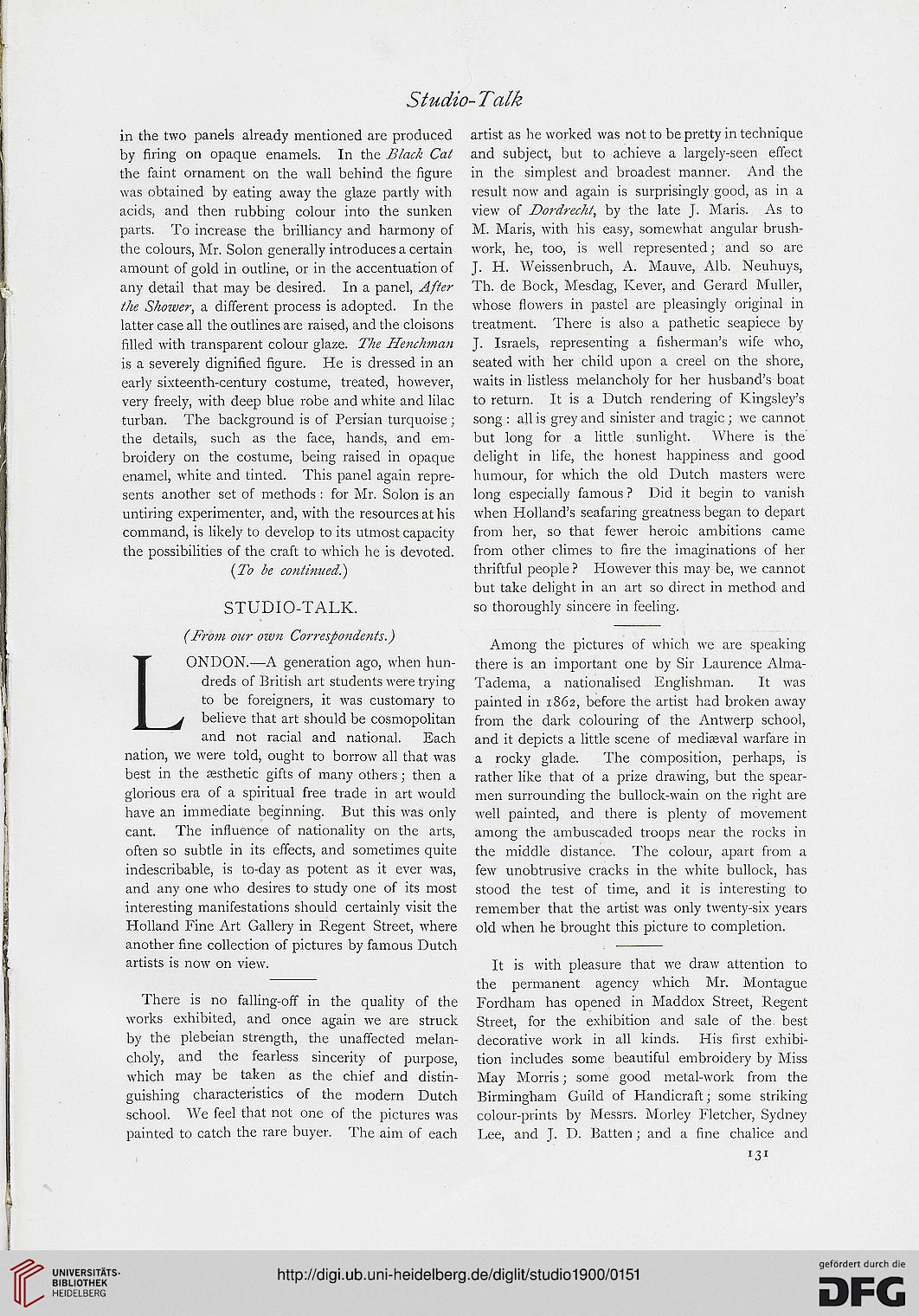 in the two panels already mentioned are produced
by firing on opaque enamels. In the Black Cat
the faint ornament on the wall behind the figure
was obtained by eating away the glaze partly with
acids, and then rubbing colour into the sunken
parts. To increase the brilliancy and harmony of
the colours, Mr. Solon generally introduces a certain
amount of gold in outline, or in the accentuation of
any detail that may be desired. In a panel, After
the Shower, a different process is adopted. In the
latter case all the outlines are raised, and the cloisons
filled with transparent colour glaze. The Henchman
is a severely dignified figure. He is dressed in an
early sixteenth-century costume, treated, however,
very freely, with deep blue robe and white and lilac
turban. The background is of Persian turquoise ;
the details, such as the face, hands, and em-
broidery on the costume, being raised in opaque
enamel, white and tinted. This panel again repre-
sents another set of methods : for Mr. Solon is an
untiring experimenter, and, with the resources at his
command, is likely to develop to its utmost capacity
the possibilities of the craft to which he is devoted.
(To be continued.)

LONDON.—A generation ago, when hun-
dreds of British art students were trying
to be foreigners, it was customary to
believe that art should be cosmopolitan
and not racial and national. Each
nation, we were told, ought to borrow all that was
best in the aesthetic gifts of many others; then a
glorious era of a spiritual free trade in art would
have an immediate beginning. But this was only
cant. The influence of nationality on the arts,
often so subtle in its effects, and sometimes quite
indescribable, is to-day as potent as it ever was,
and any one who desires to study one of its most
interesting manifestations should certainly visit the
Holland Fine Art Gallery in Regent Street, where
another fine collection of pictures by famous Dutch
artists is now on view.

There is no falling-off in the quality of the
works exhibited, and once again we are struck
by the plebeian strength, the unaffected melan-
choly, and the fearless sincerity of purpose,
which may be taken as the chief and distin-
guishing characteristics of the modern Dutch
school. We feel that not one of the pictures was
painted to catch the rare buyer. The aim of each

artist as he worked was not to be pretty in technique
and subject, but to achieve a largely-seen effect
in the simplest and broadest manner. And the
result now and again is surprisingly good, as in a
view of Dordrecht, by the late J. Maris. As to
M. Maris, with his easy, somewhat angular brush-
work, he, too, is well represented; and so are
J. H. Weissenbruch, A. Mauve, Alb. Neuhuys,
Th. de Bock, Mesdag, Kever, and Gerard Muller,
whose flowers in pastel are pleasingly original in
treatment. There is also a pathetic seapiece by
J. Israels, representing a fisherman's wife who,
seated with her child upon a creel on the shore,
waits in listless melancholy for her husband's boat
to return. It is a Dutch rendering of Kingsley's
song : all is grey and sinister and tragic ; we cannot
but long for a little sunlight. Where is the
delight in life, the honest happiness and good
humour, for which the old Dutch masters were
long especially famous ? Did it begin to vanish
when Holland's seafaring greatness began to depart
from her, so that fewer heroic ambitions came
from other climes to fire the imaginations of her
thriftful people ? However this may be, we cannot
but take delight in an art so direct in method and
so thoroughly sincere in feeling.

Among the pictures of which we are speaking
there is an important one by Sir Laurence Alma-
Tadema, a nationalised Englishman. It was
painted in 1862, before the artist had broken away
from the dark colouring of the Antwerp school,
and it depicts a little scene of mediaeval warfare in
a rocky glade. The composition, perhaps, is
rather like that of a prize drawing, but the spear-
men surrounding the bullock-wain on the right are
well painted, and there is plenty of movement
among the ambuscaded troops near the rocks in
the middle distance. The colour, apart from a
few unobtrusive cracks in the white bullock, has
stood the test of time, and it is interesting to
remember that the artist was only twenty-six years
old when he brought this picture to completion.

It is with pleasure that we draw attention to
the permanent agency which Mr. Montague
Fordham has opened in Maddox Street, Regent
Street, for the exhibition and sale of the best
decorative work in all kinds. His first exhibi-
tion includes some beautiful embroidery by Miss
May Morris; some good metal-work from the
Birmingham Guild of Handicraft; some striking
colour-prints by Messrs. Morley Fletcher, Sydney
Lee, and J. D. Batten; and a fine chalice and