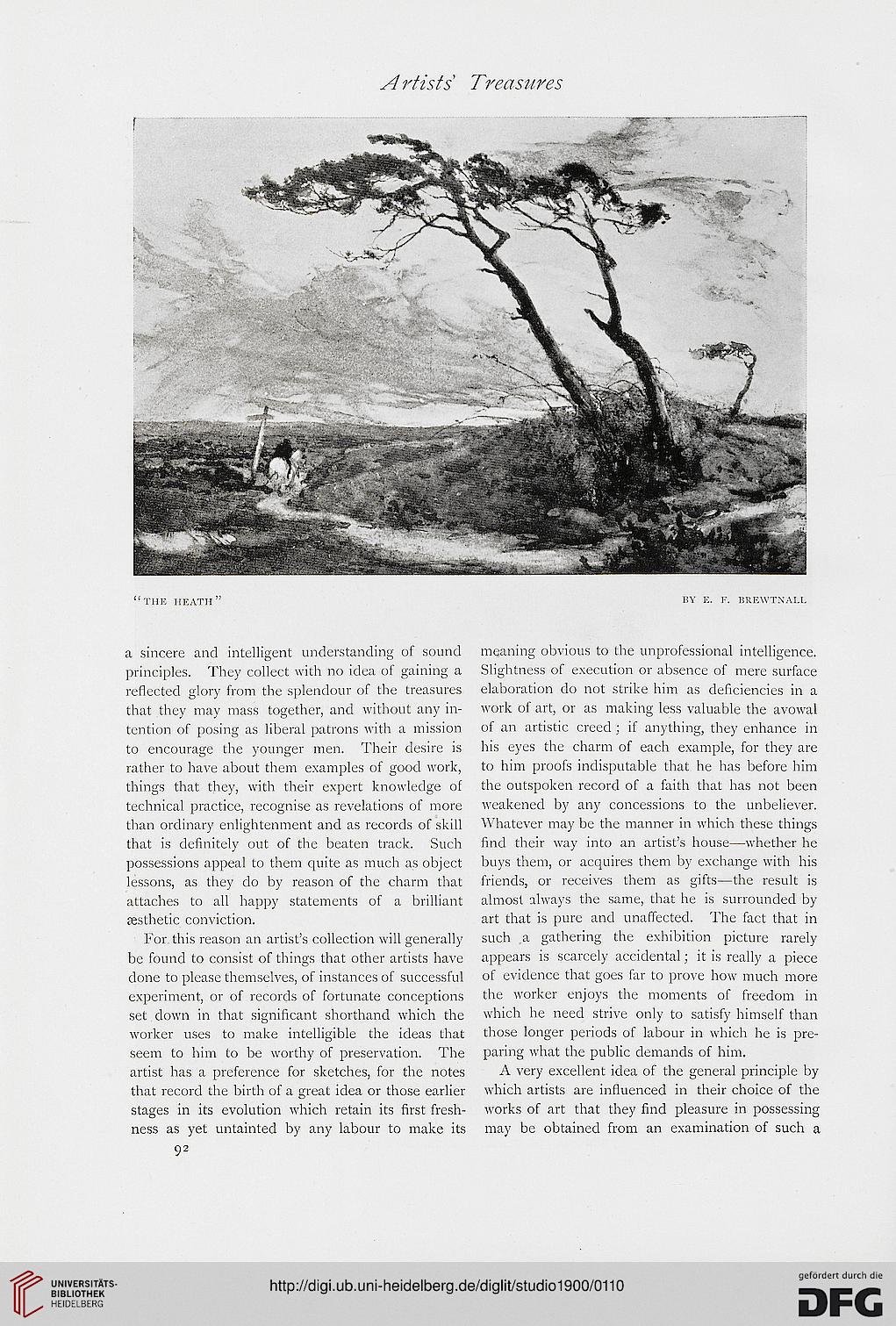 "the heath" by e. f. brewtnall

a sincere and intelligent understanding of sound
principles. They collect with no idea of gaining a
reflected glory from the splendour of the treasures
that they may mass together, and without any in-
tention of posing as liberal patrons with a mission
to encourage the younger men. Their desire is
rather to have about them examples of good work,
things that they, with their expert knowledge of
technical practice, recognise as revelations of more
than ordinary enlightenment and as records of skill
that is definitely out of the beaten track. Such
possessions appeal to them quite as much as object
lessons, as they do by reason of the charm that
attaches to all happy statements of a brilliant
sesthetic conviction.

l'"or this reason an artist's collection will generally
be found to consist of things that other artists have
done to please themselves, of instances of successful
experiment, or of records of fortunate conceptions
set. down in that significant shorthand which the
worker uses to make intelligible the ideas that
seem to him to be worthy of preservation. The
artist has a preference for sketches, for the notes
that record the birth of a great idea or those earlier
stages in its evolution which retain its first fresh-
ness as yet untainted by any labour to make its
92

meaning obvious to the unprofessional intelligence.
Slightness of execution or absence of mere surface
elaboration do not strike him as deficiencies in a
work of art, or as making less valuable the avowal
of an artistic creed ; if anything, they enhance in
his eyes the charm of each example, for they are
to him proofs indisputable that he has before him
the outspoken record of a faith that has not been
weakened by any concessions to the unbeliever.
Whatever may be the manner in which these things
find their way into an artist's house—whether he
buys them, or acquires them by exchange with his
friends, or receives them as gifts—the result is
almost always the same, that he is surrounded by
art that is pure and unaffected. The fact that in
such a gathering the exhibition picture rarely
appears is scarcely accidental; it is really a piece
of evidence that goes far to prove how much more
the worker enjoys the moments of freedom in
which he need strive only to satisfy himself than
those longer periods of labour in which he is pre-
paring what the public demands of him.