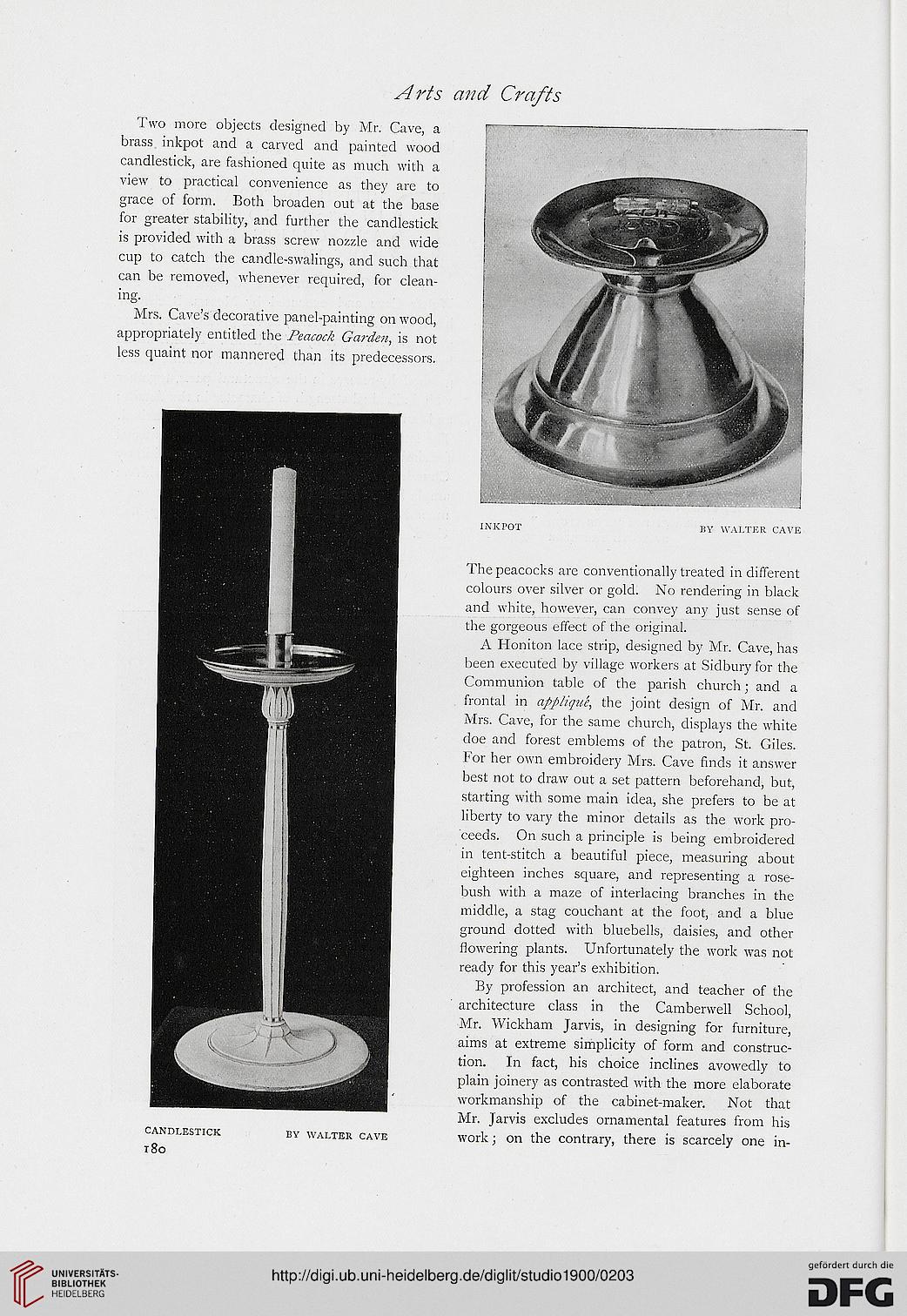 Two more objects designed by Mr. Cave, a
brass inkpot and a carved and painted wood
candlestick, are fashioned quite as much with a
view to practical convenience as they are to
grace of form. Both broaden out at the base
for greater stability, and further the candlestick
is provided with a brass screw nozzle and wide
cup to catch the candle-swalings, and such that
can be removed, whenever required, for clean-
ing.

Mrs. Cave's decorative panel-painting on wood,
appropriately entitled the Peacock Garden, is not
less quaint nor mannered than its predecessors.

The peacocks are conventionally treated in different
colours over silver or gold. No rendering in black
and white, however, can convey any just sense of
the gorgeous effect of the original.

A Honiton lace strip, designed by Mr. Cave, has
been executed by village workers at Sidbury for the
Communion table of the parish church; and a
frontal in appliqui, the joint design of Mr. and
Mrs. Cave, for the same church, displays the white
doe and forest emblems of the patron, St. Giles.
For her own embroidery Mrs. Cave finds it answer
best not to draw out a set pattern beforehand, but,
starting with some main idea, she prefers to be at
liberty to vary the minor details as the work pro-
ceeds. On such a principle is being embroidered
in tent-stitch a beautiful piece, measuring about
eighteen inches square, and representing a rose-
bush with a maze of interlacing branches in the
middle, a stag couchant at the foot, and a blue
ground dotted with bluebells, daisies, and other
flowering plants. Unfortunately the work was not
ready for this year's exhibition.

By profession an architect, and teacher of the
architecture class in the Camberwell School,
Mr. Wickham Jarvis, in designing for furniture,
aims at extreme simplicity of form and construc-
tion. In fact, his choice inclines avowedly to
plain joinery as contrasted with the more elaborate
workmanship of the cabinet-maker. Not that
Mr. Jarvis excludes ornamental features from his
candlestick by Walter cave work; on the contrary, there is scarcely one in-