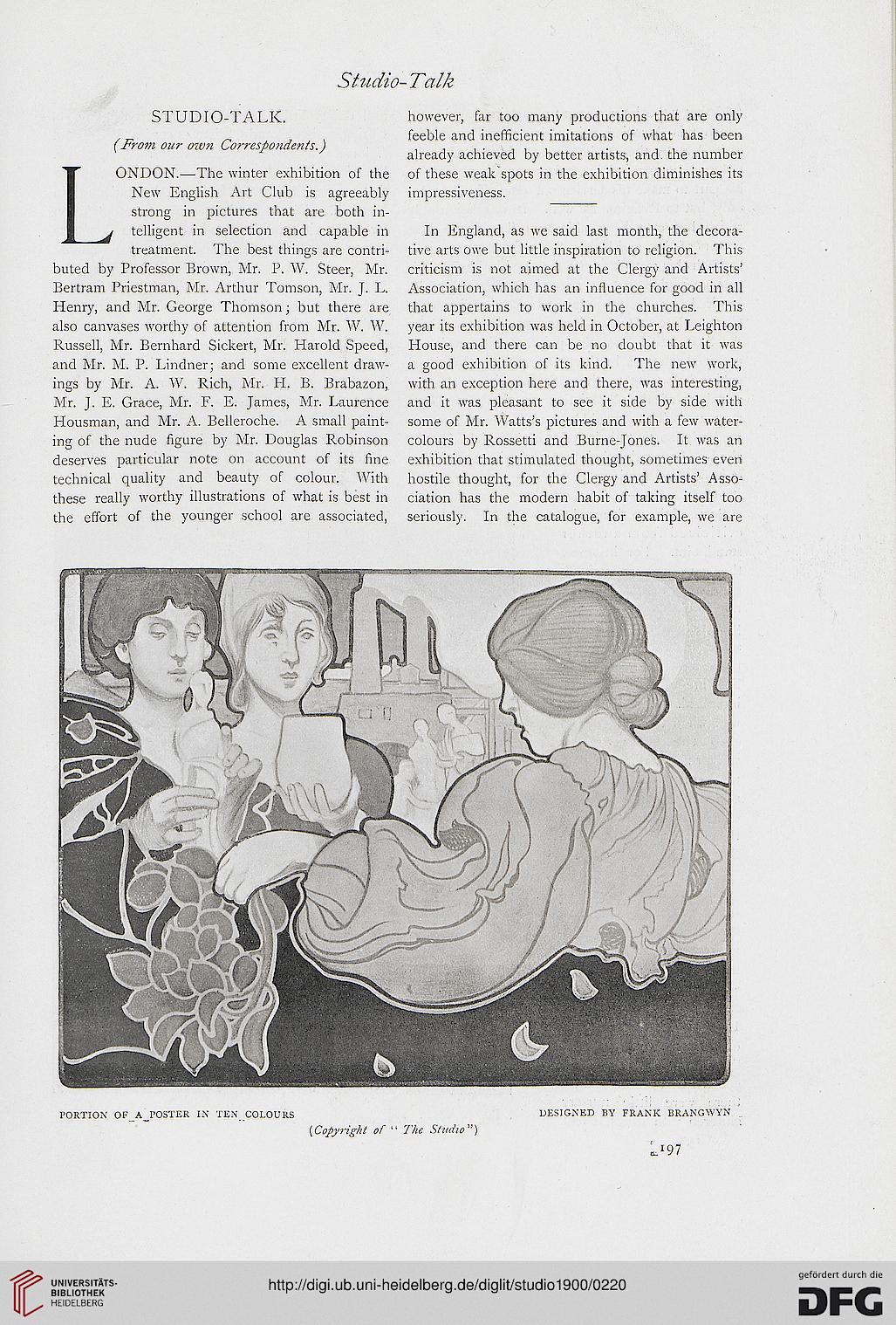 STUDIO-TALK. however, far too many productions that are only

feeble and inefficient imitations of what has been
already achieved by better artists, and. the number
ONDON.—The winter exhibition of the of these weak spots in the exhibition diminishes its
New English Art Club is agreeably impressiveness.

Lstrong in pictures that are both in-
telligent in selection and capable in In England, as we said last month, the decora-
treatment. The best things are contri- tive arts owe but little inspiration to religion. This
buted by Professor Brown, Mr. P. W. Steer, Mr. criticism is not aimed at the Clergy and Artists'
Bertram Priestman, Mr. Arthur Tomson, Mr. J. L. Association, which has an influence for good in all
Henry, and Mr. George Thomson; but there are that appertains to work in the churches. This
also canvases worthy of attention from Mr. W. W. year its exhibition was held in October, at Leighton
Russell, Mr. Bernhard Sickert, Mr. Harold Speed, House, and there can be no doubt that it was
and Mr. M. P. Lindner; and some excellent draw- a good exhibition of its kind. The new work,
ings by Mr. A. W. Rich, Mr. H. B. Brabazon, with an exception here and there, was interesting,
Mr. J. E. Grace, Mr. F. E. James, Mr. Laurence and it was pleasant to see it side by side with
Housman, and Mr. A. Belleroche. A small paint- some of Mr. Watts's pictures and with a few water-
ing of the nude figure by Mr. Douglas Robinson colours by Rossetti and Burne-Jones. It was an
deserves particular note on account of its fine exhibition that stimulated thought, sometimes even
technical quality and beauty of colour. With hostile thought, for the Clergy and Artists' Asso-
these really worthy illustrations of what is best in ciation has the modern habit of taking itself too
the effort of the younger school are associated, seriously. In the catalogue, for example, we are

[Copyright of " The Studio")