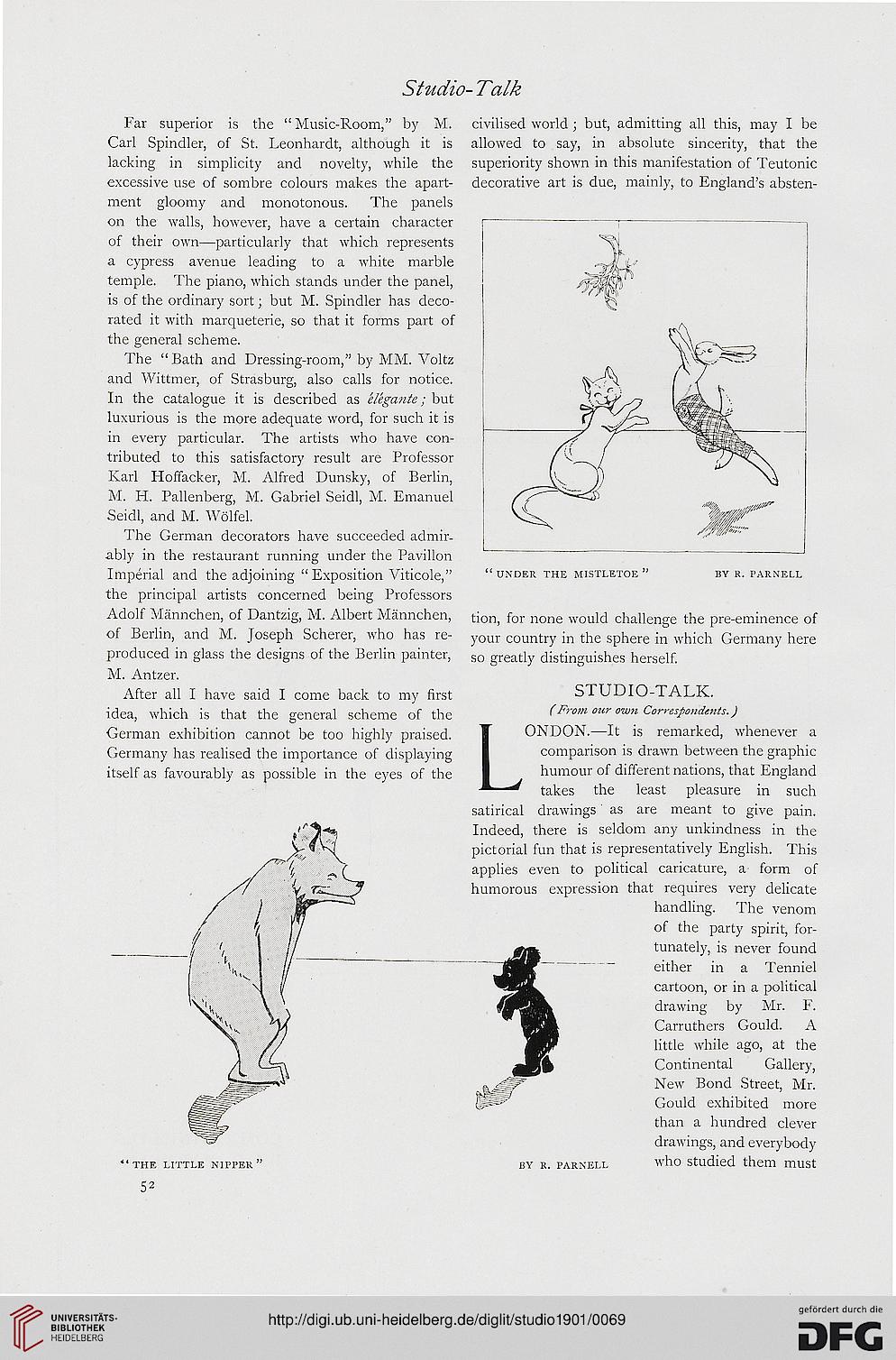 Far superior is the "Music-Room," by M. civilised world; but, admitting all this, may I be
Carl Spindler, of St. Leonhardt, although it is allowed to say, in absolute sincerity, that the
lacking in simplicity and novelty, while the superiority shown in this manifestation of Teutonic
excessive use of sombre colours makes the apart- decorative art is due, mainly, to England's absten-
ment gloomy and monotonous. The panels
on the walls, however, have a certain character
of their own—particularly that which represents
a cypress avenue leading to a white marble
temple. The piano, which stands under the panel,
is of the ordinary sort; but M. Spindler has deco-
rated it with marqueterie, so that it forms part of
the general scheme.

The " Bath and Dressing-room," by MM. Voltz
and Wittmer, of Strasburg, also calls for notice.
In the catalogue it is described as elegante; but
luxurious is the more adequate word, for such it is
in every particular. The artists who have con-
tributed to this satisfactory result are Professor
Karl Hoffacker, M. Alfred Dunsky, of Berlin,
M. H. Pallenberg, M. Gabriel Seidl, M. Emanuel
Seidl, and M. Wolfel.

The German decorators have succeeded admir-
ably in the restaurant running under the Pavilion
Imperial and the adjoining "Exposition Viticole," "under the mistletoe" by r. tarn-ell

the principal artists concerned being Professors

Adolf Mannchen, of Dantzig, M. Albert Mannchen, tiorij for none wouid challenge the pre-eminence of
of Berlin, and M. Joseph Scherer, who has re- vour country in the sphere in which Germany here
produced in glass the designs of the Berlin painter, so greatly distinguishes herself.
M. Antzer.

After all I have said I come back to my first STUDIO-TALK,
idea, which is that the general scheme of the (From our own Correspondents.)

German exhibition cannot be too highly praised. T ONDON.—It is remarked, whenever a

itself as favourably as possible in the eyes of the humour of different nations, that England

•*—" takes the least pleasure in such
satirical drawings as are meant to give pain.
Indeed, there is seldom any unkindness in the
pictorial fun that is representatively English. This
applies even to political caricature, a form of
humorous expression that requires very delicate

handling. The venom
of the party spirit, for-
tunately, is never found
either in a Tenniel
cartoon, or in a political
drawing by Mr. F.
Carruthers Gould. A
little while ago, at the
Continental Gallery,
New Bond Street, Mr.
Gould exhibited more
than a hundred clever
drawings, and everybody

' the little nipper " by r. parnell who studied them must