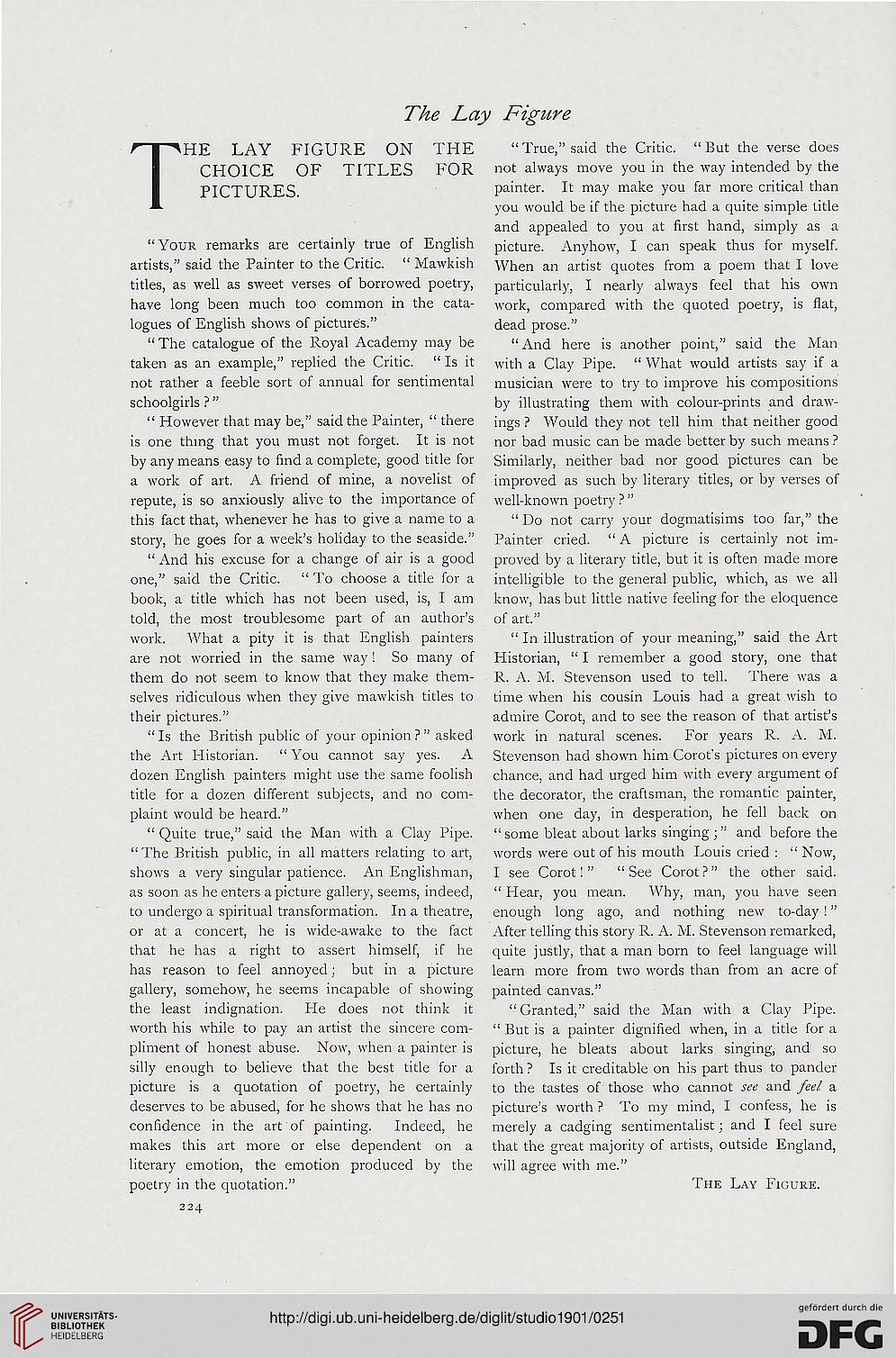 THE LAY FIGURE ON THE
CHOICE OF TITLES FOR
PICTURES.

"Your remarks are certainly true of English
artists," said the Painter to the Critic. " Mawkish
titles, as well as sweet verses of borrowed poetry,
have long been much too common in the cata-
logues of English shows of pictures."

" The catalogue of the Royal Academy may be
taken as an example," replied the Critic. " Is it
not rather a feeble sort of annual for sentimental
schoolgirls ? "

" However that may be," said the Painter, " there
is one thing that you must not forget. It is not
by any means easy to find a complete, good title for
a work of art. A friend of mine, a novelist of
repute, is so anxiously alive to the importance of
this fact that, whenever he has to give a name to a
story, he goes for a week's holiday to the seaside."

" And his excuse for a change of air is a good
one," said the Critic. " To choose a title for a
book, a title which has not been used, is, I am
told, the most troublesome part of an author's
work. What a pity it is that English painters
are not worried in the same way ! So many of
them do not seem to know that they make them-
selves ridiculous when they give mawkish titles to
their pictures."

" Is the British public of your opinion ? " asked
the Art Historian. " You cannot say yes. A
dozen English painters might use the same foolish
title for a dozen different subjects, and no com-
plaint would be heard."

" Quite true," said the Man with a Clay Pipe.
" The British public, in all matters relating to art,
shows a very singular patience. An Englishman,
as soon as he enters a picture gallery, seems, indeed,
to undergo a spiritual transformation. In a theatre,
or at a concert, he is wide-awake to the fact
that he has a right to assert himself, if he
has reason to feel annoyed; but in a picture
gallery, somehow, he seems incapable of showing
the least indignation. He does not think it
worth his while to pay an artist the sincere com-
pliment of honest abuse. Now, when a painter is
silly enough to believe that the best title for a
picture is a quotation of poetry, he certainly
deserves to be abused, for he shows that he has no
confidence in the art of painting. Indeed, he
makes this art more or else dependent on a
literary emotion, the emotion produced by the
poetry in the quotation."

"True," said the Critic. "But the verse does
not always move you in the way intended by the
painter. It may make you far more critical than
you would be if the picture had a quite simple title
and appealed to you at first hand, simply as a
picture. Anyhow, I can speak thus for myself.
When an artist quotes from a poem that I love
particularly, I nearly always feel that his own
work, compared with the quoted poetry, is flat,
dead prose."

"And here is another point," said the Man
with a Clay Pipe. " What would artists say if a
musician were to try to improve his compositions
by illustrating them with colour-prints and draw-
ings ? Would they not tell him that neither good
nor bad music can be made better by such means ?
Similarly, neither bad nor good pictures can be
improved as such by literary titles, or by verses of
well-known poetry ? "

" Do not carry your dogmatisims too far," the
Painter cried. " A picture is certainly not im-
proved by a literary title, but it is often made more
intelligible to the general public, which, as we all
know, has but little native feeling for the eloquence
of art."

" In illustration of your meaning," said the Art
Historian, " I remember a good story, one that
R. A. M. Stevenson used to tell. There was a
time when his cousin Louis had a great wish to
admire Corot, and to see the reason of that artist's
work in natural scenes. For years R. A. M.
Stevenson had shown him Corot's pictures on every
chance, and had urged him with every argument of
the decorator, the craftsman, the romantic painter,
when one day, in desperation, he fell back on
" some bleat about larks singing ; " and before the
words were out of his mouth Louis cried : " Now,
I see Corot! " " See Corot ?" the other said.
" Hear, you mean. Why, man, you have seen
enough long ago, and nothing new to-day !"
After telling this story R. A. M. Stevenson remarked,
quite justly, that a man born to feel language will
learn more from two words than from an acre of
painted canvas."

"Granted," said the Man with a Clay Pipe.
" But is a painter dignified when, in a title for a
picture, he bleats about larks singing, and so
forth ? Is it creditable on his part thus to pander
to the tastes of those who cannot see and feel a
picture's worth ? To my mind, I confess, he is
merely a cadging sentimentalist; and I feel sure
that the great majority of artists, outside England,
will agree with me."