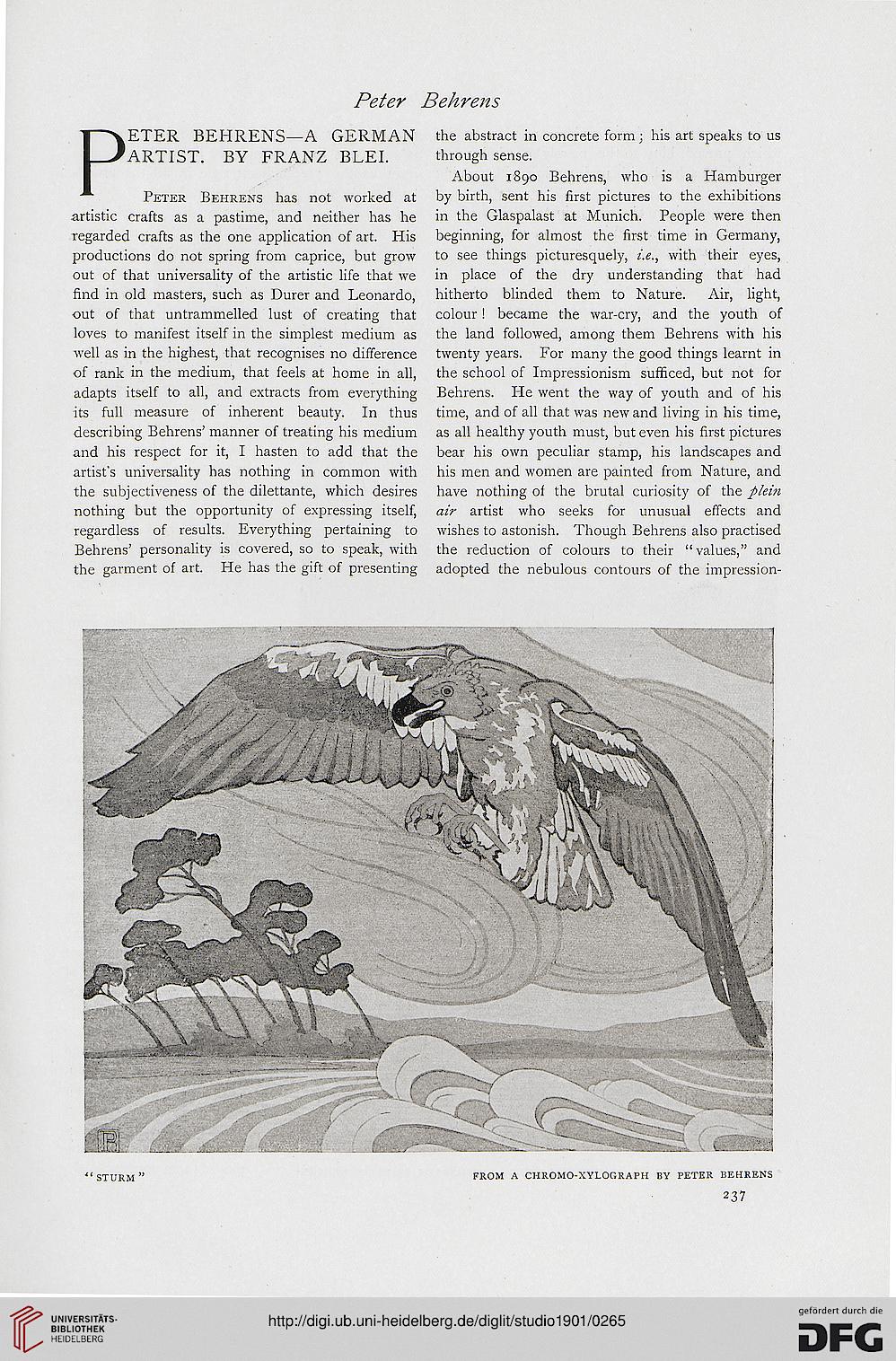 PETER BEHRENS—A GERMAN the abstract in concrete form; his art speaks to us

ARTIST. BY FRANZ BLEI. through sense.
About 1890 Behrens, who is a Hamburger

Peter Behrens has not worked at by birth, sent his first pictures to the exhibitions

artistic crafts as a pastime, and neither has he in the Glaspalast at Munich. People were then

regarded crafts as the one application of art. His beginning, for almost the first time in Germany,

productions do not spring from caprice, but grow to see things picturesquely, i.e., with their eyes,

find in old masters, such as Durer and Leonardo, hitherto blinded them to Nature. Air, light,

out of that untrammelled lust of creating that colour ! became the war-cry, and the youth of

loves to manifest itself in the simplest medium as the land followed, among them Behrens with his

well as in the highest, that recognises no difference twenty years. For many the good things learnt in

of rank in the medium, that feels at home in all, the school of Impressionism sufficed, but not for

adapts itself to all, and extracts from everything Behrens. He went the way of youth and of his

its full measure of inherent beauty. In thus time, and of all that was new and living in his time,

describing Behrens' manner of treating his medium as all healthy youth must, but even his first pictures

and his respect for it, I hasten to add that the bear his own peculiar stamp, his landscapes and

artist's universality has nothing in common with his men and women are painted from Nature, and

the subjectiveness of the dilettante, which desires have nothing of the brutal curiosity of the plein

nothing but the opportunity of expressing itself, air artist who seeks for unusual effects and

regardless of results. Everything pertaining to wishes to astonish. Though Behrens also practised

Behrens' personality is covered, so to speak, with the reduction of colours to their "values," and

the garment of art. He has the gift of presenting adopted the nebulous contours of the impression-

"STURM " FROM A CHROMO-XYLOC1RAPH BY PETER BEHRENS