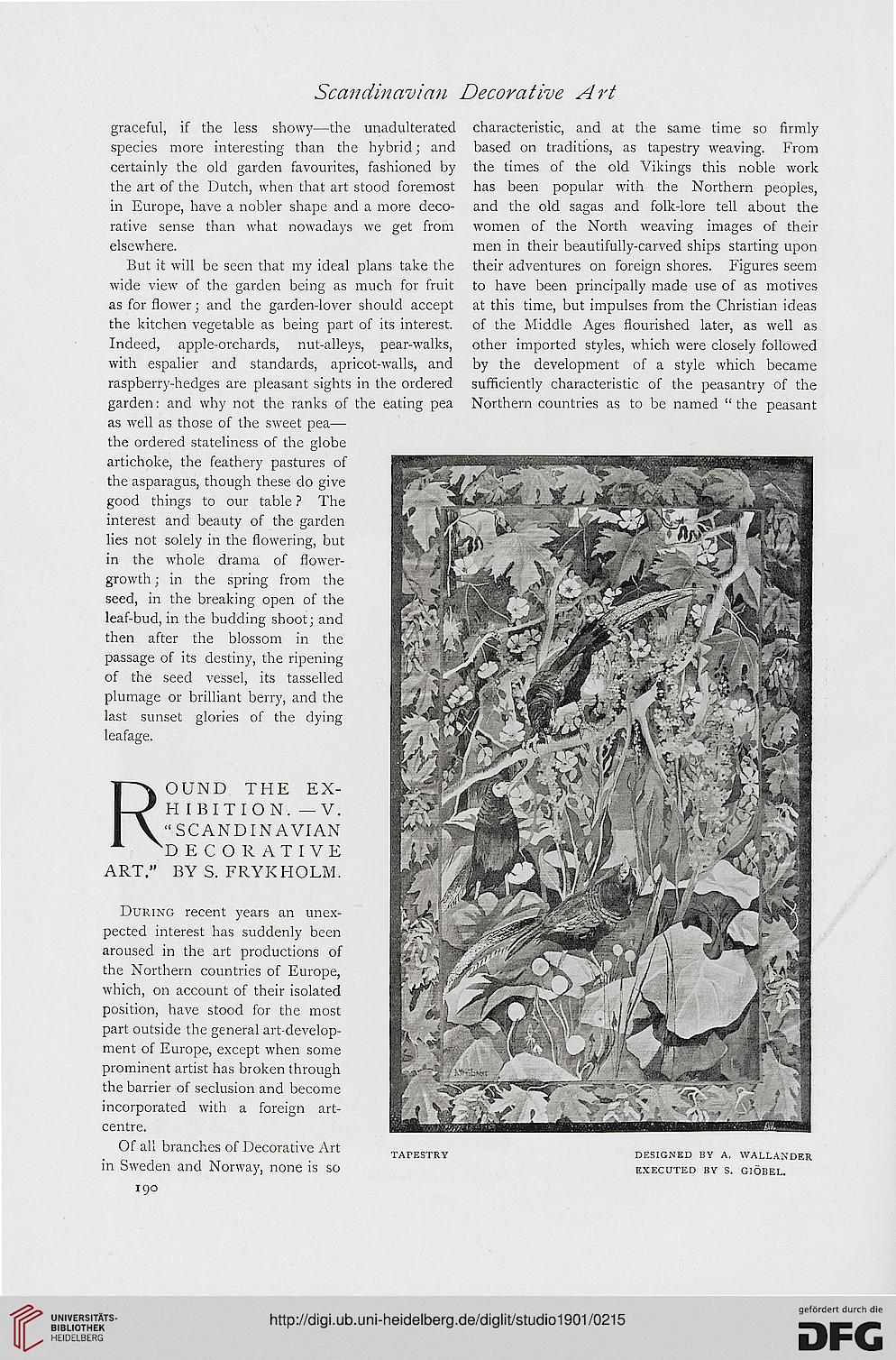 graceful, if the less showy—the unadulterated characteristic, and at the same time so firmly
species more interesting than the hybrid; and based on traditions, as tapestry weaving. From
certainly the old garden favourites, fashioned by the times of the old Vikings this noble work
the art of the Dutch, when that art stood foremost has been popular with the Northern peoples,
in Europe, have a nobler shape and a more deco- and the old sagas and folk-lore tell about the
rative sense than what nowadays we get from women of the North weaving images of their
elsewhere. men in their beautifully-carved ships starting upon

But it will be seen that my ideal plans take the their adventures on foreign shores. Figures seem
wide view of the garden being as much for fruit to have been principally made use of as motives
as for flower; and the garden-lover should accept at this time, but impulses from the Christian ideas
the kitchen vegetable as being part of its interest, of the Middle Ages flourished later, as well as
Indeed, apple-orchards, nut-alleys, pear-walks, other imported styles, which were closely followed
with espalier and standards, apricot-walls, and by the development of a style which became
raspberry-hedges are pleasant sights in the ordered sufficiently characteristic of the peasantry of the
garden: and why not the ranks of the eating pea Northern countries as to be named "the peasant
as well as those of the sweet pea—
the ordered stateliness of the globe
artichoke, the feathery pastures of
the asparagus, though these do give
good things to our table ? The
interest and beauty of the garden
lies not solely in the flowering, but
in the whole drama of flower-
growth ; in the spring from the
seed, in the breaking open of the
leaf-bud, in the budding shoot; and
then after the blossom in the
passage of its destiny, the ripening
of the seed vessel, its tasselled
plumage or brilliant berry, and the
last sunset glories of the dying
leafage.

During recent years an unex-
pected interest has suddenly been
aroused in the art productions of
the Northern countries of Europe,
which, on account of their isolated
position, have stood for the most
part outside the general art-develop-
ment of Europe, except when some
prominent artist has broken through
the barrier of seclusion and become
incorporated with a foreign art-
centre.

Of all branches of Decorative Art TArESTRY designed by a, wallander

in Sweden and Norway, none is so executed by s. giobel.