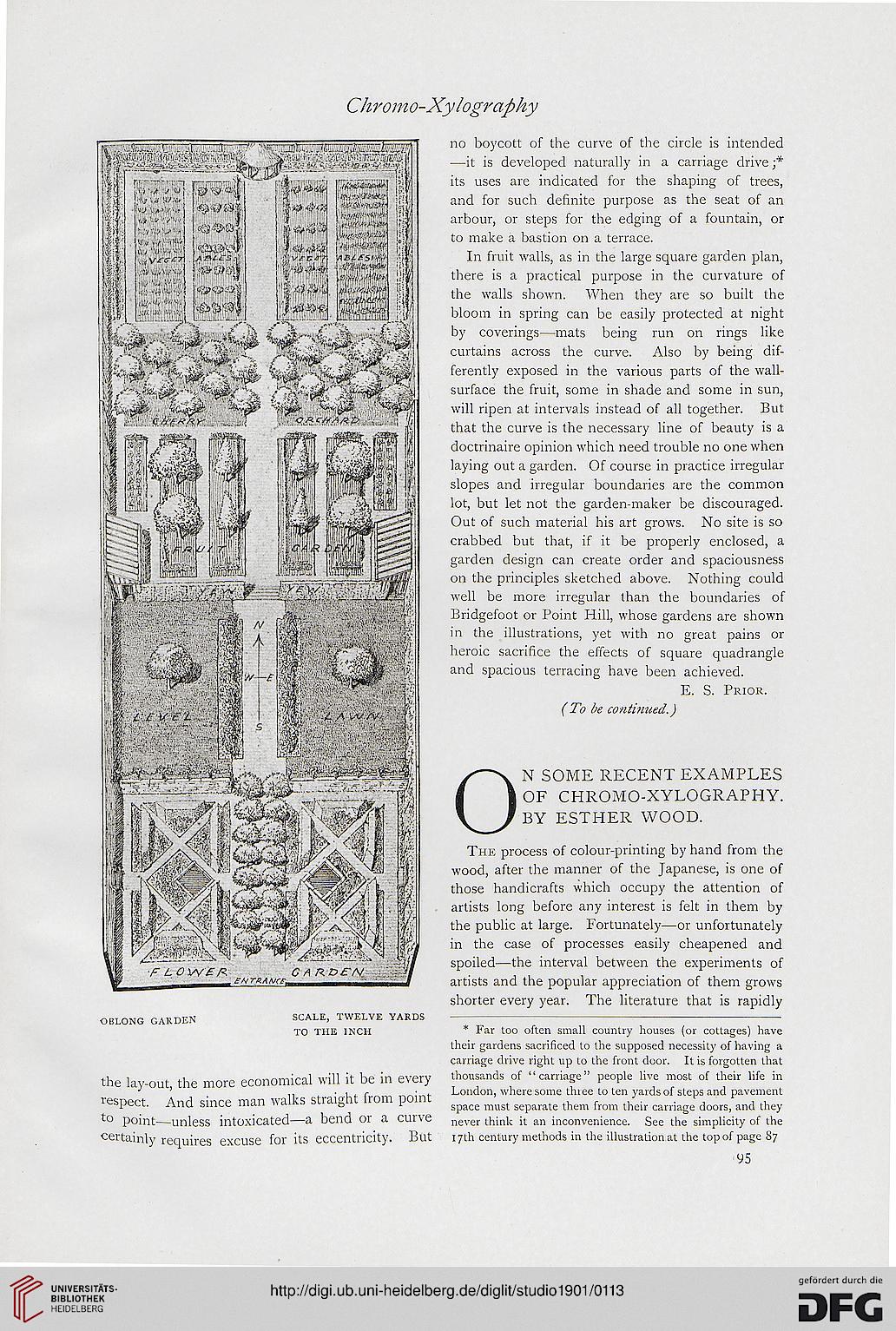 no boycott of the curve of the circle is intended
—it is developed naturally in a carriage drive;*
its uses are indicated for the shaping of trees,
and for such definite purpose as the seat of an
arbour, or steps for the edging of a fountain, or
to make a bastion on a terrace.

In fruit walls, as in the large square garden plan,
there is a practical purpose in the curvature of
the walls shown. When they are so built the
bloom in spring can be easily protected at night
by coverings—mats being run on rings like
curtains across the curve. Also by being dif-
ferently exposed in the various parts of the wall-
surface the fruit, some in shade and some in sun,
will ripen at intervals instead of all together. But
that the curve is the necessary line of beauty is a
doctrinaire opinion which need trouble no one when
laying out a garden. Of course in practice irregular
slopes and irregular boundaries are the common
lot, but let not the garden-maker be discouraged.
Out of such material his art grows. No site is so
crabbed but that, if it be properly enclosed, a
garden design can create order and spaciousness
on the principles sketched above. Nothing could
well be more irregular than the boundaries of
Bridgefoot or Point Hill, whose gardens are shown
in the illustrations, yet with no great pains or
heroic sacrifice the effects of square quadrangle
and spacious terracing have been achieved.

N SOME RECENT EXAMPLES
OF CHROMO-XYLOGRAPHY.
BY ESTHER WOOD.

The process of colour-printing by hand from the
wood, after the manner of the Japanese, is one of
those handicrafts which occupy the attention of
artists long before any interest is felt in them by
the public at large. Fortunately—or unfortunately
in the case of processes easily cheapened and
spoiled—the interval between the experiments of
artists and the popular appreciation of them grows
shorter every year. The literature that is rapidly

their gardens sacrificed to the supposed necessity of having a
carriage drive right up to the front door. It is forgotten that

the lav-OUt the more economical will it be in every thousands of "carriage" people live most of their life in
1 ' ■ , r ■ . London, where some three to ten yards of steps and pavement

to point—unless intoxicated—a bend or a curve never think it an inconvenience. See the simplicity of the
certainly requires excuse for its eccentricity. But 17th century methods in the illustration at the top of page 87