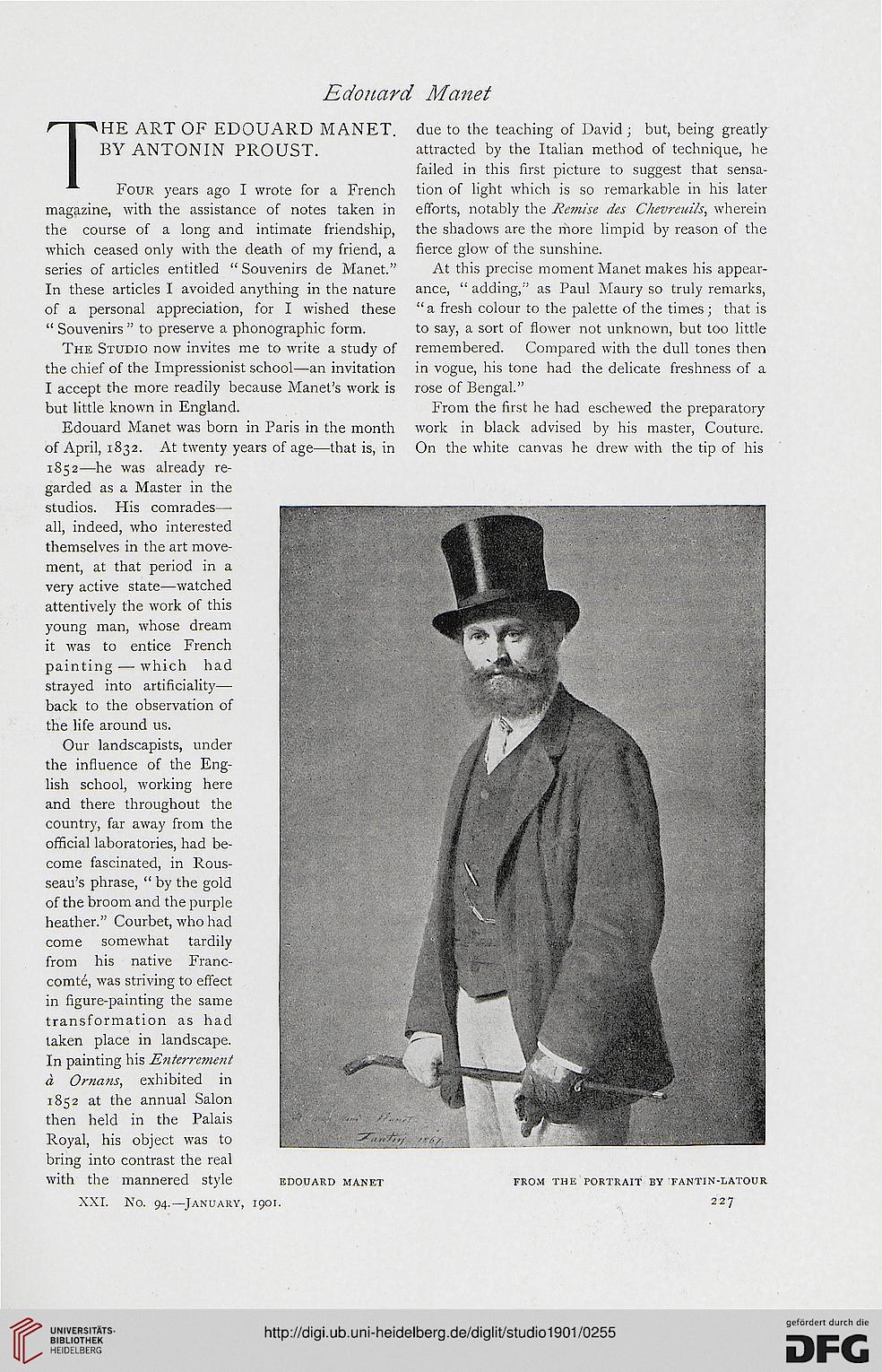 THE ART OF EDOUARD MANET, due to the teaching of David ; but, being greatly
BY ANTON IN PROUST. attracted by the Italian method of technique, he

failed in this first picture to suggest that sensa-
Four years ago I wrote for a French tion of light which is so remarkable in his later
magazine, with the assistance of notes taken in efforts, notably the Remise des Chevreuils, wherein
the course of a long and intimate friendship, the shadows are the more limpid by reason of the
which ceased only with the death of my friend, a fierce glow of the sunshine.

series of articles entitled " Souvenirs de Manet." At this precise moment Manet makes his appear-
In these articles I avoided anything in the nature ance, " adding/' as Paul Maury so truly remarks,
of a personal appreciation, for I wished these " a fresh colour to the palette of the times ; that is
" Souvenirs " to preserve a phonographic form. to say, a sort of flower not unknown, but too little

The Studio now invites me to write a study of remembered. Compared with the dull tones then
the chief of the Impressionist school—an invitation in vogue, his tone had the delicate freshness of a
I accept the more readily because Manet's work is rose of Bengal."

but little known in England. From the first he had eschewed the preparatory

Edouard Manet was born in Paris in the month work in black advised by his master, Couture.

of April, 1832. At twenty years of age—that is, in On the white canvas he drew with the tip of his

themselves in the art move-
ment, at that period in a

attentively the work of this

it was to entice French

back to the observation of

the life around us.

the influence of the Eng-
lish school, working here

and there throughout the

country, far away from the

official laboratories, had be-
come fascinated, in Rous-
seau's phrase, " by the gold

of the broom and the purple

heather." Courbet, who had

from his native Franc-

comte, was striving to effect

In painting his Enterrement

a Ornans, exhibited in

then held in the Palais

Royal, his object was to

bring into contrast the real