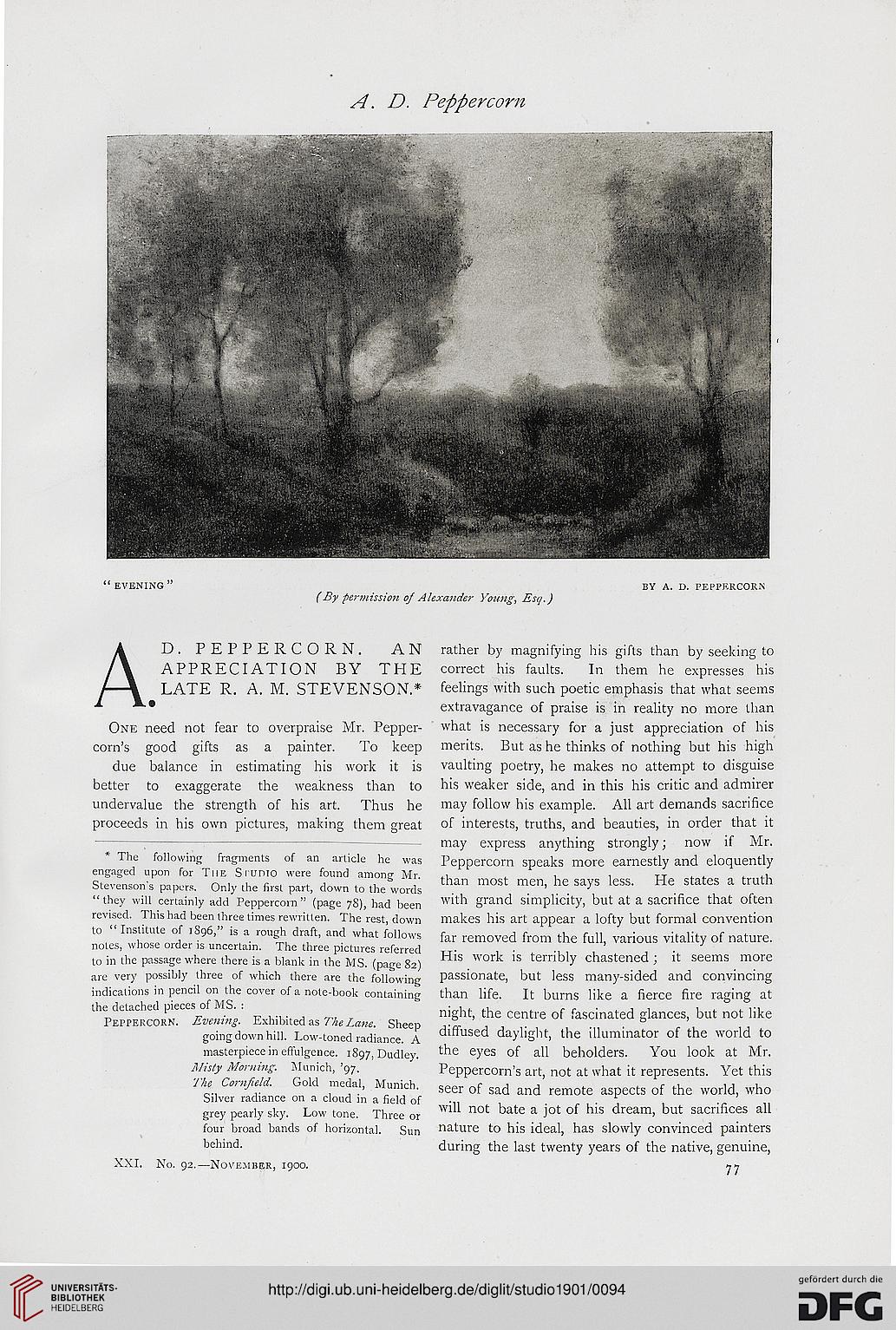 "evening" by a. d. peppercorn

(By permission of Alexander Young, Esq.)

AD. PEPPERCORN. AN rather by magnifying his gifts than by seeking to

APPRECIATION BY THE correct his faults. In them he expresses his

LATE R. A. M. STEVENSON.* feelings with such poetic emphasis that what seems

• extravagance of praise is in reality no more than

One need not fear to overpraise Mr. Pepper- what is necessary for a just appreciation of his

corn's good gifts as a painter. To keep merits. But as he thinks of nothing but his high

due balance in estimating his work it is vaulting poetry, he makes no attempt to disguise

better to exaggerate the weakness than to his weaker side, and in this his critic and admirer

undervalue the strength of his art. Thus he may follow his example. All art demands sacrifice

proceeds in his own pictures, making them great of interests, truths, and beauties, in order that it

may express anything strongly; now if Mr.

Stevenson s papers. Only the first part, down to the words

"they will certainly add Peppercorn" (page 78), had been with Srand simplicity, but at a sacrifice that often

revised. This had been three times rewritten. The rest, down makes his art appear a lofty but formal convention

to " Institute of 1896," is a rough draft, and what follows far removed from the full, various vitality of nature.

to in the passage where there is a blank in the MS. (page 82) HlS . WOrk 1S tembly chastened ; it seems ^ more

are very possibly three of which there are the following passionate, but less many-sided and convincing

indications in pencil on the cover of a note-book containing than life. It burns like a fierce fire raging at

the detached pieces of MS. = nigrit the centre f fagcinated glances, but not like

going down hill. Low-toned radiance. A dlffused daylight, the illuminator of the world to

masterpiece in effulgence. 1897, Dudley. 'he eyes of all beholders. You look at Mr.

Misty Morning. Munich, '97. Peppercorn's art, not at what it represents. Yet this

The Cornfield. Gold medal, Munich. seer of sad and remote aspects of the world, who

behind. during the last twenty years of the native, genuine,