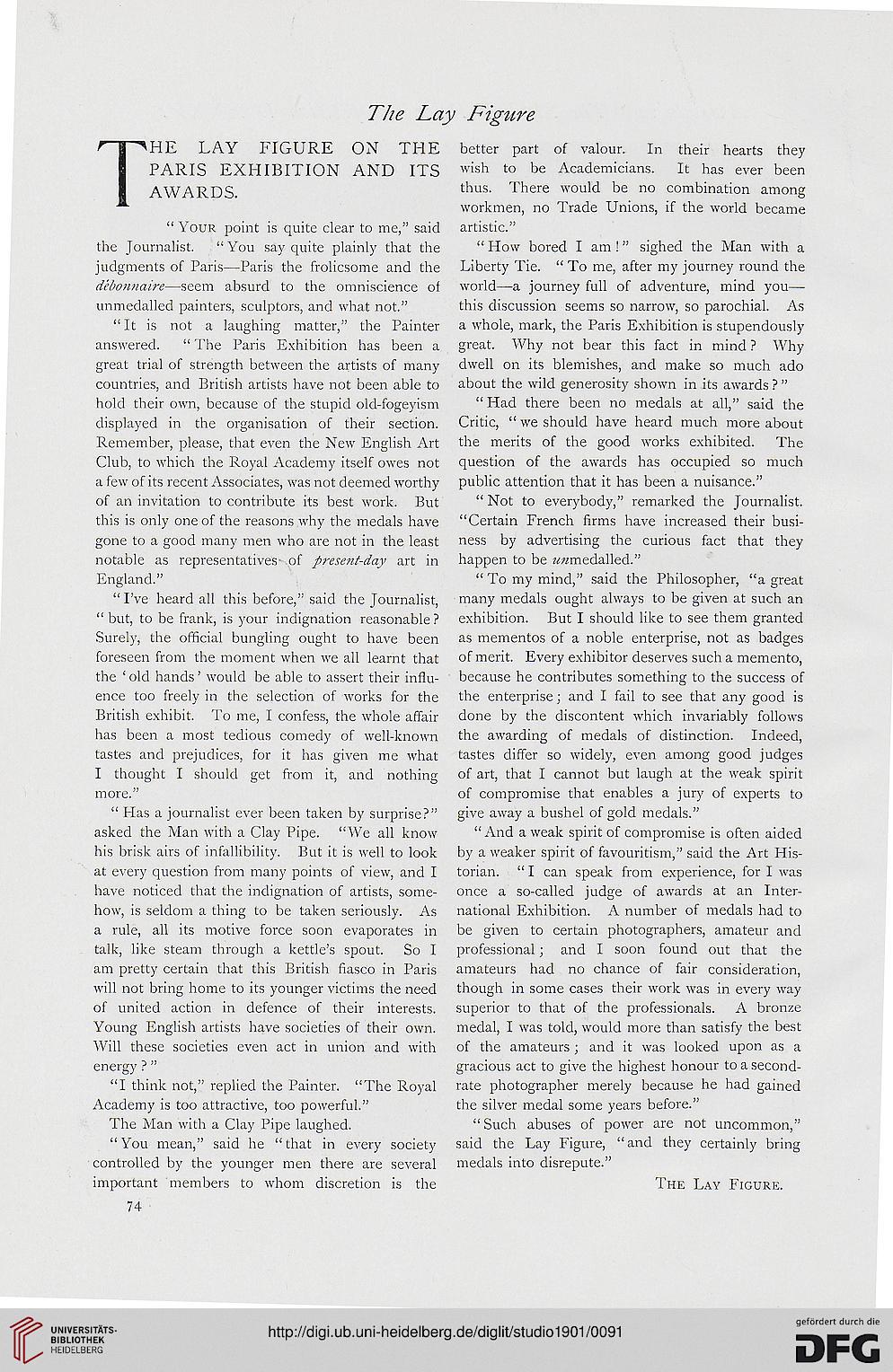 THE LAY FIGURE ON THE better part of valour. In their hearts they

PARIS EXHIBITION AND ITS wish to be Academicians. It has ever been

AWARDS thus. There would be no combination among
workmen, no Trade Unions, if the world became

" Your point is quite clear to me," said artistic."
the Journalist. " You say quite plainly that the " How bored I am!" sighed the Man with a

judgments of Paris—Paris the frolicsome and the Liberty Tie. " To me, after my journey round the

debonnaire—seem absurd to the omniscience of world—a journey full of adventure, mind you—

unmedalled painters, sculptors, and what not." this discussion seems so narrow, so parochial. As

"It is not a laughing matter," the Painter a whole, mark, the Paris Exhibition is stupendously

answered. " The Paris Exhibition has been a great. Why not bear this fact in mind ? Why

great trial of strength between the artists of many dwell on its blemishes, and make so much ado

countries, and British artists have not been able to about the wild generosity shown in its awards ? "
hold their own, because of the stupid old-fogeyism "Had there been no medals at all," said the

displayed in the organisation of their section. Critic, " we should have heard much more about

Remember, please, that even the New English Art the merits of the good works exhibited. The

Club, to which the Royal Academy itself owes not question of the awards has occupied so much

a few of its recent Associates, was not deemed worthy public attention that it has been a nuisance."
of an invitation to contribute its best work. But " Not to everybody," remarked the Journalist,

notable as representatives of present-day art in happen to be z^miedalled."

England." "To my mind," said the Philosopher, "a great

" I've heard all this before," said the Journalist, many medals ought always to be given at such an

" but, to be frank, is your indignation reasonable ? exhibition. But I should like to see them granted

Surely, the official bungling ought to have been as mementos of a noble enterprise, not as badges

foreseen from the moment when we all learnt that of merit. Every exhibitor deserves such a memento,

ence too freely in the selection of works for the the enterprise; and I fail to see that any good is

British exhibit. To me, I confess, the whole affair done by the discontent which invariably follows

has been a most tedious comedy of well-known the awarding of medals of distinction. Indeed,

tastes and prejudices, for it has given me what tastes differ so widely, even among good judges

I thought I should get from it, and nothing of art, that I cannot but laugh at the weak spirit

more." of compromise that enables a jury of experts to

" Has a journalist ever been taken by surprise?" give away a bushel of gold medals."
asked the Man with a Clay Pipe. "We all know "And a weak spirit of compromise is often aided
his brisk airs of infallibility. But it is well to look by a weaker spirit of favouritism," said the Art His-
at every question from many points of view, and I torian. "I can speak from experience, for I was
have noticed that the indignation of artists, some- once a so-called judge of awards at an Inter-
how, is seldom a thing to be taken seriously. As national Exhibition. A number of medals had to
a rule, all its motive force soon evaporates in be given to certain photographers, amateur and
talk, like steam through a kettle's spout. So I professional ; and I soon found out that the
am pretty certain that this British fiasco in Paris amateurs had no chance of fair consideration,
will not bring home to its younger victims the need though in some cases their work was in every way
of united action in defence of their interests, superior to that of the professionals. A bronze
Young English artists have societies of their own. medal, I was told, would more than satisfy the best
Will these societies even act in union and with of the amateurs ; and it was looked upon as a
energy ? " gracious act to give the highest honour to a second-
"I think not," replied the Painter. "The Royal rate photographer merely because he had gained
Academy is too attractive, too powerful." the silver medal some years before."

The Man with a Clay Pipe laughed. "Such abuses of power are not uncommon,"

"You mean," said he "that in every society said the Lay Figure, "and they certainly bring

controlled by the younger men there are several medals into disrepute."

important members to whom discretion is the The Lay Figure.