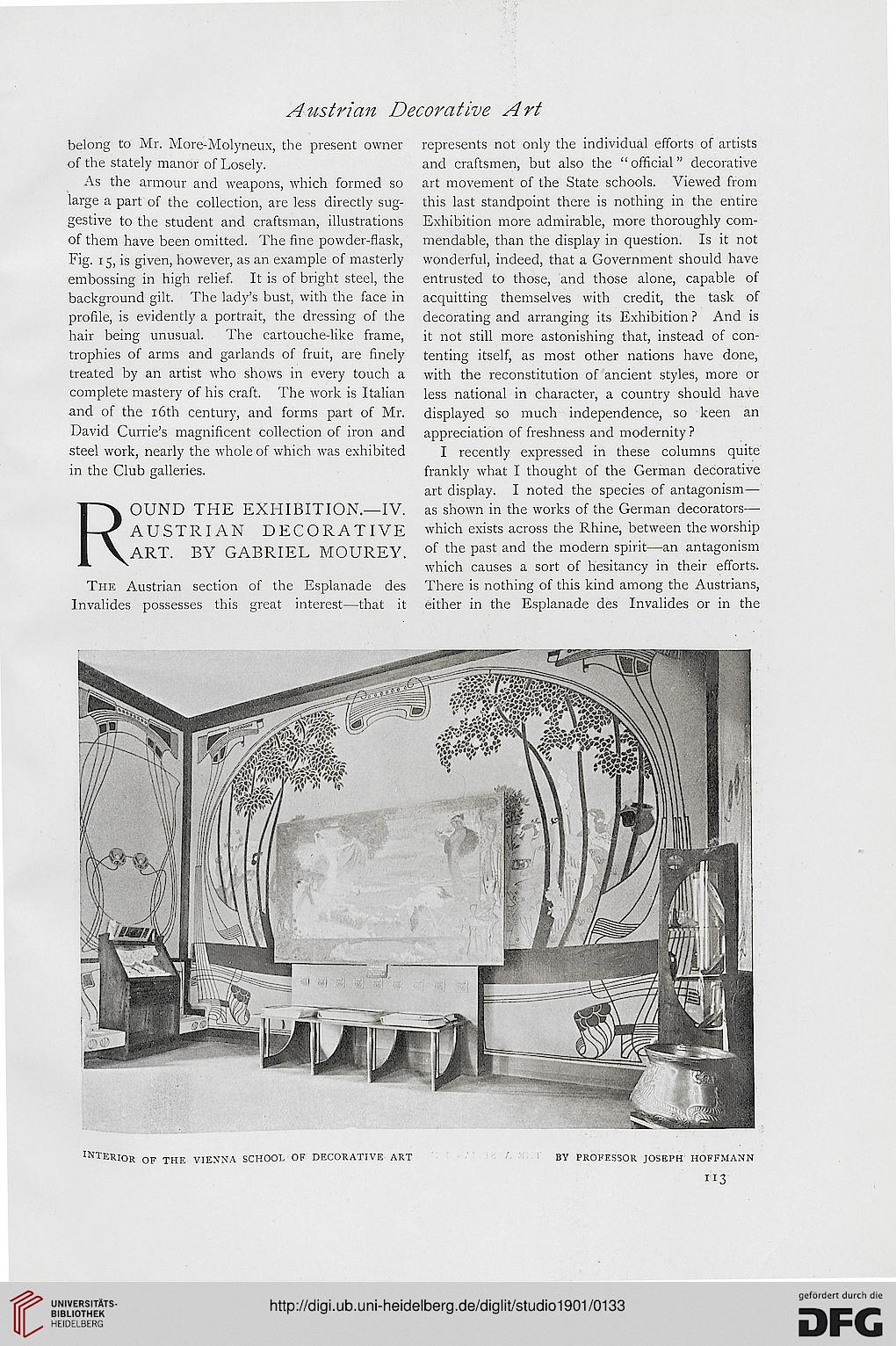 belong to Mr. More-Molyneux, the present owner
of the stately manor of Losely.

As the armour and weapons, which formed so
large a part of the collection, are less directly sug-
gestive to the student and craftsman, illustrations
of them have been omitted. The fine powder-flask,
Fig. 15, is given, however, as an example of masterly
embossing in high relief. It is of bright steel, the
background gilt. The lady's bust, with the face in
profile, is evidently a portrait, the dressing of the
hair being unusual. The cartouche-like frame,
trophies of arms and garlands of fruit, are finely
treated by an artist who shows in every touch a
complete mastery of his craft. The work is Italian
and of the 16th century, and forms part of Mr.
David Currie's magnificent collection of iron and
steel work, nearly the whole of which was exhibited
in the Club galleries.

ROUND THE EXHIBITION.—IV.
AUSTRIAN DECORATIVE
ART. BY GABRIEL MOUREY.

represents not only the individual efforts of artists
and craftsmen, but also the " official" decorative
art movement of the State schools. Viewed from
this last standpoint there is nothing in the entire
Exhibition more admirable, more thoroughly com-
mendable, than the display in question. Is it not
wonderful, indeed, that a Government should have
entrusted to those, and those alone, capable of
acquitting themselves with credit, the task of
decorating and arranging its Exhibition ? And is
it not still more astonishing that, instead of con-
tenting itself, as most other nations have done,
with the reconstitution of ancient styles, more or
less national in character, a country should have
displayed so much independence, so keen an
appreciation of freshness and modernity ?

I recently expressed in these columns quite
frankly what I thought of the German decorative
art display. I noted the species of antagonism—
as shown in the works of the German decorators—
which exists across the Rhine, between the worship
of the past and the modern spirit—an antagonism
which causes a sort of hesitancy in their efforts.
There is nothing of this kind among the Austrians,
either in the Esplanade des Invalides or in the

INTERIOR OF THE VIENNA SCHOOL OF DECORATIVE ART