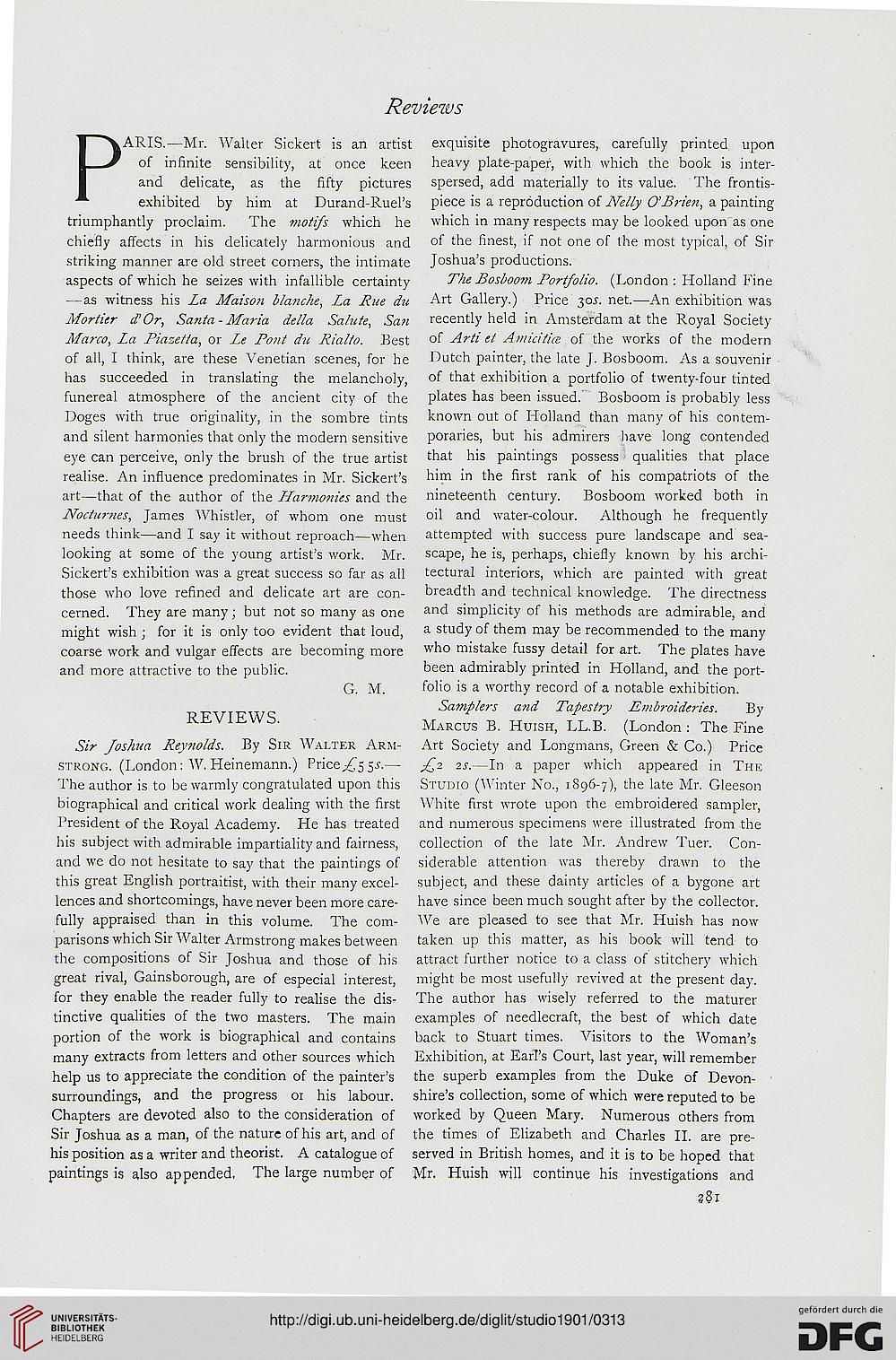 PARIS.—Mr. Walter Sickert is an artist
of infinite sensibility, at once keen
and delicate, as the fifty pictures
exhibited by him at Durand-Ruel's
triumphantly proclaim. The motifs which he
chiefly affects in his delicately harmonious and
striking manner are old street corners, the intimate
aspects of which he seizes with infallible certainty
—as witness his La Maison blanche, La Rue du
Mortier d'Or, Santa-Maria della Salute, San
Marco, La Piazetla, or Le Pont du Rialto. Best
of all, I think, are these Venetian scenes, for he
has succeeded in translating the melancholy,
funereal atmosphere of the ancient city of the
Doges with true originality, in the sombre tints
and silent harmonies that only the modern sensitive
eye can perceive, only the brush of the true artist
realise. An influence predominates in Mr. Sickert's
art—that of the author of the Llarmonies and the
Nocturnes, James Whistler, of whom one must
needs think—and I say it without reproach—when
looking at some of the young artist's work. Mr.
Sickert's exhibition was a great success so far as all
those who love refined and delicate art are con-
cerned. They are many; but not so many as one
might wish ; for it is only too evident that loud,
coarse work and vulgar effects are becoming more
and more attractive to the public.

Sir Joshua Reynolds. By Sir Walter Arm-
strong. (London: W. Heinemann.) Price5s —
The author is to be warmly congratulated upon this
biographical and critical work dealing with the first
President of the Royal Academy. He has treated
his subject with admirable impartiality and fairness,
and we do not hesitate to say that the paintings of
this great English portraitist, with their many excel-
lences and shortcomings, have never been more care-
fully appraised than in this volume. The com-
parisons which Sir Walter Armstrong makes between
the compositions of Sir Joshua and those of his
great rival, Gainsborough, are of especial interest,
for they enable the reader fully to realise the dis-
tinctive qualities of the two masters. The main
portion of the work is biographical and contains
many extracts from letters and other sources which
help us to appreciate the condition of the painter's
surroundings, and the progress 01 his labour.
Chapters are devoted also to the consideration of
Sir Joshua as a man, of the nature of his art, and of
his position as a writer and theorist. A catalogue of
paintings is also appended, The large number of

exquisite photogravures, carefully printed upon
heavy plate-paper, with which the book is inter-
spersed, add materially to its value. The frontis-
piece is a reproduction of Nelly O'Brien, a painting
which in many respects may be looked upon as one
of the finest, if not one of the most typical, of Sir
Joshua's productions.

The Bosboom Portfolio. (London : Holland Fine
Art Gallery.) Price 30.?. net.—An exhibition was
recently held in Amsterdam at the Royal Society
of Arti et Amicitice of the works of the modern
Dutch painter, the late J. Bosboom. As a souvenir
of that exhibition a portfolio of twenty-four tinted
plates has been issued. Bosboom is probably less
known out of Holland than many of his contem-
poraries, but his admirers have long contended
that his paintings possess qualities that place
him in the first rank of his compatriots of the
nineteenth century. Bosboom worked both in
oil and water-colour. Although he frequently
attempted with success pure landscape and sea-
scape, he is, perhaps, chiefly known by his archi-
tectural interiors, which are painted with great
breadth and technical knowledge. The directness
and simplicity of his methods are admirable, and
a study of them may be recommended to the many
who mistake fussy detail for art. The plates have
been admirably printed in Holland, and the port-
folio is a worthy record of a notable exhibition.

Samplers and Tapestry Embroideries. By
Marcus B. Huish, LL.B. (London : The Fine
Art Society and Longmans, Green & Co.) Price
£2 2S.—In a paper which appeared in The
Studio (Winter No., 1896-7), the late Mr. Gleeson
White first wrote upon the embroidered sampler,
and numerous specimens were illustrated from the
collection of the late Mr. Andrew Tuer. Con-
siderable attention was thereby drawn to the
subject, and these dainty articles of a bygone art
have since been much sought after by the collector.
We are pleased to see that Mr. Huish has now
taken up this matter, as his book will tend to
attract further notice to a class of stitchery which
might be most usefully revived at the present day.
The author has wisely referred to the maturer
examples of needlecraft, the best of which date
back to Stuart times. Visitors to the Woman's
Exhibition, at Earl's Court, last year, will remember
the superb examples from the Duke of Devon-
shire's collection, some of which were reputed to be
worked by Queen Mary. Numerous others from
the times of Elizabeth and Charles II. are pre-
served in British homes, and it is to be hoped that
Mr. Huish will continue his investigations and