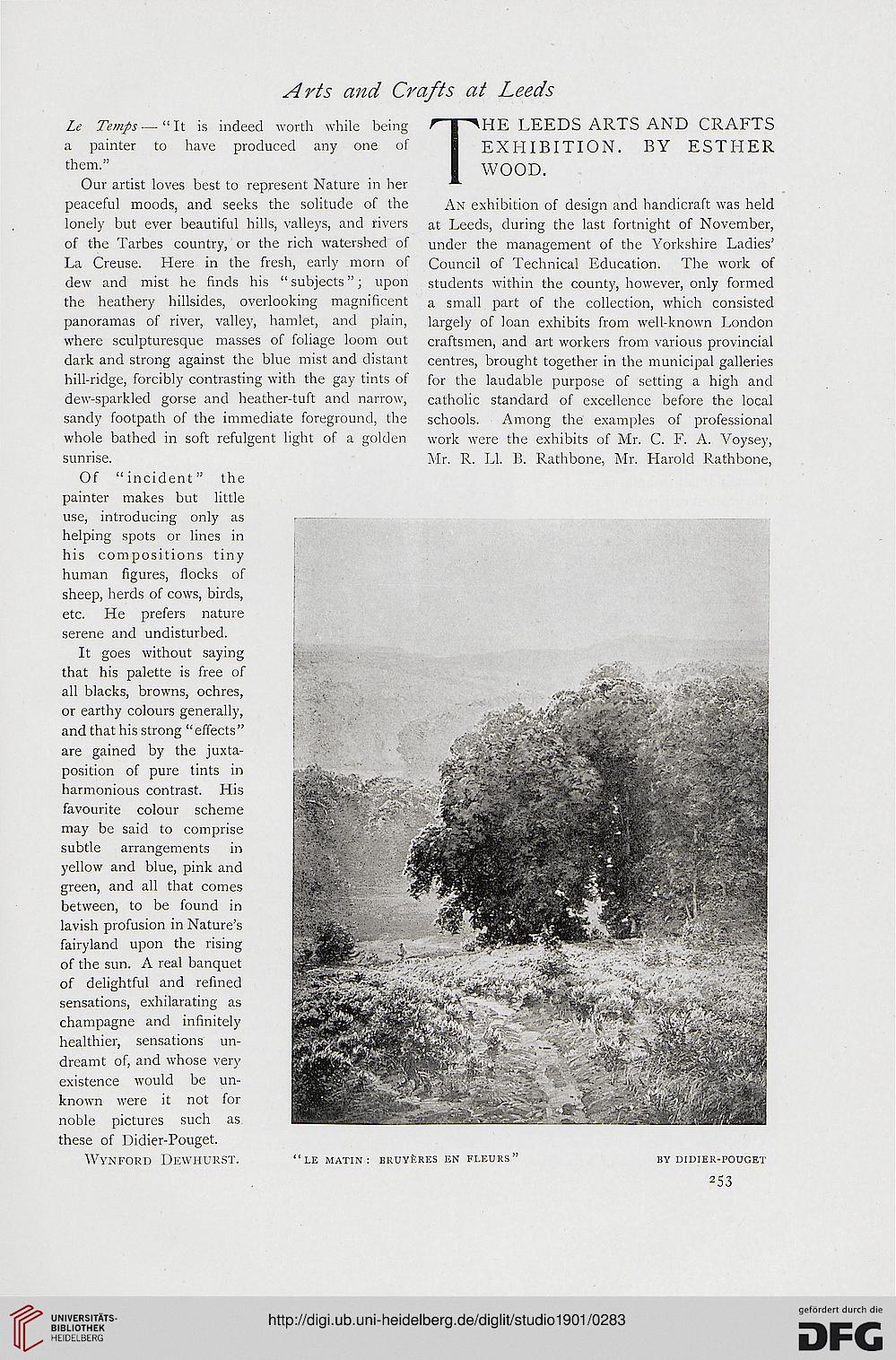 Information about OCR text
Arts and Crafts at Leeds

Le Temps— "It is indeed worth while being rpHE LEEDS ARTS AND CRAFTS
a painter to have produced any one of I EXHIBITION. BY ESTHER

Our artist loves best to represent Nature in her
peaceful moods, and seeks the solitude of the An exhibition of design and handicraft was held
lonely but ever beautiful hills, valleys, and rivers at Leeds, during the last fortnight of November,
of the Tarbes country, or the rich watershed of under the management of the Yorkshire Ladies'
La Creuse. Here in the fresh, early morn of Council of Technical Education. The work of
dew and mist he finds his "subjects"; upon students within the county, however, only formed
the heathery hillsides, overlooking magnificent a small part of the collection, which consisted
panoramas of river, valley, hamlet, and plain, largely of loan exhibits from well-known London
where sculpturesque masses of foliage loom out craftsmen, and art workers from various provincial
dark and strong against the blue mist and distant centres, brought together in the municipal galleries
hill-ridge, forcibly contrasting with the gay tints of for the laudable purpose of setting a high and
dew-sparkled gorse and heather-tuft and narrow, catholic standard of excellence before the local
sandy footpath of the immediate foreground, the schools. Among the examples of professional
whole bathed in soft refulgent light of a golden work were the exhibits of Mr. C. F. A. Voysey,
sunrise. Mr. R. LI. B. Rathbone, Mr. Harold Rathbone,

Of "incident" the
painter makes but little
use, introducing only as BHHEHSsK
helping spots or lines in
his compositions tiny
human figures, flocks of
sheep, herds of cows, birds,
etc. He prefers nature
serene and undisturbed. j

It goes without saying
that his palette is free of

or earthy colours generally,
and that his strong "effects"
are gained by the juxta-
position of pure tints in
harmonious contrast. His
favourite colour scheme
may be said to comprise
subtle arrangements in
yellow and blue, pink and
green, and all that comes
between, to be found in
lavish profusion in Nature's
fairyland upon the rising
of the sun. A real banquet
of delightful and refined
sensations, exhilarating as
champagne and infinitely
healthier, sensations un-
dreamt of, and whose very
existence would be un-
known were it not for
noble pictures such as
these of Didier-Pouget.