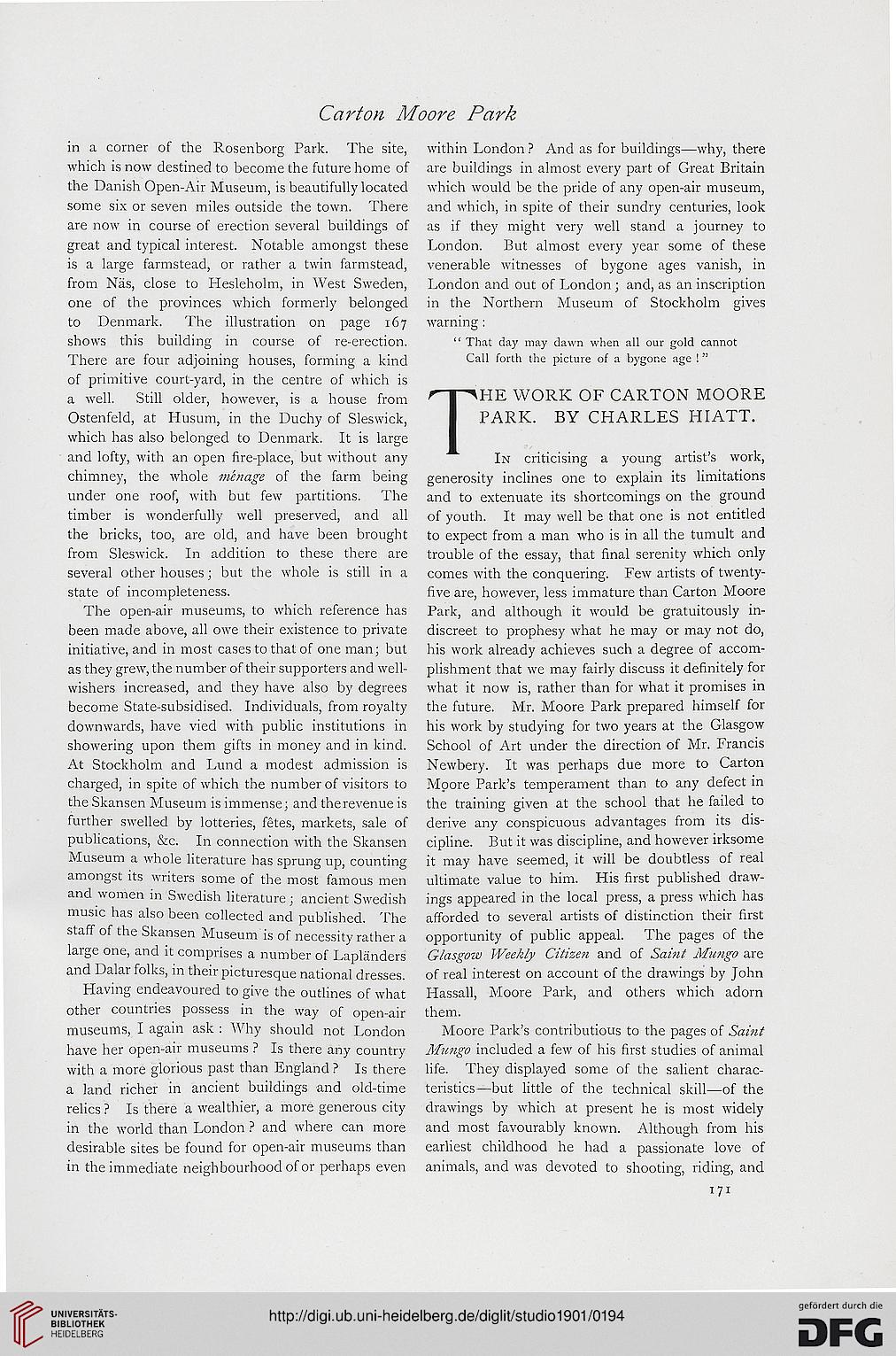 in a corner of the Rosenborg Park. The site,
which is now destined to become the future home of
the Danish Open-Air Museum, is beautifully located
some six or seven miles outside the town. There
are now in course of erection several buildings of
great and typical interest. Notable amongst these
is a large farmstead, or rather a twin farmstead,
from Nas, close to Hesleholm, in West Sweden,
one of the provinces which formerly belonged
to Denmark. The illustration on page 167
shows this building in course of re-erection.
There are four adjoining houses, forming a kind
of primitive court-yard, in the centre of which is
a well. Still older, however, is a house from
Ostenfeld, at Husum, in the Duchy of Sleswick,
which has also belonged to Denmark. It is large
and lofty, with an open fire-place, but without any
chimney, the whole menage of the farm being
under one roof, with but few partitions. The
timber is wonderfully well preserved, and all
the bricks, too, are old, and have been brought
from Sleswick. In addition to these there are
several other houses; but the whole is still in a
state of incompleteness.

The open-air museums, to which reference has
been made above, all owe their existence to private
initiative, and in most cases to that of one man; but
as they grew, the number of their supporters and well-
wishers increased, and they have also by degrees
become State-subsidised. Individuals, from royalty
downwards, have vied with public institutions in
showering upon them gifts in money and in kind.
At Stockholm and Lund a modest admission is
charged, in spite of which the number of visitors to
the Skansen Museum is immense; and the revenue is
further swelled by lotteries, fetes, markets, sale of
publications, &c. In connection with the Skansen
Museum a whole literature has sprung up, counting
amongst its writers some of the most famous men
and women in Swedish literature; ancient Swedish
music has also been collected and published. The
staff of the Skansen Museum is of necessity rather a
large one, and it comprises a number of Laplanders
and Dalar folks, in their picturesque national dresses.

Having endeavoured to give the outlines of what
other countries possess in the way of open-air
museums, I again ask : Why should not London
have her open-air museums ? Is there any country
with a more glorious past than England ? Is there
a land richer in ancient buildings and old-time
relics ? Is there a wealthier, a more generous city
in the world than London ? and where can more
desirable sites be found for open-air museums than
in the immediate neighbourhood of or perhaps even

within London ? And as for buildings—why, there
are buildings in almost every part of Great Britain
which would be the pride of any open-air museum,
and which, in spite of their sundry centuries, look
as if they might very well stand a journey to
London. But almost every year some of these
venerable witnesses of bygone ages vanish, in
London and out of London ; and, as an inscription
in the Northern Museum of Stockholm gives
warning :

" That day may dawn when all our gold cannot
Call forth the picture of a bygone age ! "

THE WORK OF CARTON MOORE
PARK. BY CHARLES HIATT.

In criticising a young artist's work,
generosity inclines one to explain its limitations
and to extenuate its shortcomings on the ground
of youth. It may well be that one is not entitled
to expect from a man who is in all the tumult and
trouble of the essay, that final serenity which only
comes with the conquering. Few artists of twenty-
five are, however, less immature than Carton Moore
Park, and although it would be gratuitously in-
discreet to prophesy what he may or may not do,
his work already achieves such a degree of accom-
plishment that we may fairly discuss it definitely for
what it now is, rather than for what it promises in
the future. Mr. Moore Park prepared himself for
his work by studying for two years at the Glasgow
School of Art under the direction of Mr. Francis
Newbery. It was perhaps due more to Carton
Moore Park's temperament than to any defect in
the training given at the school that he failed to
derive any conspicuous advantages from its dis-
cipline. But it was discipline, and however irksome
it may have seemed, it will be doubtless of real
ultimate value to him. His first published draw-
ings appeared in the local press, a press which has
afforded to several artists of distinction their first
opportunity of public appeal. The pages of the
Glasgow Weekly Cilizen and of Saint Mungo are
of real interest on account of the drawings by John
Hassall, Moore Park, and others which adorn
them.

Moore Park's contributious to the pages of Saint
Mungo included a few of his first studies of animal
life. They displayed some of the salient charac-
teristics—but little of the technical skill—of the
drawings by which at present he is most widely
and most favourably known. Although from his
earliest childhood he had a passionate love of
animals, and was devoted to shooting, riding, and