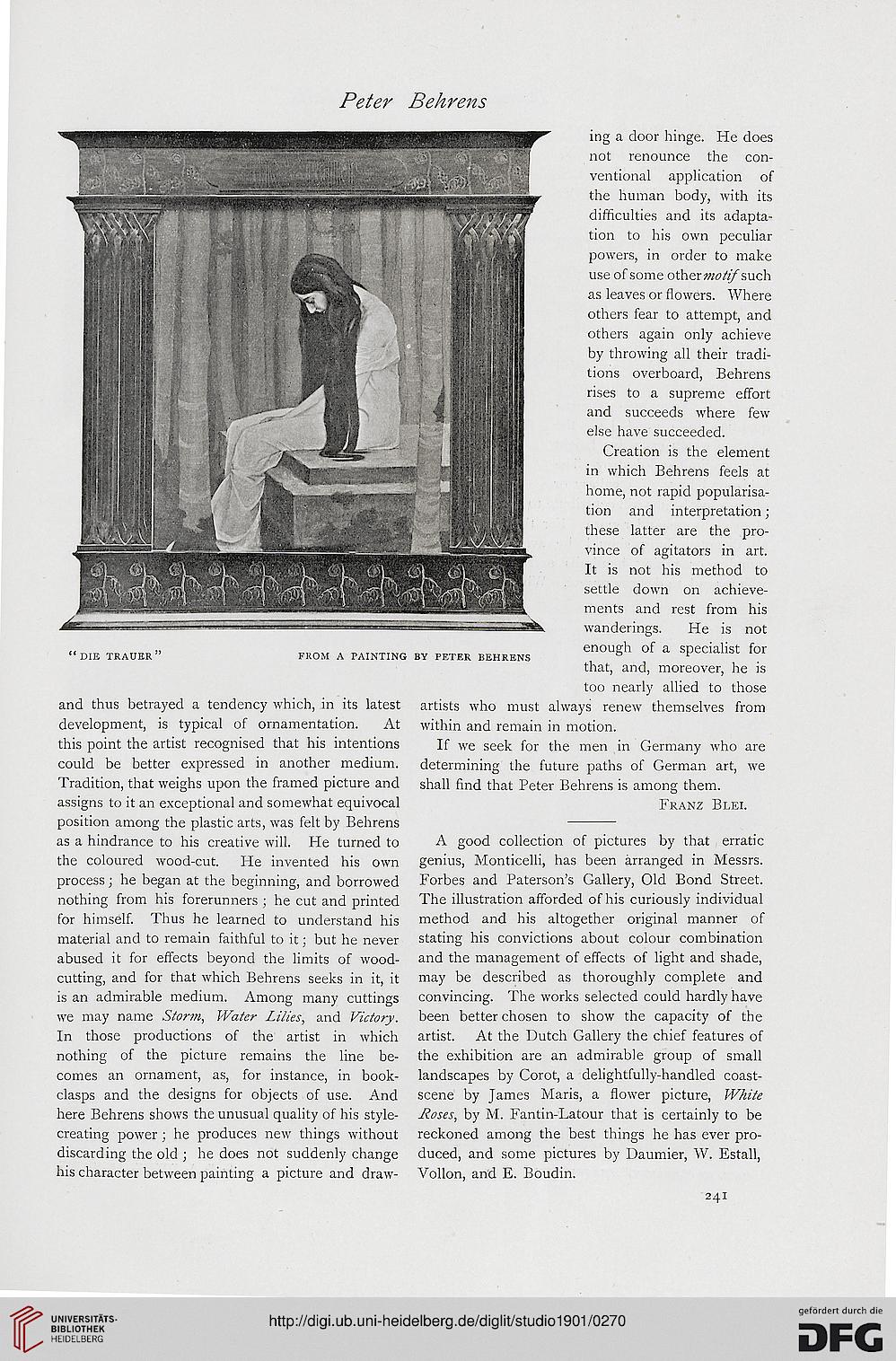 DIE TRAUER FROM A PAINTING BY PETER BEHRENS

ing a door hinge. He does
not renounce the con-
ventional application of
the human body, with its
difficulties and its adapta-
tion to his own peculiar
powers, in order to make
use of some other motif such
as leaves or flowers. Where
others fear to attempt, and
others again only achieve
by throwing all their tradi-
tions overboard, Behrens
rises to a supreme effort
and succeeds where few
else have succeeded.

Creation is the element
in which Behrens feels at
home, not rapid popularisa-
tion and interpretation;
these latter are the pro-
vince of agitators in art.
It is not his method to
settle down on achieve-
ments and rest from his
wanderings. He is not
enough of a specialist for
that, and, moreover, he is
too nearly allied to those

and thus betrayed a tendency which, in its latest artists who must always renew themselves from
development, is typical of ornamentation. At within and remain in motion.

this point the artist recognised that his intentions If we seek for the men in Germany who are
could be better expressed in another medium. determining the future paths of German art, we
Tradition, that weighs upon the framed picture and shall find that Peter Behrens is among them,
assigns to it an exceptional and somewhat equivocal Franz Blei.

position among the plastic arts, was felt by Behrens -

as a hindrance to his creative will. He turned to A good collection of pictures by that erratic
the coloured wood-cut. He invented his own genius, Monticelli, has been arranged in Messrs.
process; he began at the beginning, and borrowed Forbes and Paterson's Gallery, Old Bond Street,
nothing from his forerunners ; he cut and printed The illustration afforded of his curiously individual
for himself. Thus he learned to understand his method and his altogether original manner of
material and to remain faithful to it; but he never stating his convictions about colour combination
abused it for effects beyond the limits of wood- and the management of effects of light and shade,
cutting, and for that which Behrens seeks in it, it may be described as thoroughly complete and
is an admirable medium. Among many cuttings convincing. The works selected could hardly have
we may name Storm, Water Lilies, and Victory, been better chosen to show the capacity of the
In those productions of the artist in which artist. At the Dutch Gallery the chief features of
nothing of the picture remains the line be- the exhibition are an admirable group of small
comes an ornament, as, for instance, in book- landscapes by Corot, a delightfully-handled coast-
clasps and the designs for objects of use. And scene by James Maris, a flower picture, White
here Behrens shows the unusual quality of his style- Roses, by M. Fantin-Latour that is certainly to be
creating power ; he produces new things without reckoned among the best things he has ever pro-
discarding the old ; he does not suddenly change duced, and some pictures by Daumier, W. Estall,
his character between painting a picture and draw- Vollon, and E. Boudin.