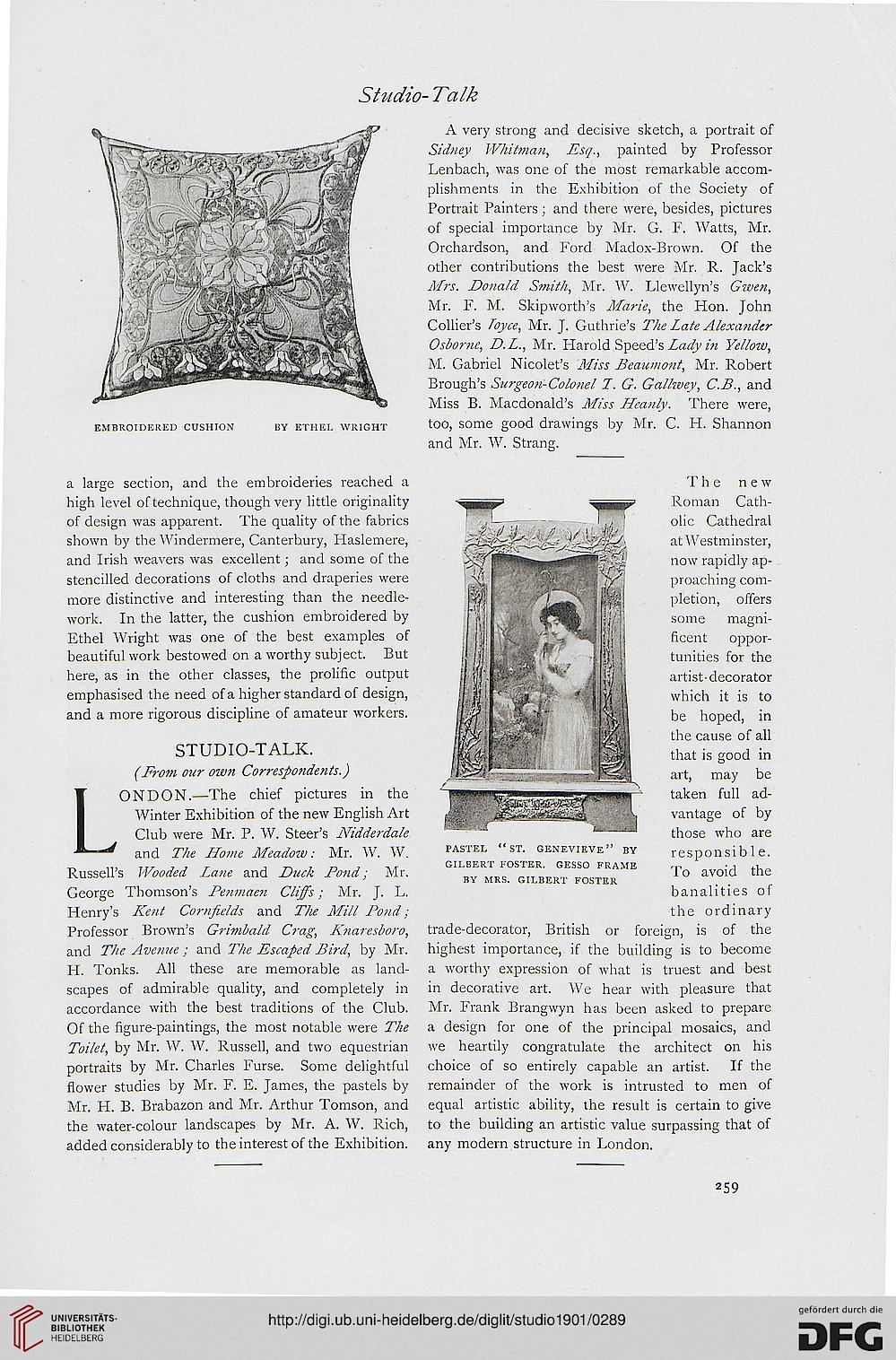 A very strong and decisive sketch, a portrait of
Sidney Whitman, Esq., painted by Professor
Lenbach, was one of the most remarkable accom-
plishments in the Exhibition of the Society of
Portrait Painters; and there were, besides, pictures
of special importance by Mr. G. F, Watts, Mr.
Orchardson, and Ford Madox-Brown. Of the
other contributions the best were Mr. R. Jack's
Mrs. Donald Smith, Mr. W. Llewellyn's Given,
Mr. F. M. Skipworth's Marie, the Hon. John
Collier's Toyce, Mr. J. Guthrie's The Late Alexander
Osborne, D.L., Mr. Harold Speed's Lady in Yellow,
M. Gabriel Nicolet's Miss Beaumont, Mr. Robert
Brough's Surgeon-Colonel 7. G. Gallwey, C.B., and
Miss B. Macdonald's Miss Heanly. There were,

a large section, and the embroideries reached a The new

of design was apparent. The quality of the fabrics ~ - olic Cathedral

shown by the Windermere, Canterbury, Haslemere, _ - at Westminster,

and Irish weavers was excellent; and some of the '''(WBtttT' " ^ now raPidlY aP"

stencilled decorations of cloths and draperies were v preaching com-

more distinctive and interesting than the needle- . pletion, offers

work. In the latter, the cushion embroidered by ' some magni-

beautiful work bestowed on a worthy subject. But j .: <■ tunities for the

emphasised the need of a higher standard of design, f . .■■„ ^ which it is to

and a more rigorous discipline of amateur workers. j Lt he hoped, in

the cause of all

Henry's Kent Cornfields and The Mill Pond; the ordinary

and The Avenue ; and The Escaped Bird, by Mr. highest importance, if the building is to become

H. Tonks. All these are memorable as land- a worthy expression of what is truest and best

scapes of admirable quality, and completely in in decorative art. We hear with pleasure that

accordance with the best traditions of the Club. Mr. Frank Brangwyn has been asked to prepare

Of the figure-paintings, the most notable were The a design for one of the principal mosaics, and

Toilet, by Mr. W. W. Russell, and two equestrian we heartily congratulate the architect on his

portraits by Mr. Charles Furse. Some delightful choice of so entirely capable an artist. If the

flower studies by Mr. F. E. James, the pastels by remainder of the work is intrusted to men of

Mr. H. B. Brabazon and Mr. Arthur Tomson, and equal artistic ability, the result is certain to give

the water-colour landscapes by Mr. A. W. Rich, to the building an artistic value surpassing that of

added considerably to the interest of the Exhibition, any modern structure in London.