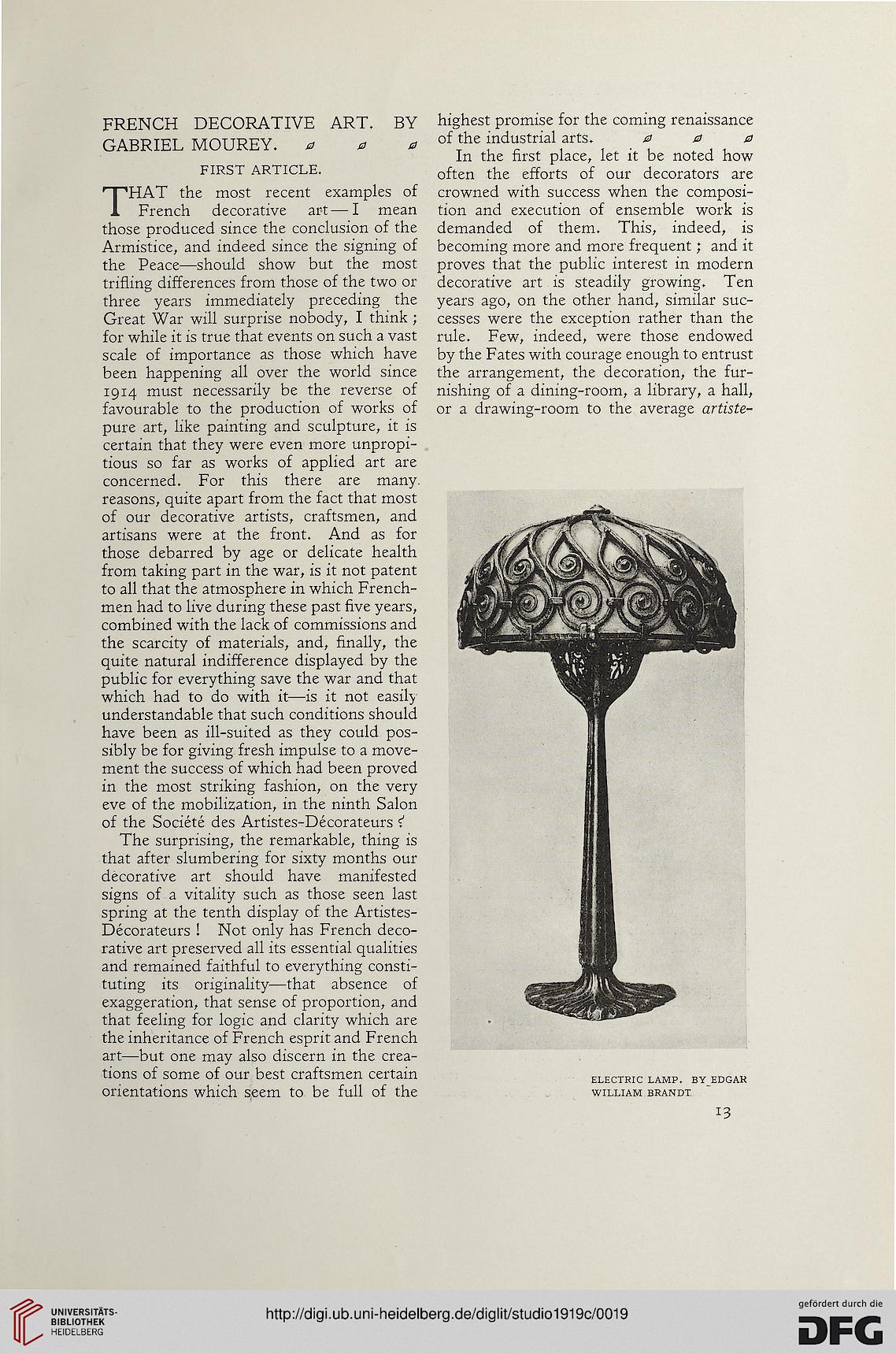 THAT the most recent examples of
French decorative art—I mean
those produced since the conclusion of the
Armistice, and indeed since the signing of
the Peace—should show but the most
trifling differences from those of the two or
three years immediately preceding the
Great War will surprise nobody, I think ;
for while it is true that events on such a vast
scale of importance as those which have
been happening all over the world since
1914 must necessarily be the reverse of
favourable to the production of works of
pure art, like painting and sculpture, it is
certain that they were even more unpropi-
tious so far as works of applied art are
concerned. For this there are many,
reasons, quite apart from the fact that most
of our decorative artists, craftsmen, and
artisans were at the front. And as for
those debarred by age or delicate health
from taking part in the war, is it not patent
to all that the atmosphere in which French-
men had to live during these past five years,
combined with the lack of commissions and
the scarcity of materials, and, finally, the
quite natural indifference displayed by the
public for everything save the war and that
which had to do with it—is it not easily
understandable that such conditions should
have been as ill-suited as they could pos-
sibly be for giving fresh impulse to a move-
ment the success of which had been proved
in the most striking fashion, on the very
eve of the mobilization, in the ninth Salon
of the Societe des Artistes-Decorateurs i
The surprising, the remarkable, thing is
that after slumbering for sixty months our
decorative art should have manifested
signs of a vitality such as those seen last
spring at the tenth display of the Artistes-
Decorateurs ! Not only has French deco-
rative art preserved all its essential qualities
and remained faithful to everything consti-
tuting its originality—that absence of
exaggeration, that sense of proportion, and
that feeling for logic and clarity which are
the inheritance of French esprit and French
art—but one may also discern in the crea-
tions of some of our best craftsmen certain
orientations which seem to be full of the

highest promise for the coming renaissance
of the industrial arts. 000

In the first place, let it be noted how
often the efforts of our decorators are
crowned with success when the composi-
tion and execution of ensemble work is
demanded of them. This, indeed, is
becoming more and more frequent; and it
proves that the public interest in modern
decorative art is steadily growing. Ten
years ago, on the other hand, similar suc-
cesses were the exception rather than the
rule. Few, indeed, were those endowed
by the Fates with courage enough to entrust
the arrangement, the decoration, the fur-
nishing of a dining-room, a library, a hall,
or a drawing-room to the average artiste-