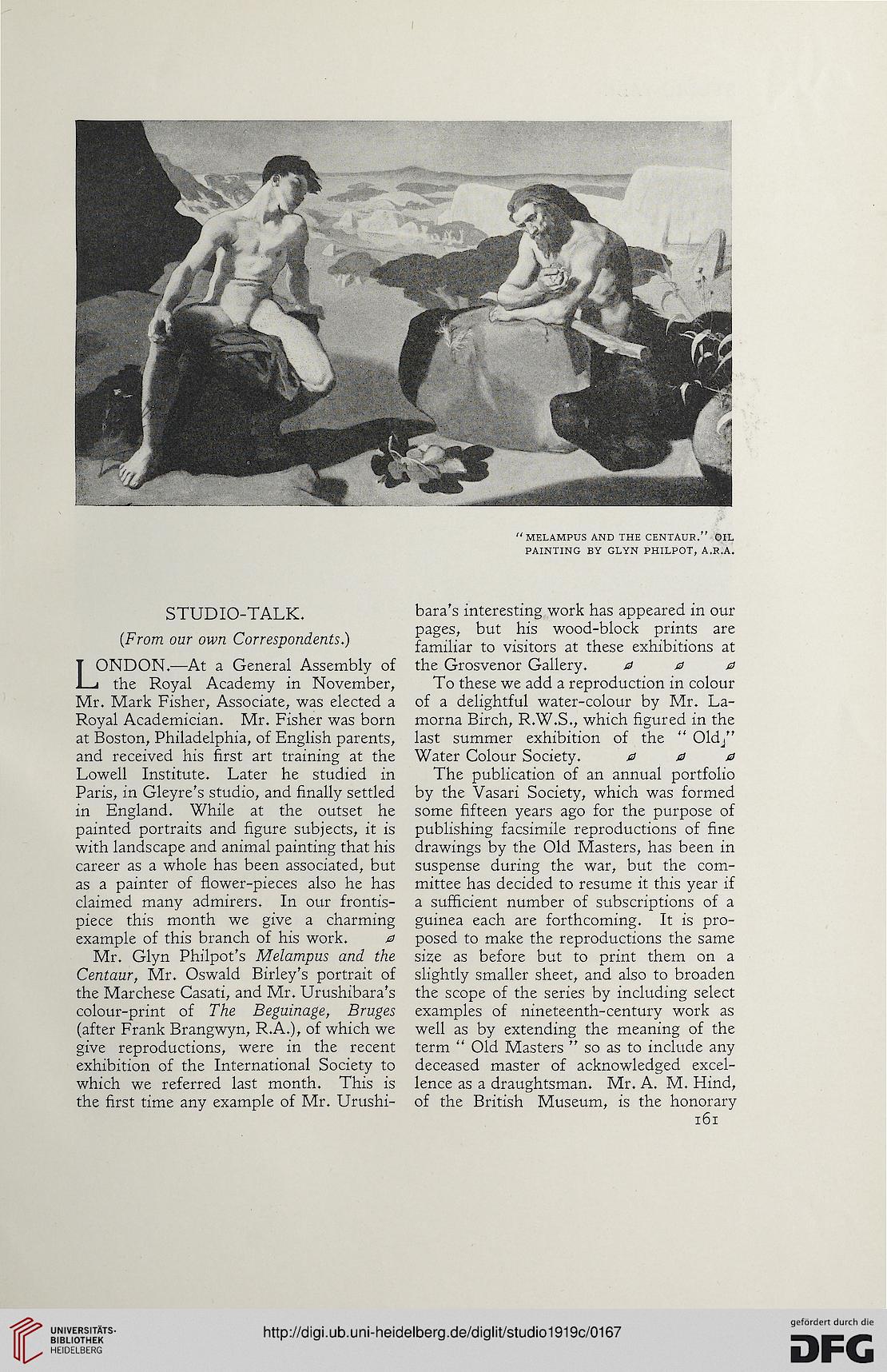 LONDON.—At a General Assembly of
i the Royal Academy in November,
Mr. Mark Fisher, Associate, was elected a
Royal Academician. Mr. Fisher was born
at Boston, Philadelphia, of English parents,
and received his first art training at the
Lowell Institute. Later he studied in
Paris, in Gleyre's studio, and finally settled
in England. While at the outset he
painted portraits and figure subjects, it is
with landscape and animal painting that his
career as a whole has been associated, but
as a painter of flower-pieces also he has
claimed many admirers. In our frontis-
piece this month we give a charming
example of this branch of his work. 0
Mr. Glyn Philpot's Melampus and the
Centaur, Mr. Oswald Birley's portrait of
the Marchese Casati, and Mr. Urushibara's
colour-print of The Beguinage, Bruges
(after Frank Brangwyn, R.A.), of which we
give reproductions, were in the recent
exhibition of the International Society to
which we referred last month. This is
the first time any example of Mr. Urushi-

bara's interesting work has appeared in our
pages, but his wood-block prints are
familiar to visitors at these exhibitions at
the Grosvenor Gallery. 000
To these we add a reproduction in colour
of a delightful water-colour by Mr. La-
morna Birch, R.W.S., which figured in the
last summer exhibition of the u Old/’
Water Colour Society. 000
The publication of an annual portfolio
by the Vasari Society, which was formed
some fifteen years ago for the purpose of
publishing facsimile reproductions of fine
drawings by the Old Masters, has been in
suspense during the war, but the com-
mittee has decided to resume it this year if
a sufficient number of subscriptions of a
guinea each are forthcoming. It is pro-
posed to make the reproductions the same
size as before but to print them on a
slightly smaller sheet, and also to broaden
the scope of the series by including select
examples of nineteenth-century work as
well as by extending the meaning of the
term “ Old Masters ” so as to include any
deceased master of acknowledged excel-
lence as a draughtsman. Mr. A. M. Hind,
of the British Museum, is the honorary