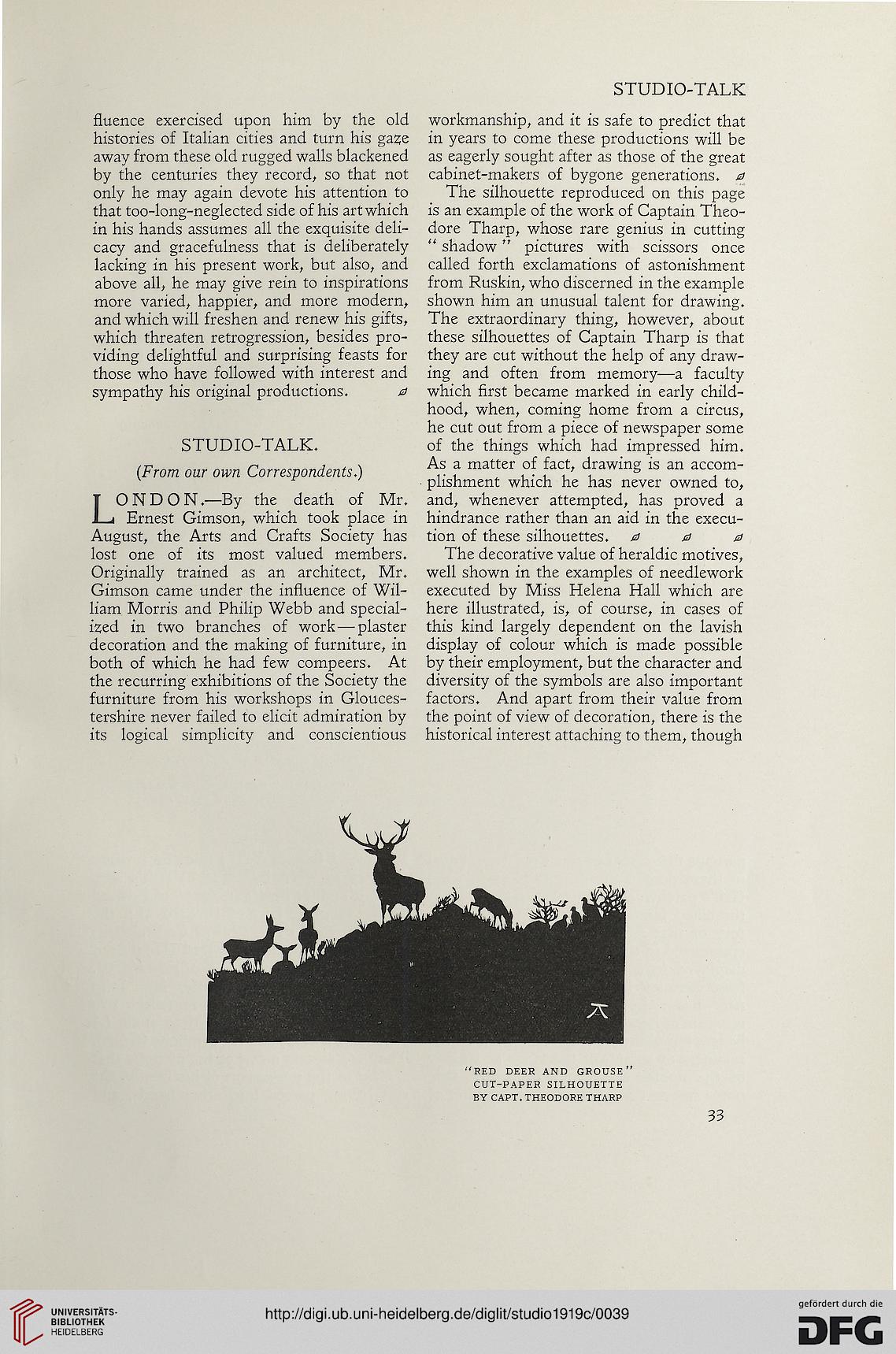 fluence exercised upon him by the old
histories of Italian cities and turn his gaze
away from these old rugged walls blackened
by the centuries they record, so that not
only he may again devote his attention to
that too-long-neglected side of his art which
in his hands assumes all the exquisite deli-
cacy and gracefulness that is deliberately
lacking in his present work, but also, and
above all, he may give rein to inspirations
more varied, happier, and more modern,
and which will freshen and renew his gifts,
which threaten retrogression, besides pro-
viding delightful and surprising feasts for
those who have followed with interest and
sympathy his original productions. 0

LONDON.—By the death of Mr.

Ernest Gimson, which took place in
August, the Arts and Crafts Society has
lost one of its most valued members.
Originally trained as an architect, Mr.
Gimson came under the influence of Wil-
liam Morris and Philip Webb and special-
ized in two branches of work—plaster
decoration and the making of furniture, in
both of which he had few compeers. At
the recurring exhibitions of the Society the
furniture from his workshops in Glouces-
tershire never failed to elicit admiration by
its logical simplicity and conscientious

workmanship, and it is safe to predict that
in years to come these productions will be
as eagerly sought after as those of the great
cabinet-makers of bygone generations, a
The silhouette reproduced on this page
is an example of the work of Captain Theo-
dore Tharp, whose rare genius in cutting
“ shadow ” pictures with scissors once
called forth exclamations of astonishment
from Ruskin, who discerned in the example
shown him an unusual talent for drawing.
The extraordinary thing, however, about
these silhouettes of Captain Tharp is that
they are cut without the help of any draw-
ing and often from memory—a faculty
which first became marked in early child-
hood, when, coming home from a circus,
he cut out from a piece of newspaper some
of the things which had impressed him.
As a matter of fact, drawing is an accom-
plishment which he has never owned to,
and, whenever attempted, has proved a
hindrance rather than an aid in the execu-
tion of these silhouettes. 000
The decorative value of heraldic motives,
well shown in the examples of needlework
executed by Miss Helena Hall which are
here illustrated, is, of course, in cases of
this kind largely dependent on the lavish
display of colour which is made possible
by their employment, but the character and
diversity of the symbols are also important
factors. And apart from their value from
the point of view of decoration, there is the
historical interest attaching to them, though