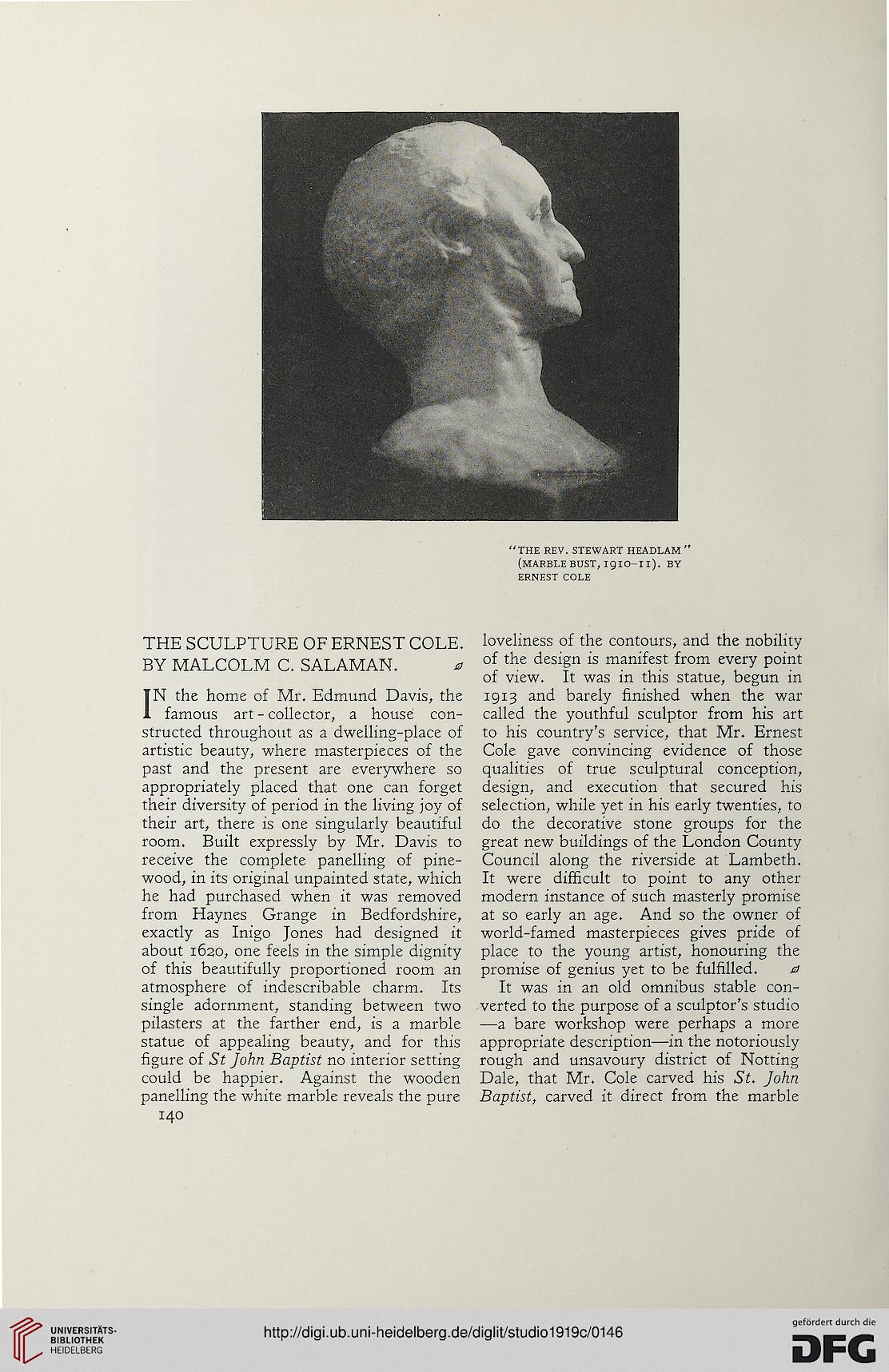 Information about OCR text
THE SCULPTURE OF ERNEST COLE.
BY MALCOLM C. SALAMAN. *

IN the home of Mr. Edmund Davis, the
famous art - collector, a house con-
structed throughout as a dwelling-place of
artistic beauty, where masterpieces of the
past and the present are everywhere so
appropriately placed that one can forget
their diversity of period in the living joy of
their art, there is one singularly beautiful
room. Built expressly by Mr. Davis to
receive the complete panelling of pine-
wood, in its original unpainted state, which
he had purchased when it was removed
from Haynes Grange in Bedfordshire,
exactly as Inigo Jones had designed it
about 1620, one feels in the simple dignity
of this beautifully proportioned room an
atmosphere of indescribable charm. Its
single adornment, standing between two
pilasters at the farther end, is a marble
statue of appealing beauty, and for this
figure of .St John Baptist no interior setting
could be happier. Against the wrooden
panelling the white marble reveals the pure
140

loveliness of the contours, and the nobility
of the design is manifest from every point
of view. It was in this statue, begun in
1913 and barely finished when the war
called the youthful sculptor from his art
to his country's service, that Mr. Ernest
Cole gave convincing evidence of those
qualities of true sculptural conception,
design, and execution that secured his
selection, while yet in his early twenties, to
do the decorative stone groups for the
great new buildings of the London County
Council along the riverside at Lambeth.
It were difficult to point to any other
modern instance of such masterly promise
at so early an age. And so the owner of
world-famed masterpieces gives pride of
place to the young artist, honouring the
promise of genius yet to be fulfilled. 0
It was in an old omnibus stable con-
verted to the purpose of a sculptor’s studio
—a bare workshop were perhaps a more
appropriate description—in the notoriously
rough and unsavoury district of Notting
Dale, that Mr. Cole carved his St. John
Baptist, carved it direct from the marble