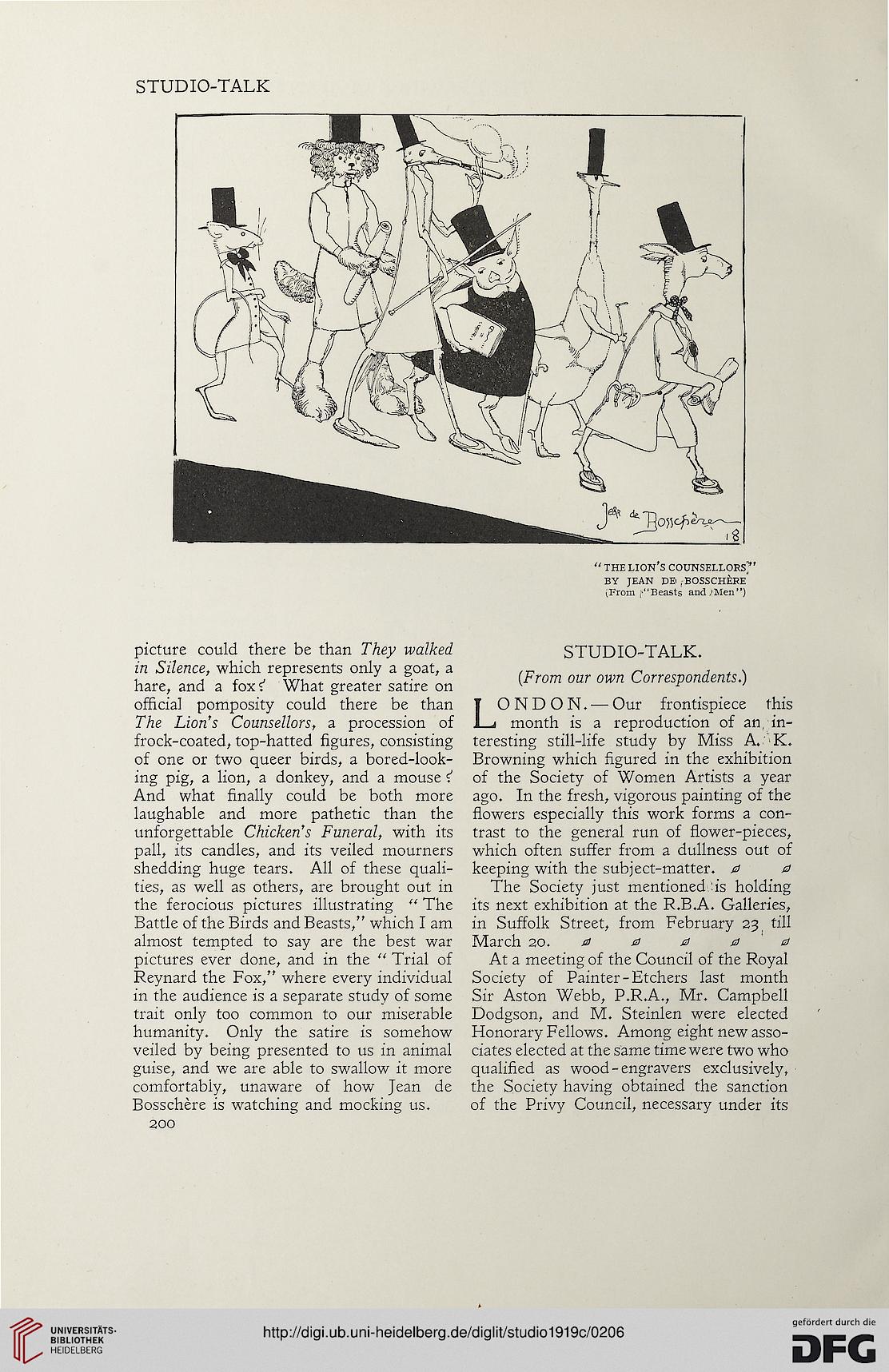 picture could there be than They walked
in Silence, which represents only a goat, a
hare, and a fox'' What greater satire on
official pomposity could there be than
The Lion's Counsellors, a procession of
frock-coated, top-hatted figures, consisting
of one or two queer birds, a bored-look-
ing pig, a lion, a donkey, and a mouse i
And what finally could be both more
laughable and more pathetic than the
unforgettable Chicken's Funeral, with its
pall, its candles, and its veiled mourners
shedding huge tears. All of these quali-
ties, as well as others, are brought out in
the ferocious pictures illustrating u The
Battle of the Birds and Beasts,” which I am
almost tempted to say are the best war
pictures ever done, and in the “ Trial of
Reynard the Fox,” where every individual
in the audience is a separate study of some
trait only too common to our miserable
humanity. Only the satire is somehow
veiled by being presented to us in animal
guise, and we are able to swallow it more
comfortably, unaware of how Jean de
Bosschere is watching and mocking us.

LONDON. — Our frontispiece this
month is a reproduction of an, in-
teresting still-life study by Miss A. K.
Browning which figured in the exhibition
of the Society of Women Artists a year
ago. In the fresh, vigorous painting of the
flowers especially this work forms a con-
trast to the general run of flower-pieces,
which often suffer from a dullness out of
keeping with the subject-matter. 0 0

The Society just mentioned is holding
its next exhibition at the R.B.A. Galleries,
in Suffolk Street, from February 23 till
March 20. 0 0 0 0 0

At a meeting of the Council of the Royal
Society of Painter-Etchers last month
Sir Aston Webb, P.R.A., Mr. Campbell
Dodgson, and M. Steinlen were elected
Honorary Fellows. Among eight new asso-
ciates elected at the same time were two who
qualified as wood-engravers exclusively,
the Society having obtained the sanction
of the Privy Council, necessary under its