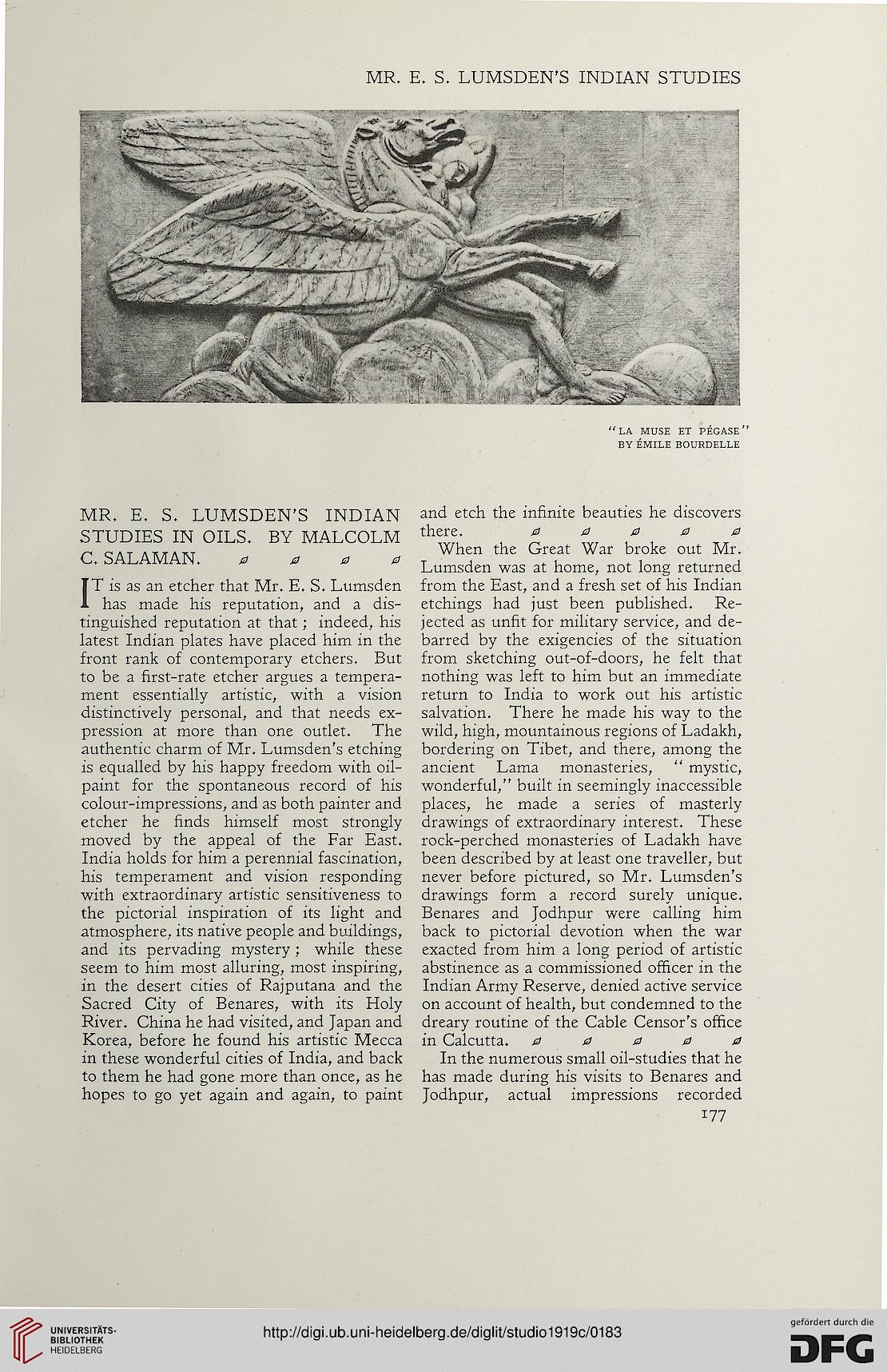 IT is as an etcher that Mr. E. S. Lumsden
has made his reputation, and a dis-
tinguished reputation at that; indeed, his
latest Indian plates have placed him in the
front rank of contemporary etchers. But
to be a first-rate etcher argues a tempera-
ment essentially artistic, with a vision
distinctively personal, and that needs ex-
pression at more than one outlet. The
authentic charm of Mr. Lumsden's etching
is equalled by his happy freedom with oil-
paint for the spontaneous record of his
colour-impressions, and as both painter and
etcher he finds himself most strongly
moved by the appeal of the Far East.
India holds for him a perennial fascination,
his temperament and vision responding
with extraordinary artistic sensitiveness to
the pictorial inspiration of its light and
atmosphere, its native people and buildings,
and its pervading mystery ; while these
seem to him most alluring, most inspiring,
in the desert cities of Rajputana and the
Sacred City of Benares, with its Holy
River. China he had visited, and Japan and
Korea, before he found his artistic Mecca
in these wonderful cities of India, and back
to them he had gone more than once, as he
hopes to go yet again and again, to paint

and etch the infinite beauties he discovers
there. 00000

When the Great War broke out Mr.
Lumsden was at home, not long returned
from the East, and a fresh set of his Indian
etchings had just been published. Re-
jected as unfit for military service, and de-
barred by the exigencies of the situation
from sketching out-of-doors, he felt that
nothing was left to him but an immediate
return to India to work out his artistic
salvation. There he made his way to the
wild, high, mountainous regions of Ladakh,
bordering on Tibet, and there, among the
ancient Lama monasteries, ** mystic,
wonderful,” built in seemingly inaccessible
places, he made a series of masterly
drawings of extraordinary interest. These
rock-perched monasteries of Ladakh have
been described by at least one traveller, but
never before pictured, so Mr. Lumsden's
drawings form a record surely unique.
Benares and Jodhpur were calling him
back to pictorial devotion when the war
exacted from him a long period of artistic
abstinence as a commissioned officer in the
Indian Army Reserve, denied active service
on account of health, but condemned to the
dreary routine of the Cable Censor’s office
in Calcutta. 00000
In the numerous small oil-studies that he
has made during his visits to Benares and
Jodhpur, actual impressions recorded