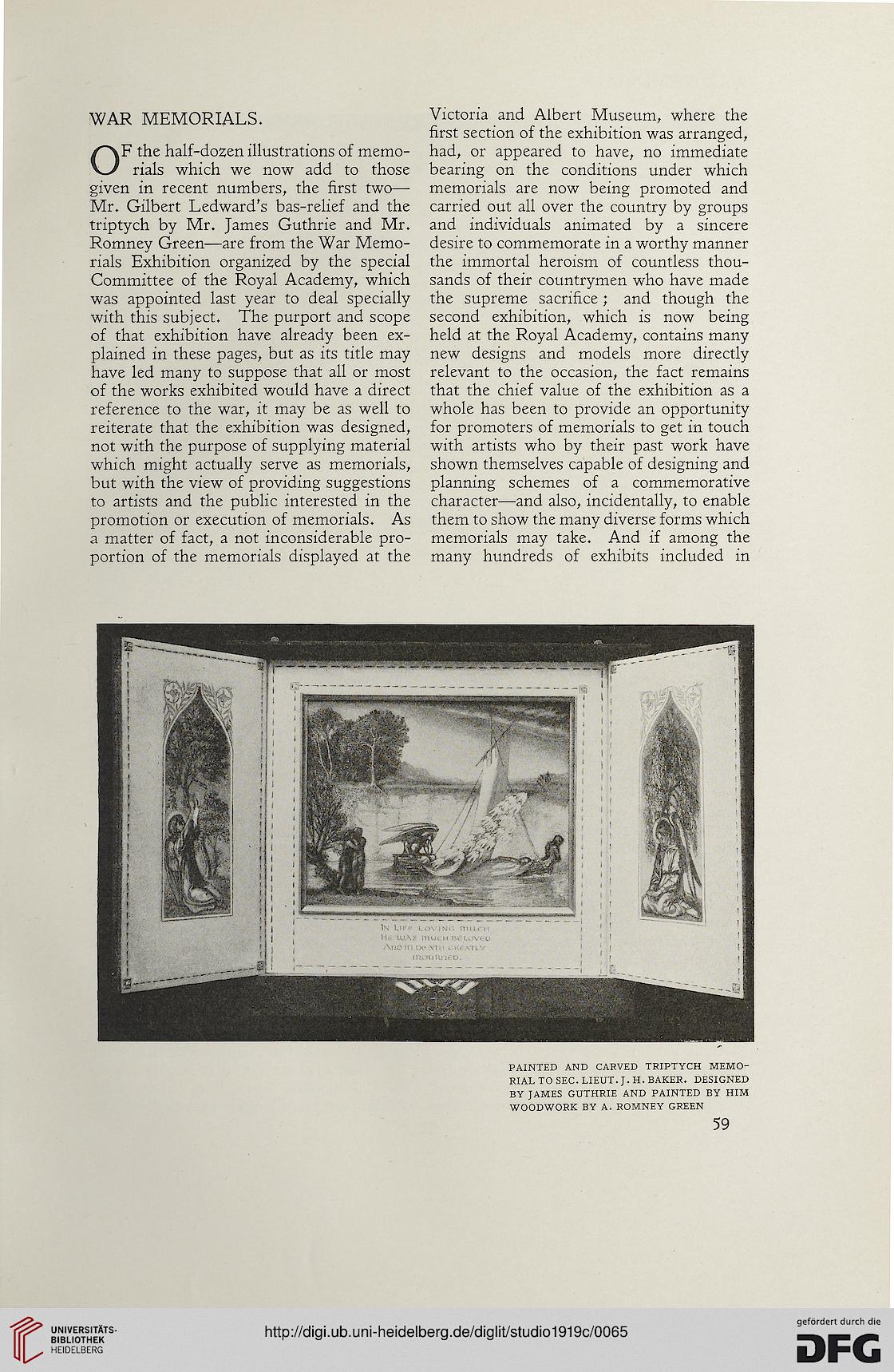 OF the half-dozen illustrations of memo-
rials which we now add to those
given in recent numbers, the first two—
Mr. Gilbert Ledward's bas-relief and the
triptych by Mr. James Guthrie and Mr.
Romney Green—are from the War Memo-
rials Exhibition organized by the special
Committee of the Royal Academy, which
was appointed last year to deal specially
with this subject. The purport and scope
of that exhibition have already been ex-
plained in these pages, but as its title may
have led many to suppose that all or most
of the works exhibited would have a direct
reference to the war, it may be as well to
reiterate that the exhibition was designed,
not with the purpose of supplying material
which might actually serve as memorials,
but with the view of providing suggestions
to artists and the public interested in the
promotion or execution of memorials. As
a matter of fact, a not inconsiderable pro-
portion of the memorials displayed at the

Victoria and Albert Museum, where the
first section of the exhibition was arranged,
had, or appeared to have, no immediate
bearing on the conditions under which
memorials are now being promoted and
carried out all over the country by groups
and individuals animated by a sincere
desire to commemorate in a worthy manner
the immortal heroism of countless thou-
sands of their countrymen who have made
the supreme sacrifice; and though the
second exhibition, which is now being
held at the Royal Academy, contains many
new designs and models more directly
relevant to the occasion, the fact remains
that the chief value of the exhibition as a
whole has been to provide an opportunity
for promoters of memorials to get in touch
with artists who by their past work have
shown themselves capable of designing and
planning schemes of a commemorative
character—and also, incidentally, to enable
them to show the many diverse forms which
memorials may take. And if among the
many hundreds of exhibits included in

PAINTED AND CARVED TRIPTYCH MEMO-
RIAL TO SEC. LIEUT.}. H. BAKER. DESIGNED
BY JAMES GUTHRIE AND PAINTED BY HIM
WOODWORK BY A. ROMNEY GREEN