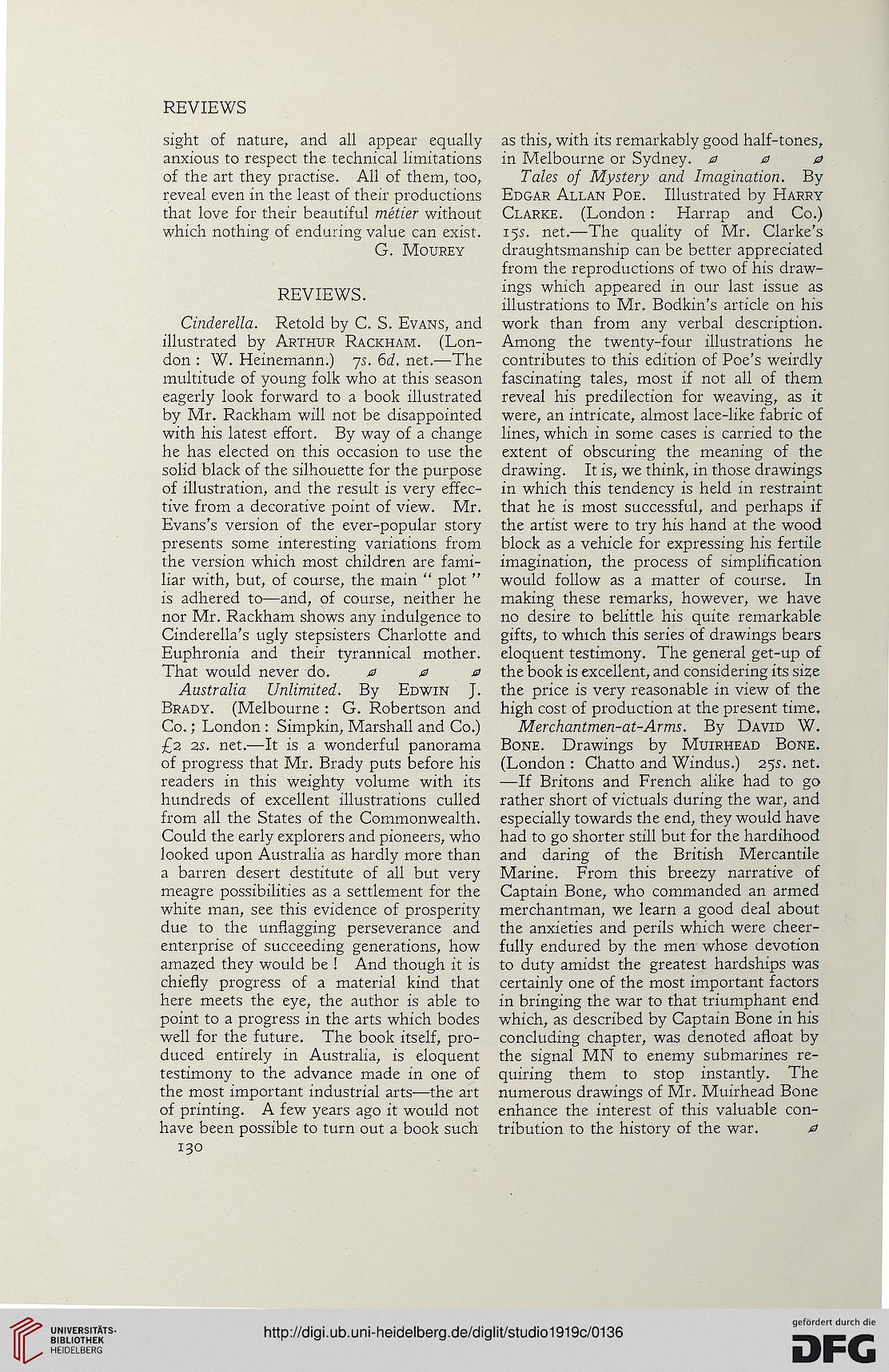 sight of nature, and all appear equally
anxious to respect the technical limitations
of the art they practise. All of them, too,
reveal even in the least of their productions
that love for their beautiful metier without
which nothing of enduring value can exist.

Cinderella. Retold by C. S. Evans, and
illustrated by Arthur Rackham. (Lon-
don : W. Heinemann.) 7s. 6d. net.—The
multitude of young folk who at this season
eagerly look forward to a book illustrated
by Mr. Rackham will not be disappointed
with his latest effort. By way of a change
he has elected on this occasion to use the
solid black of the silhouette for the purpose
of illustration, and the result is very effec-
tive from a decorative point of view. Mr.
Evans's version of the ever-popular story
presents some interesting variations from
the version wThich most children are fami-
liar with, but, of course, the main ** plot ''
is adhered to—and, of course, neither he
nor Mr. Rackham shows any indulgence to
Cinderella's ugly stepsisters Charlotte and
Euphronia and their tyrannical mother.
That would never do. 000

Australia Unlimited. By Edwin J.
Brady. (Melbourne : G. Robertson and
Co.; London: Simpkin, Marshall and Co.)
£2 2S. net.—It is a wonderful panorama
of progress that Mr. Brady puts before his
readers in this weighty volume with its
hundreds of excellent illustrations culled
from all the States of the Commonwealth.
Could the early explorers and pioneers, who
looked upon Australia as hardly more than
a barren desert destitute of all but very
meagre possibilities as a settlement for the
white man, see this evidence of prosperity
due to the unflagging perseverance and
enterprise of succeeding generations, how
amazed they would be ! And though it is
chiefly progress of a material kind that
here meets the eye, the author is able to
point to a progress in the arts which bodes
well for the future. The book itself, pro-
duced entirely in Australia, is eloquent
testimony to the advance made in one of
the most important industrial arts—the art
of printing. A few years ago it would not
have been possible to turn out a book such

as this, with its remarkably good half-tones,
in Melbourne or Sydney. 000

15s. net.—The quality of Mr. Clarke's
draughtsmanship can be better appreciated
from the reproductions of two of his draw-
ings which appeared in our last issue as
illustrations to Mr. Bodkin's article on his
work than from any verbal description.
Among the twenty-four illustrations he
contributes to this edition of Poe's weirdly
fascinating tales, most if not all of them
reveal his predilection for weaving, as it
were, an intricate, almost lace-like fabric of
lines, which in some cases is carried to the
extent of obscuring the meaning of the
drawing. It is, we think, in those drawings
in which this tendency is held in restraint
that he is most successful, and perhaps if
the artist were to try his hand at the wood
block as a vehicle for expressing his fertile
imagination, the process of simplification
would follow as a matter of course. In
making these remarks, however, we have
no desire to belittle his quite remarkable
gifts, to which this series of drawings bears
eloquent testimony. The general get-up of
the book is excellent, and considering its size
the price is very reasonable in view of the
high cost of production at the present time.

Merchantmen-at-Arms. By David W.
Bone. Drawings by Muirhead Bone.
(London : Chatto and Windus.) 25s. net.
—If Britons and French alike had to go
rather short of victuals during the war, and
especially towards the end, they would have
had to go shorter still but for the hardihood
and daring of the British Mercantile
Marine. From this breezy narrative of
Captain Bone, who commanded an armed
merchantman, we learn a good deal about
the anxieties and perils which were cheer-
fully endured by the men whose devotion
to duty amidst the greatest hardships was
certainly one of the most important factors
in bringing the war to that triumphant end
which, as described by Captain Bone in his
concluding chapter, was denoted afloat by
the signal MN to enemy submarines re-
quiring them to stop instantly. The
numerous drawings of Mr. Muirhead Bone
enhance the interest of this valuable con-
tribution to the history of the war. 0