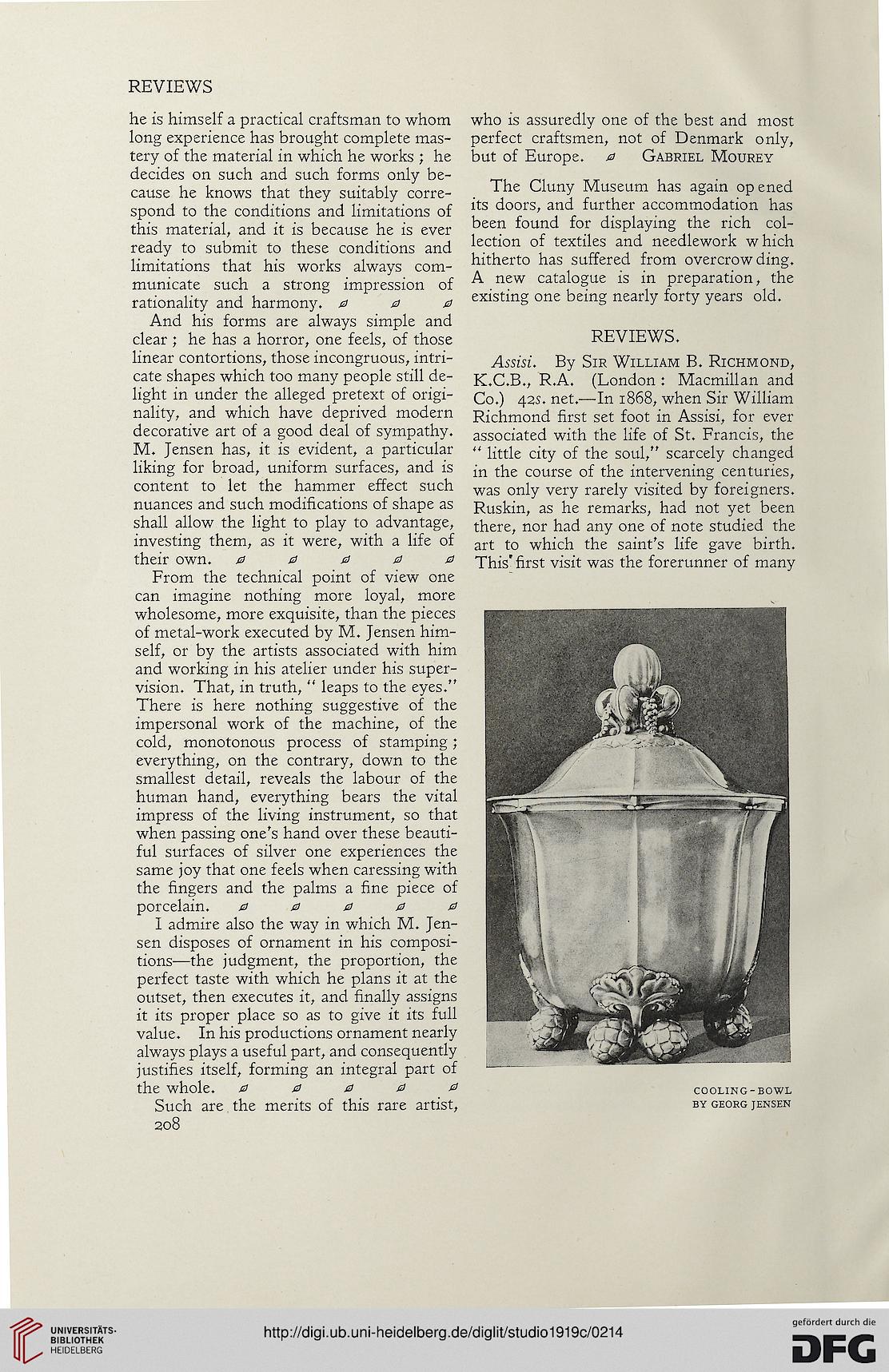 he is himself a practical craftsman to whom
long experience has brought complete mas-
tery of the material in which he works ; he
decides on such and such forms only be-
cause he knows that they suitably corre-
spond to the conditions and limitations of
this material, and it is because he is ever
ready to submit to these conditions and
limitations that his works always com-
municate such a strong impression of
rationality and harmony. 000
And his forms are always simple and
clear ; he has a horror, one feels, of those
linear contortions, those incongruous, intri-
cate shapes which too many people still de-
light in under the alleged pretext of origi-
nality, and which have deprived modern
decorative art of a good deal of sympathy.
M. Jensen has, it is evident, a particular
liking for broad, uniform surfaces, and is
content to let the hammer effect such
nuances and such modifications of shape as
shall allow the light to play to advantage,
investing them, as it were, with a life of
their own. 00000
From the technical point of view one
can imagine nothing more loyal, more
wholesome, more exquisite, than the pieces
of metal-work executed by M. Jensen him-
self, or by the artists associated with him
and working in his atelier under his super-
vision. That, in truth, u leaps to the eyes/’
There is here nothing suggestive of the
impersonal work of the machine, of the
cold, monotonous process of stamping;
everything, on the contrary, down to the
smallest detail, reveals the labour of the
human hand, everything bears the vital
impress of the living instrument, so that
when passing one's hand over these beauti-
ful surfaces of silver one experiences the
same joy that one feels when caressing with
the fingers and the palms a fine piece of
porcelain. 00000
I admire also the way in which M. Jen-
sen disposes of ornament in his composi-
tions—the judgment, the proportion, the
perfect taste with which he plans it at the
outset, then executes it, and finally assigns
it its proper place so as to give it its full
value. In his productions ornament nearly
always plays a useful part, and consequently
justifies itself, forming an integral part of
the whole. 00000
Such are the merits of this rare artist,
208

who is assuredly one of the best and most
perfect craftsmen, not of Denmark only,
but of Europe. 0 Gabriel Mourey

The Cluny Museum has again op ened
its doors, and further accommodation has
been found for displaying the rich col-
lection of textiles and needlework which
hitherto has suffered from overcrowding.
A new catalogue is in preparation, the
existing one being nearly forty years old.

Assisi. By Sir William B. Richmond,
K.C.B., R.A. (London : Macmillan and
Co.) 42s. net.—In 1868, when Sir William
Richmond first set foot in Assisi, for ever
associated with the life of St. Francis, the
“ little city of the soul," scarcely changed
in the course of the intervening centuries,
was only very rarely visited by foreigners.
Ruskin, as he remarks, had not yet been
there, nor had any one of note studied the
art to which the saint's life gave birth.
This' first visit was the forerunner of many