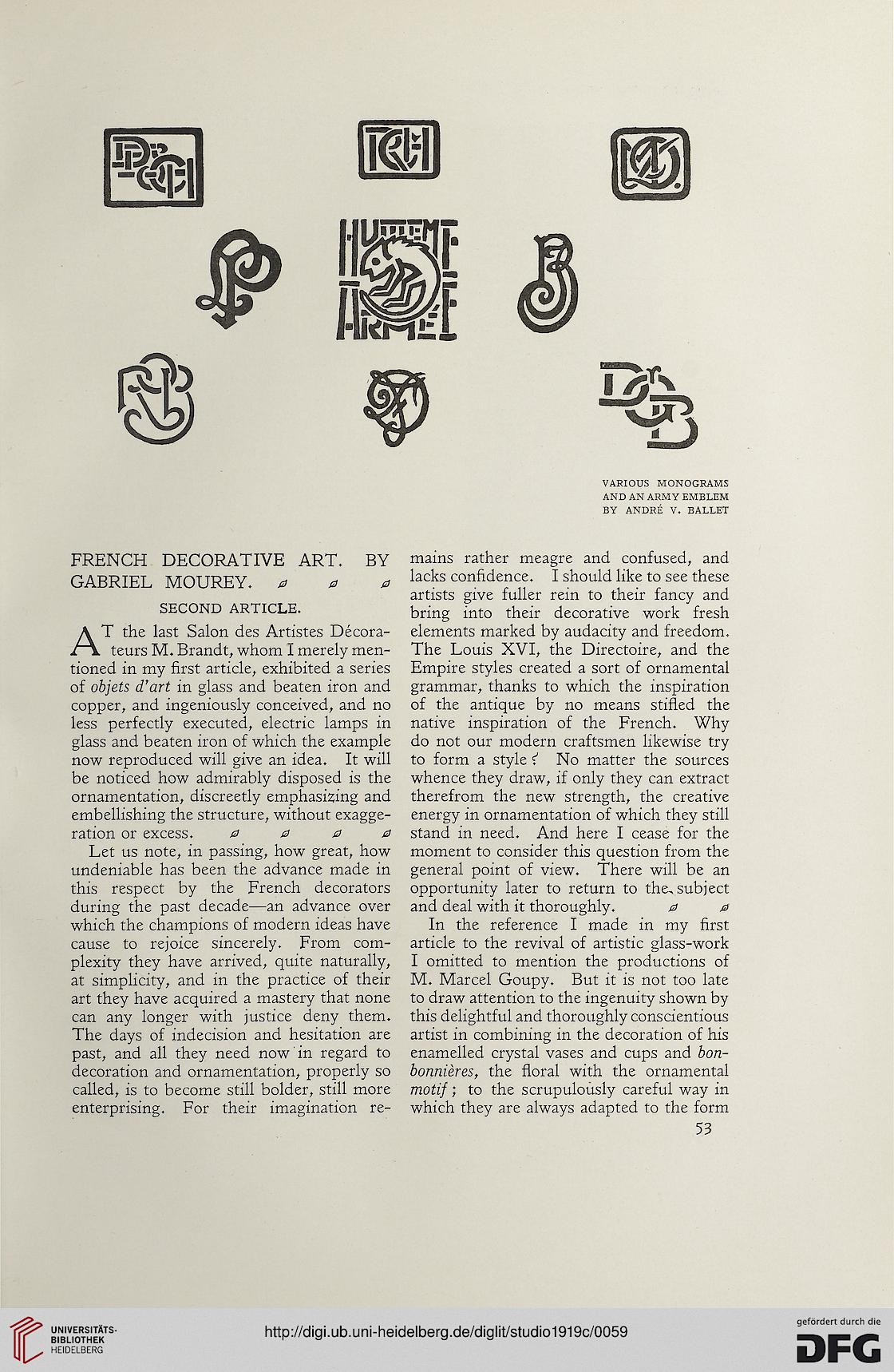 AT the last Salon des Artistes Decora-
teurs M. Brandt, whom I merely men-
tioned in my first article, exhibited a series
of objets d’art in glass and beaten iron and
copper, and ingeniously conceived, and no
less perfectly executed, electric lamps in
glass and beaten iron of which the example
now reproduced will give an idea. It will
be noticed how admirably disposed is the
ornamentation, discreetly emphasizing and
embellishing the structure, without exagge-
ration or excess. 0000
Let us note, in passing, how great, how
undeniable has been the advance made in
this respect by the French decorators
during the past decade—an advance over
which the champions of modern ideas have
cause to rejoice sincerely. From com-
plexity they have arrived, quite naturally,
at simplicity, and in the practice of their
art they have acquired a mastery that none
can any longer with justice deny them.
The days of indecision and hesitation are
past, and all they need now in regard to
decoration and ornamentation, properly so
called, is to become still bolder, still more
enterprising. For their imagination re-

mains rather meagre and confused, and
lacks confidence. I should like to see these
artists give fuller rein to their fancy and
bring into their decorative work fresh
elements marked by audacity and freedom.
The Louis XVI, the Directoire, and the
Empire styles created a sort of ornamental
grammar, thanks to which the inspiration
of the antique by no means stifled the
native inspiration of the French. Why
do not our modern craftsmen likewise try
to form a style i No matter the sources
whence they draw, if only they can extract
therefrom the new strength, the creative
energy in ornamentation of which they still
stand in need. And here I cease for the
moment to consider this question from the
general point of view. There will be an
opportunity later to return to the, subject
and deal with it thoroughly. 0 0

In the reference I made in my first
article to the revival of artistic glass-work
I omitted to mention the productions of
M. Marcel Goupy. But it is not too late
to draw attention to the ingenuity shown by
this delightful and thoroughly conscientious
artist in combining in the decoration of his
enamelled crystal vases and cups and bon-
bonnierest the floral with the ornamental
motif; to the scrupulously careful way in
which they are always adapted to the form