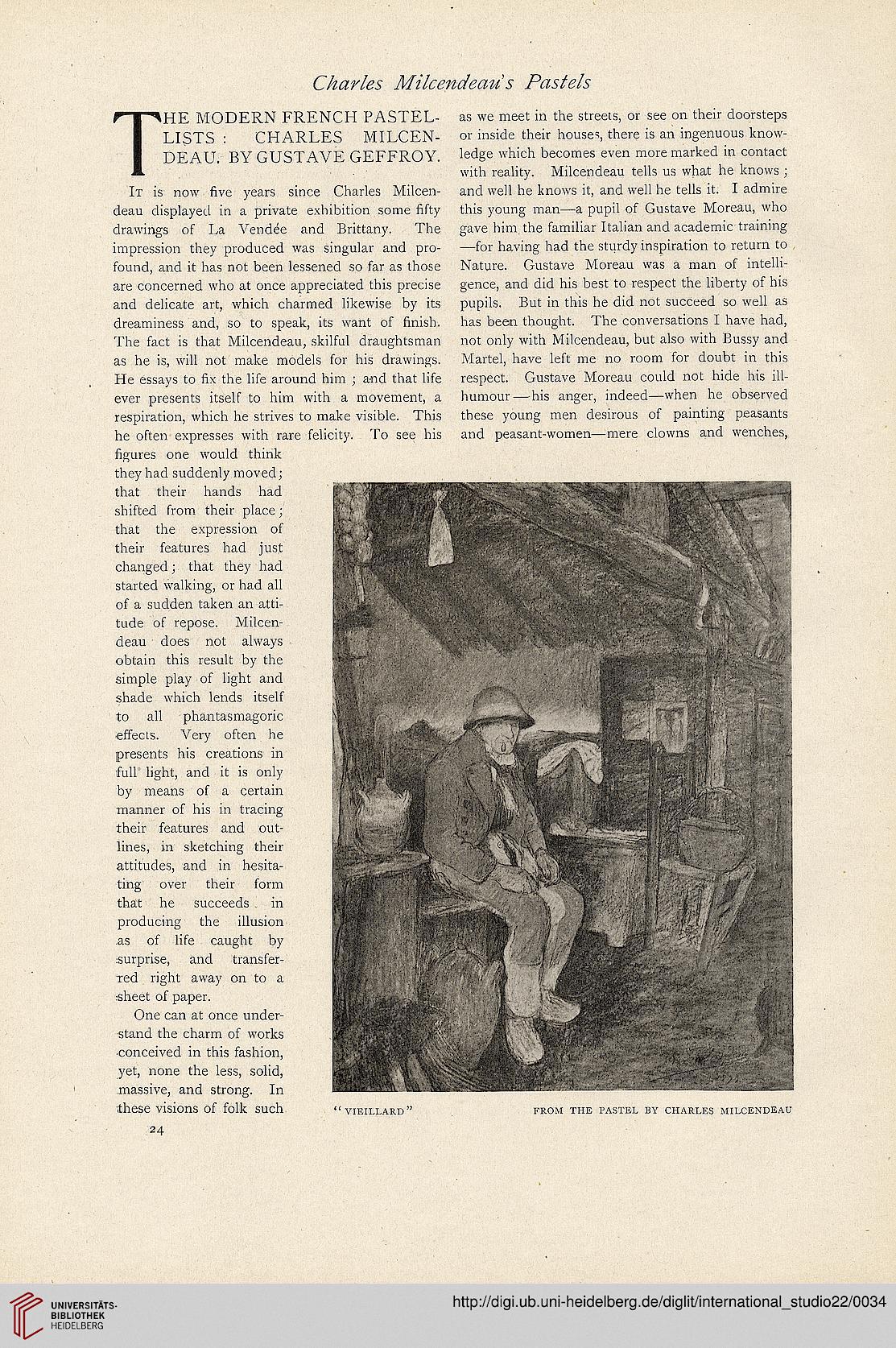 
r*rSHE MODERN FRENCH PASTEL-
LISTS : CHARLES MILCEN-
DEAU. BY GUSTAVE GEFFROY.
IT is now five years since Charles Milcen-
deau displayed in a private exhibition some fifty
drawings of La Vendee and Brittany. The
impression they produced was singular and pro-
found, and it has not been lessened so far as those
are concerned who at once appreciated this precise
and delicate art, which charmed likewise by its
dreaminess and, so to speak, its want of finish.
The fact is that Milcendeau, skilful draughtsman
as he is, will not make models for his drawings.
He essays to fix the life around him ; and that life
ever presents itself to him with a movement, a
respiration, which he strives to make visible. This
he often expresses with rare felicity. To see his
figures one would think
they had suddenly moved;
that their hands had
shifted from their place;
that the expression of
their features had just
changed; that they had
started walking, or had all
of a sudden taken an atti-
tude of repose. Milcen-
deau does not always
obtain this result by the
simple play of light and
shade which lends itself
to all phantasmagoric
effects. Very often he
presents his creations in
full light, and it is only
by means of a certain
manner of his in tracing
their features and out-
lines, in sketching their
attitudes, and in hesita-
ting over their form
that he succeeds in
producing the illusion
as of life caught by
surprise, and transfer-
red right away on to a
sheet of paper.
One can at once under-
stand the charm of works
conceived in this fashion,
yet, none the less, solid,
massive, and strong. In
these Visions of folk such "VIEILLARD" FROM THE PASTEL BY CHARLES MILCENDEAU
24

as we meet in the streets, or see on their doorsteps
or inside their houses, there is an ingenuous know-
ledge which becomes even more marked in contact
with reality. Milcendeau tells us what he knows ;
and well he knows it, and well he tells it. I admire
this young man—a pupil of Gustave Moreau, who
gave him the familiar Italian and academic training
—for having had the sturdy inspiration to return to
Nature. Gustave Moreau was a man of intelli-
gence, and did his best to respect the liberty of his
pupils. But in this he did not succeed so well as
has been thought. The conversations I have had,
not only with Milcendeau, but also with Bussy and
Martel, have left me no room for doubt in this
respect. Gustave Moreau could not hide his ill-
humour—his anger, indeed—when he observed
these young men desirous of painting peasants
and peasant-women—mere clowns and wenches,