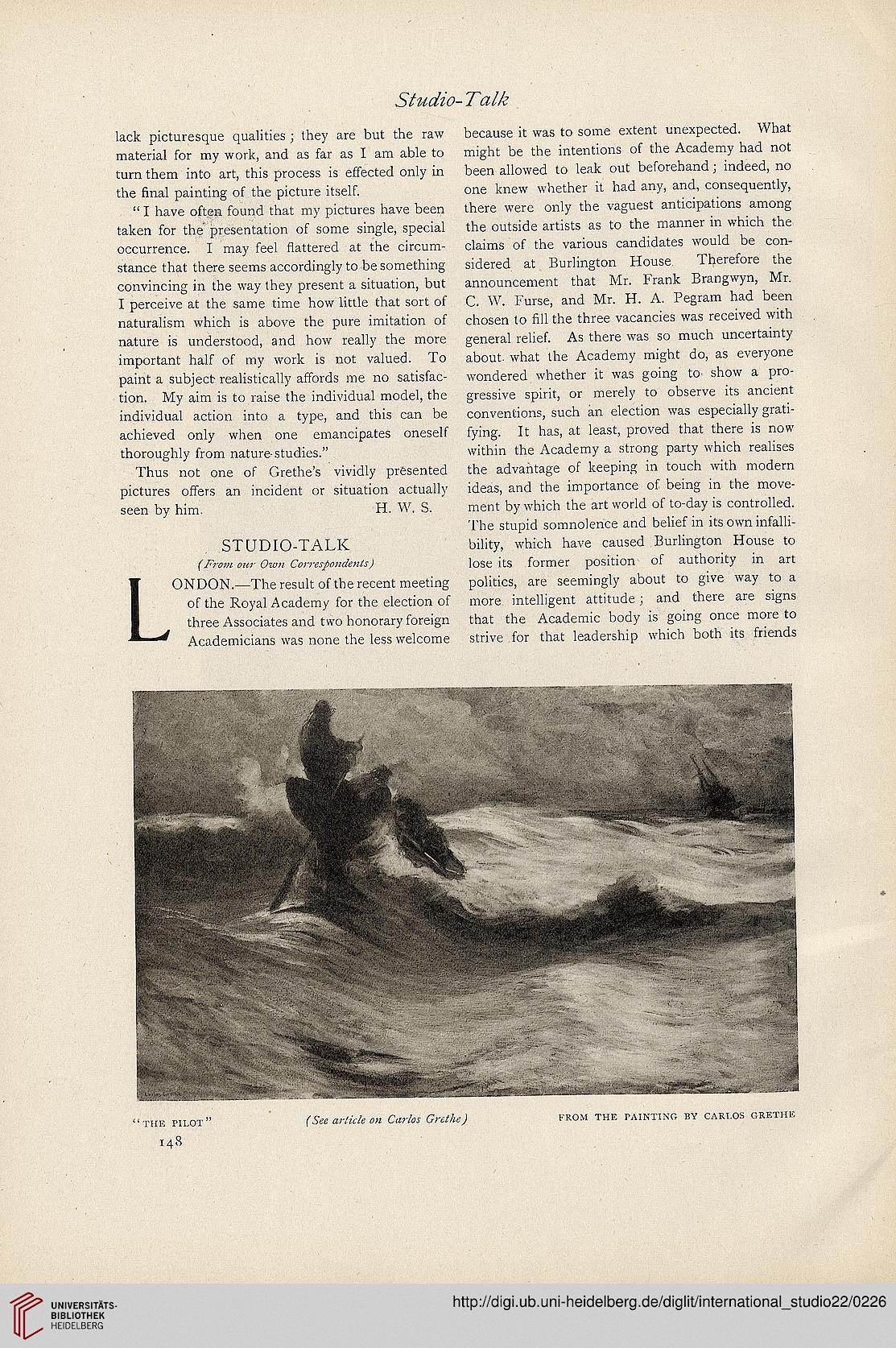 lack picturesque qualities ; they are but the raw
material for my work, and as far as I am able to
turn them into art, this process is effected only in
the final painting of the picture itself.
" I have often found that my pictures have been
taken for the presentation of some single, special
occurrence. I may feel flattered at the circum-
stance that there seems accordingly to be something
convincing in the way they present a situation, but
I perceive at the same time how little that sort of
naturalism which is above the pure imitation of
nature is understood, and how really the more
important half of my work is not valued. To
paint a subject realistically affords me no satisfac-
tion. My aim is to raise the individual model, the
individual action into a type, and this can be
achieved only when one emancipates oneself
thoroughly from nature-studies."
Thus not one of Crethe's vividly presented
pictures offers an incident or situation actually
seen by him. H. W. S.
STUDIO-TALK
ONDON.—The result of the recent meeting
of the Royal Academy for the election of
three Associates and two honorary foreign
Academicians was none the less welcome

because it was to some extent unexpected. What
might be the intentions of the Academy had not
been allowed to leak out beforehand; indeed, no
one knew whether it had any, and, consequently,
there were only the vaguest anticipations among
the outside artists as to the manner in which the
claims of the various candidates would be con-
sidered at Burlington House Therefore the
announcement that Mr. Frank Brangwyn, Mr.
C. W. Furse, and Mr. H. A. Pegram had been
chosen to fill the three vacancies was received with
general relief. As there was so much uncertainty
about what the Academy might do, as everyone
wondered whether it was going to show a pro-
gressive spirit, or merely to observe its ancient
conventions, such an election was especially grati-
fying. It has, at least, proved that there is now
within the Academy a strong party which realises
the advantage of keeping in touch with modern
ideas, and the importance of being in the move-
ment by which the art world of to-day is controlled.
The stupid somnolence and belief in its own infalli-
bility, which have caused Burlington House to
lose its former position of authority in art
politics, are seemingly about to give way to a
more intelligent attitude; and there are signs
that the Academic body is going once more to
strive for that leadership which both its friends


FROM THE TAINTING BY CARLOS GRETHK