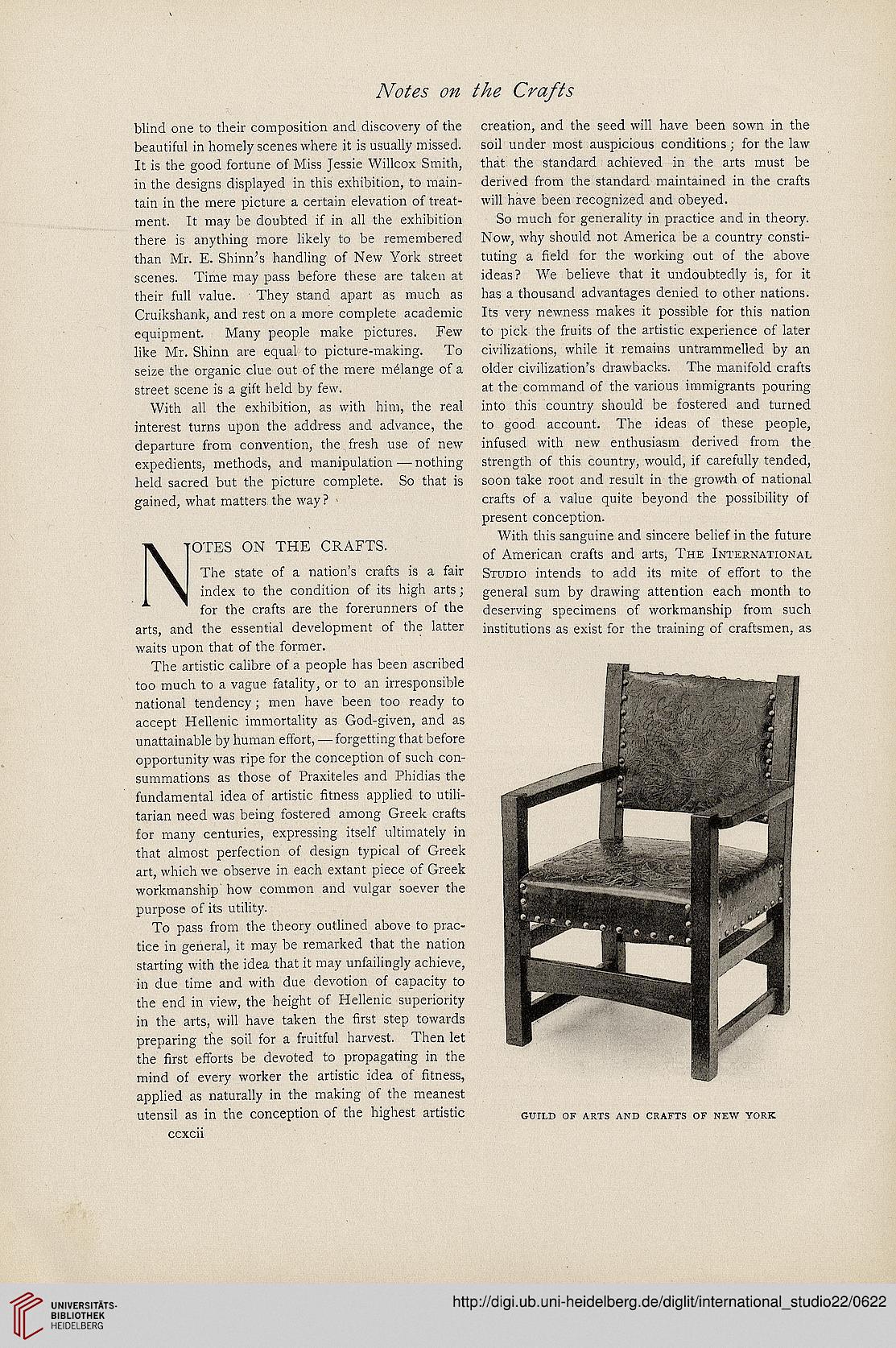 Mind one to their composition and discovery of the
beautiful in homeiy scenes where it is usuaiiy missed.
It is the good fortune of Miss Jessie Wiiicox Smith,
in the designs displayed in this exhibition, to main-
tain in the mere picture a certain elevation of treat-
ment. It may be doubted if in all the exhibition
there is anything more likely to be remembered
than Mr. E. Shinn's handling of New York street
scenes. Time may pass before these are taken at
their full value. They stand apart as much as
Cruikshank, and rest on a more complete academic
equipment. Many people make pictures. Few
like Mr. Shinn are equal to picture-making. To
seize the organic clue out of the mere melange of a
street scene is a gift held by few.
With all the exhibition, as with him, the real
interest turns upon the address and advance, the
departure from convention, the fresh use of new
expedients, methods, and manipulation — nothing
held sacred but the picture complete. So that is
gained, what matters the way?
OTES ON THE CRAFTS.
The state of a nation's crafts is a fair
index to the condition of its high arts;
for the crafts are the forerunners of the
arts, and the essential development of the latter
waits upon that of the former.
The artistic calibre of a people has been ascribed
too much to a vague fatality, or to an irresponsible
national tendency; men have been too ready to
accept Hellenic immortality as God-given, and as
unattainable by human effort, — forgetting that before
opportunity was ripe for the conception of such con-
summations as those of Praxiteles and Phidias the
fundamental idea of artistic fitness applied to utili-
tarian need was being fostered among Greek crafts
for many centuries, expressing itself ultimately in
that almost perfection of design typical of Greek
art, which we observe in each extant piece of Greek
workmanship how common and vulgar soever the
purpose of its utility.
To pass from the theory outlined above to prac-
tice in general, it may be remarked that the nation
starting with the idea that it may unfailingly achieve,
in due time and with due devotion of capacity to
the end in view, the height of Hellenic superiority
in the arts, will have taken the first step towards
preparing the soil for a fruitful harvest. Then let
the first efforts be devoted to propagating in the
mind of every worker the artistic idea of fitness,
applied as naturally in the making of the meanest
utensil as in the conception of the highest artistic
ccxcii

creation, and the seed will have been sown in the
soil under most auspicious conditions; for the law
that the standard achieved in the arts must be
derived from the standard maintained in the crafts
will have been recognized and obeyed.
So much for generality in practice and in theory.
Now, why should not America be a country consti-
tuting a field for the working out of the above
ideas? We believe that it undoubtedly is, for it
has a thousand advantages denied to other nations.
Its very newness makes it possible for this nation
to pick the fruits of the artistic experience of later
civilizations, while it remains untrammelled by an
older civilization's drawbacks. The manifold crafts
at the command of the various immigrants pouring
into this country should be fostered and turned
to good account. The ideas of these people,
infused with new enthusiasm derived from the
strength of this country, would, if carefully tended,
soon take root and result in the growth of national
crafts of a value quite beyond the possibility of
present conception.
With this sanguine and sincere belief in the future
of American crafts and arts, THE INTERNATIONAL
STUDio intends to add its mite of effort to the
general sum by drawing attention each month to
deserving specimens of workmanship from such
institutions as exist for the training of craftsmen, as


GUILD OF ARTS AND CRAFTS OF NEW YORK