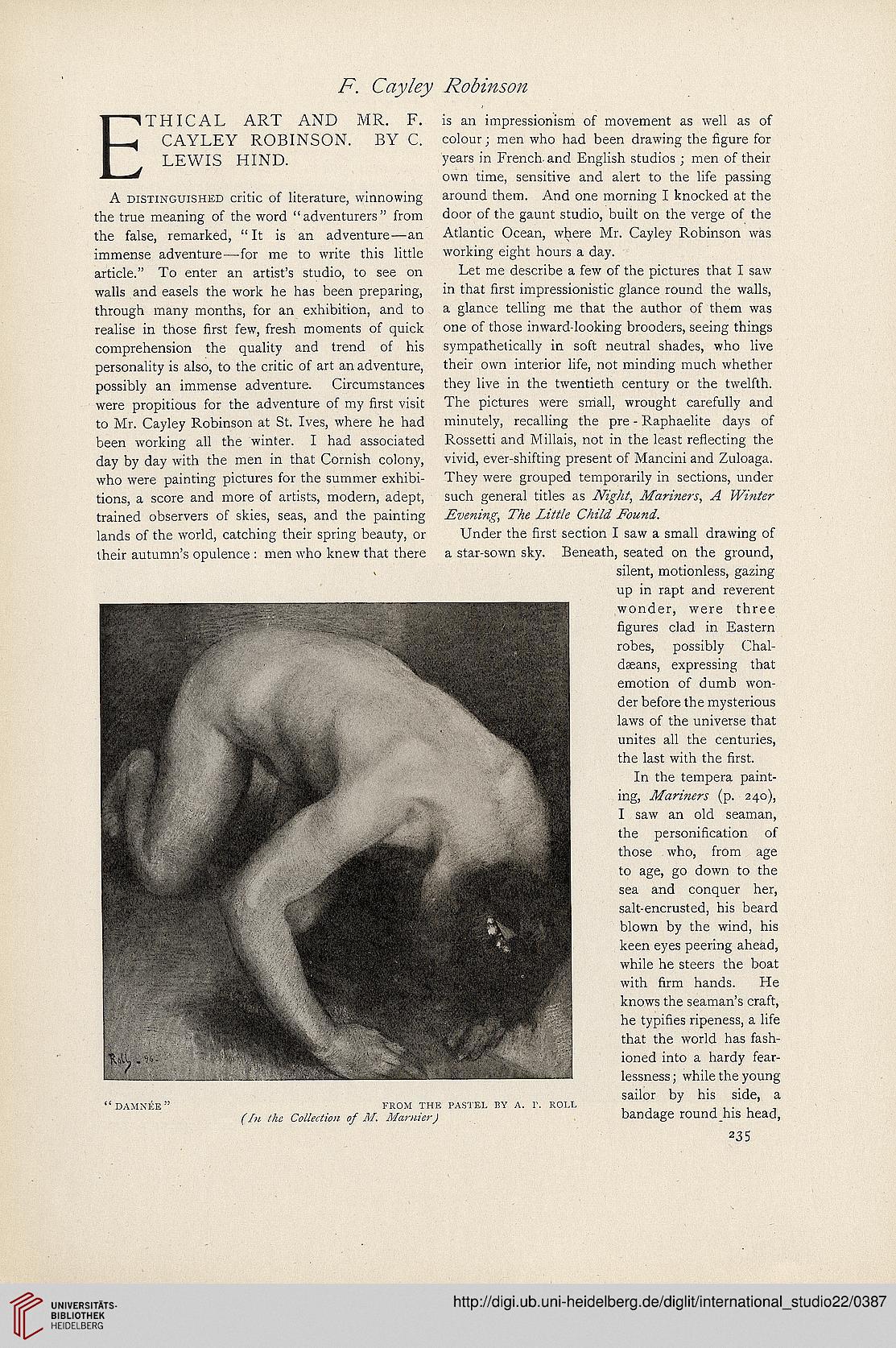 *H—1THICAL ART AND MR. F.
L-< CAYLEY ROBINSON. BY C.
LEWIS HIND.
A DISTINGUISHED critic of literature, winnowing
the true meaning of the word "adventurers" from
the false, remarked, "It is an adventure—an
immense adventure—for me to write this little
article." To enter an artist's studio, to see on
walls and easels the work he has been preparing,
through many months, for an exhibition, and to
realise in those first few, fresh moments of quick
comprehension the quality and trend of his
personality is also, to the critic of art an adventure,
possibly an immense adventure. Circumstances
were propitious for the adventure of my first visit
to Mr. Cayley Robinson at St. Ives, where he had
been working all the winter. I had associated
day by day with the men in that Cornish colony,
who were painting pictures for the summer exhibi-
tions, a score and more of artists, modern, adept,
trained observers of skies, seas, and the painting
lands of the world, catching their spring beauty, or
their autumn's opulence : men who knew that there

is an impressionism of movement as well as of
colour; men who had been drawing the figure for
years in French and English studios ; men of their
own time, sensitive and alert to the life passing
around them. And one morning I knocked at the
door of the gaunt studio, built on the verge of the
Atlantic Ocean, where Mr. Cayley Robinson was
working eight hours a day.
Let me describe a few of the pictures that I saw
in that first impressionistic glance round the walls,
a glance telling me that the author of them was
one of those inward-looking brooders, seeing things
sympathetically in soft neutral shades, who live
their own interior life, not minding much whether
they live in the twentieth century or the twelfth.
The pictures were small, wrought carefully and
minutely, recalling the pre - Raphaelite days of
Rossetti and Millais, not in the least reflecting the
vivid, ever-shifting present of Mancini and Zuloaga.
They were grouped temporarily in sections, under
such general titles as A%7%/,
CZz'/Z ZWTzZ
Under the first section I saw a small drawing of
a star-sown sky. Beneath, seated on the ground,
silent, motionless, gazing
up in rapt and reverent
wonder, were three
figures clad in. Eastern
robes, possibly Chal-
dseans, expressing that
emotion of dumb won-
der before the mysterious
laws of the universe that
unites all the centuries,
the last with the first.
In the tempera paint-
ing, (p. 240),
I saw an old seaman,
the personification of
those who, from age
to age, go down to the
sea and conquer her,
salt-encrusted, his beard
blown by the wind, his
keen eyes peering ahead,
while he steers the boat
with firm hands. He
knows the seaman's craft,
he typifies ripeness, a life
that the world has fash-
ioned into a hardy fear-
lessness ; while the young
sailor by his side, a
bandage round his head,
235