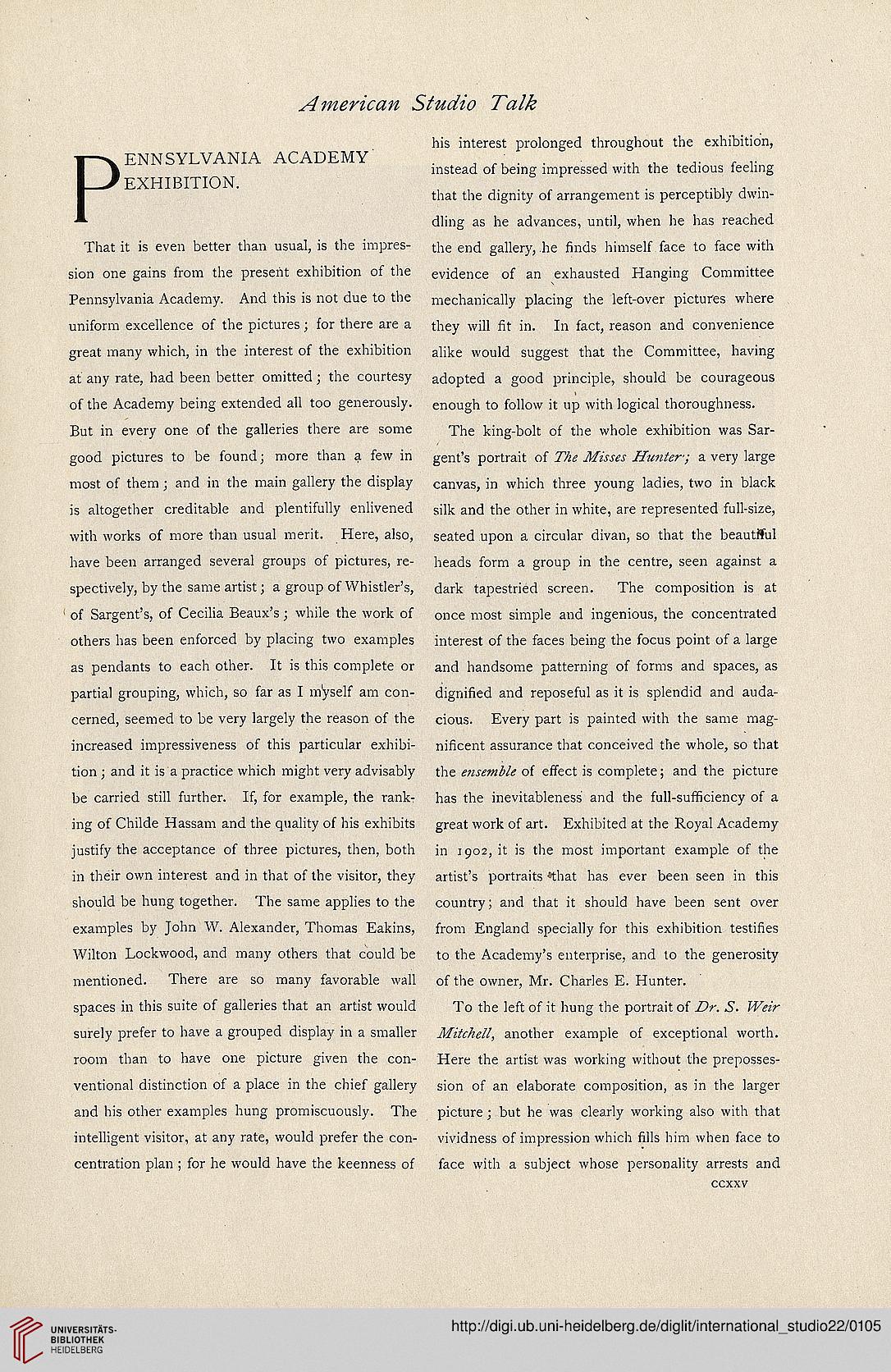 n—PENNSYLVANIA ACADEMY
L) EXHIBITION.
That it is even better than usual, is the impres-
sion one gains from the present exhibition of the
Pennsylvania Academy. And this is not due to the
uniform excellence of the pictures; for there are a
great many which, in the interest of the exhibition
at any rate, had been better omitted ; the courtesy
of the Academy being extended all too generously.
But in every one of the galleries there are some
good pictures to be found; more than a few in
most of them ; and in the main gallery the display
is altogether creditable and plentifully enlivened
with works of more than usual merit. Here, also,
have been arranged several groups of pictures, re-
spectively, by the same artist; a group of Whistler's,
of Sargent's, of Cecilia Beaux's ; while the work of
others has been enforced by placing two examples
as pendants to each other. It is this complete or
partial grouping, which, so far as I myself am con-
cerned, seemed to be very largely the reason of the
increased impressiveness of this particular exhibi-
tion ; and it is a practice which might very advisably
be carried still further. If, for example, the rank-
ing of Childe Hassam and the quality of his exhibits
justify the acceptance of three pictures, then, both
in their own interest and in that of the visitor, they
should be hung together. The same applies to the
examples by John W. Alexander, Thomas Eakins,
Wilton Lockwood, and many others that could be
mentioned. There are so many favorable wall
spaces in this suite of galleries that an artist would
surely prefer to have a grouped display in a smaller
room than to have one picture given the con-
ventional distinction of a place in the chief gallery
and his other examples hung promiscuously. The
intelligent visitor, at any rate, would prefer the con-
centration plan ; for he would have the keenness of

his interest prolonged throughout the exhibition,
instead of being impressed with the tedious feeling
that the dignity of arrangement is perceptibly dwin-
dling as he advances, until, when he has reached
the end gallery, he finds himself face to face with
evidence of an exhausted Hanging Committee
mechanically placing the left-over pictures where
they will fit in. In fact, reason and convenience
alike would suggest that the Committee, having
adopted a good principle, should be courageous
enough to follow it up with logical thoroughness.
The king-bolt of the whole exhibition was Sar-
gent's portrait of 77L A/Aw a very large
canvas, in which three young ladies, two in black
silk and the other in white, are represented full-size,
seated upon a circular divan, so that the beautiful
heads form a group in the centre, seen against a
dark tapestried screen. The composition is at
once most simple and ingenious, the concentrated
interest of the faces being the focus point of a large
and handsome patterning of forms and spaces, as
dignified and reposeful as it is splendid and auda-
cious. Every part is painted with the same mag-
nificent assurance that conceived the whole, so that
the of effect is complete; and the picture
has the inevitableness and the full-sufficiency of a
great work of art. Exhibited at the Royal Academy
in j$o2, it is the most important example of the
artist's portraits ^that has ever been seen in this
country; and that it should have been sent over
from England specially for this exhibition testifies
to the Academy's enterprise, and to the generosity
of the owner, Mr. Charles E. Hunter.
To the left of it hung the portrait of Dr. .S'. HYfr
AAYz^<?7/, another example of exceptional worth.
Here the artist was working without the preposses-
sion of an elaborate composition, as in the larger
picture ; but he was clearly working also with that
vividness of impression which fills him when face to
face with a subject whose personality arrests and