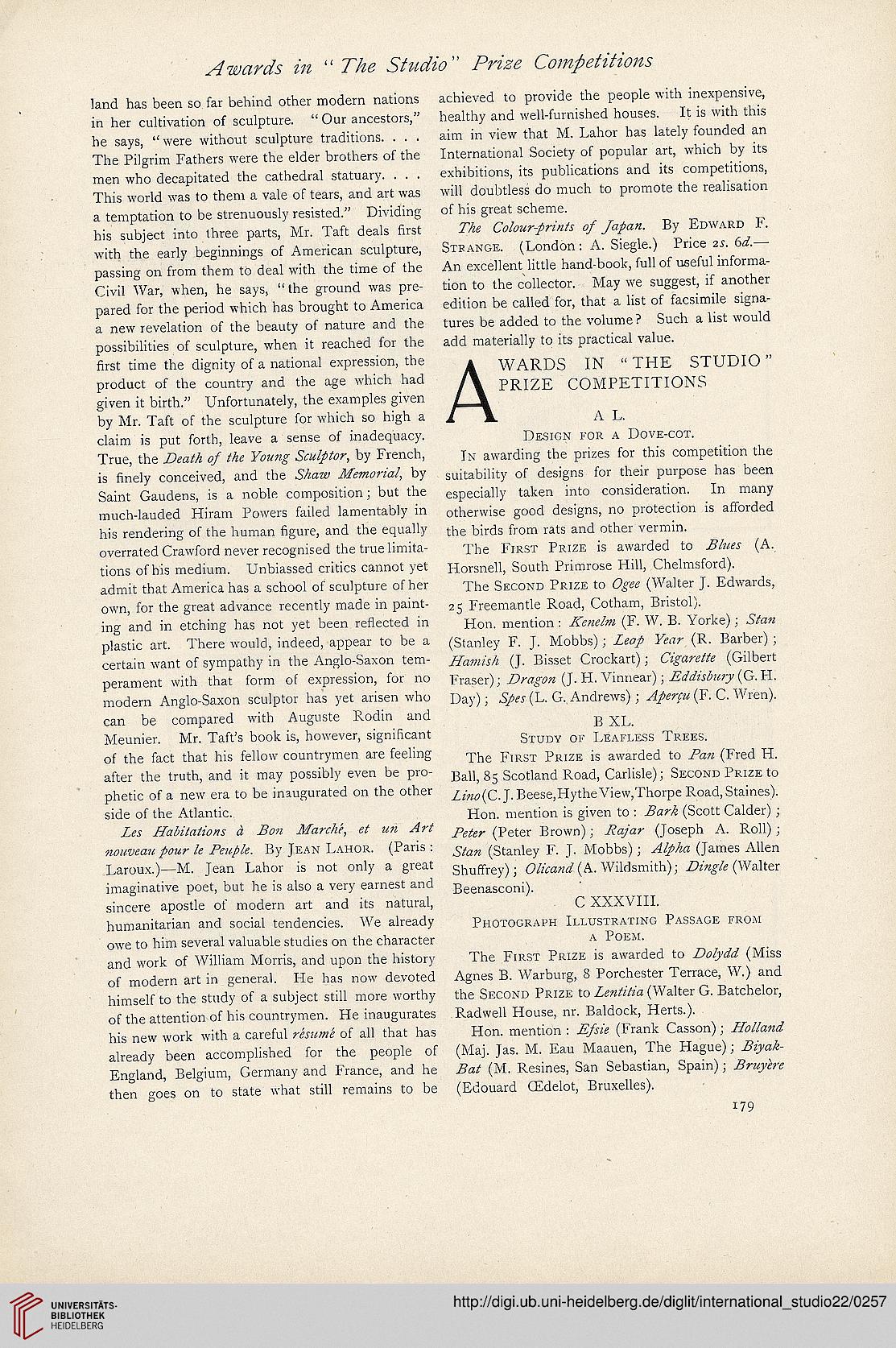 land has been so far behind other modern nations
in her cultivation of sculpture. " Our ancestors,"
he says, "were without sculpture traditions. . . .
The Pilgrim Fathers were the elder brothers of the
men who decapitated the cathedral statuary. . . .
This world was to them a vale of tears, and art was
a temptation to be strenuously resisted." Dividing
his subject into three parts, Mr. Taft deals first
with the early beginnings of American sculpture,
passing on from them to deal with the time of the
Civil War, when, he says, " the ground was pre-
pared for the period which has brought to America
a new revelation of the beauty of nature and the
possibilities of sculpture, when it reached for the
first time the dignity of a national expression, the
product of the country and the age which had
given it birth." Unfortunately, the examples given
by Mr. Taft of the sculpture for which so high a
claim is put forth, leave a sense of inadequacy.
True, the ^ by French,
is finely conceived, and the T3i?77M7*2'a/, by
Saint Gaudens, is a noble composition; but the
much-lauded Hiram Powers failed lamentably in
his rendering of the human figure, and the equally
overrated Crawford never recognised the true limita-
tions of his medium. Unbiassed critics cannot yet
admit that America has a school of sculpture of her
own, for the great advance recently made in paint-
ing and in etching has not yet been reflected in
plastic art. There would, indeed, appear to be a
certain want of sympathy in the Anglo-Saxon tem-
perament with that form of expression, for no
modern Anglo-Saxon sculptor has yet arisen who
can be compared with Auguste Rodin and
Meunier. Mr. Taft's book is, however, significant
of the fact that his fellow countrymen are feeling
after the truth, and it may possibly even be pro-
phetic of a new era to be inaugurated on the other
side of the Atlantic.
ZMf/n/ziw ^ <?7 ^7*3
7MMM;a77 ^ By JEAN LAHOR. (Paris :
Laroux.)—M. Jean Lahor is not only a great
imaginative poet, but he is also a very earnest and
sincere apostle of modern art and its natural,
humanitarian and social tendencies. We already
owe to him several valuable studies on the character
and work of William Morris, and upon the history
of modern art in general. He has now devoted
himself to the study of a subject still more worthy
of the attention of his countrymen. He inaugurates
his new work with a careful 7W777?<? of all that has
already been accomplished for the people of
England, Belgium, Germany and France, and he
then goes on to state what still remains to be

achieved to provide the people with inexpensive,
healthy and well-furnished houses. It is with this
aim in view that M. Lahor has lately founded an
International Society of popular art, which by its
exhibitions, its publications and its competitions,
will doubtless do much to promote the realisation
of his great scheme.
LhZ?777'^7'7773!' ^ y^(Z72. By EDWARD F.
STRANGE. (London: A. Siegle.) Price 2r. 6Z—
An excellent little hand-book, full of useful informa-
tion to the collector. May we suggest, if another
edition be called for, that a list of facsimile signa-
tures be added to the volume ? Such a list would
add materially to its practical value.
WARDS IN "THE STUDIO"
PRIZE COMPETITIONS
A L.
DESIGN FOR A DOVE-COT.
IN awarding the prizes for this competition the
suitability of designs for their purpose has been
especially taken into consideration. In many
otherwise good designs, no protection is afforded
the birds from rats and other vermin.
The FiRST PRIZE is awarded to (A.
Horsnell, South Primrose Hill, Chelmsford).
The SECOND PRIZE to (Walter J. Edwards,
25 Freemantle Road, Gotham, Bristol).
Hon. mention : ALw3772 (F. W. B. Yorke);
(Stanley F. J. Mobbs); Zg<7/5 Hw (R. Barber) ;
jyi?772A/% (J. Bisset Crockart); C^a7*g33<; (Gilbert
Fraser); Wagwz (J. H. Vinnear); Az3Zk^227y (G. FI.
Day); (L. G. Andrews); ^4/^7y?<! (F. C. Wren).
B XL.
STUDY OF LEAFLESS TREES.
The FiRST PRIZE is awarded to Aaz; (Fred H.
Ball, 85 Scotland Road, Carlisle); SECOND PRIZE to
Z?*7M(C. J. Beese,Hythe View,Thorpe Road, Staines).
Hon. mention is given to : ,Z?n7-/§ (Scott Calder);
A3C7- (Peter Brown); Wo/a7- (Joseph A. Roll) ;
X3a7z (Stanley F. J. Mobbs); (James Allen
Shuffrey); C/ziwzd! (A. Wildsmith); Zk'TzjZ? (Walter
Beenasconi).
C XXXVIII.
PHOTOGRAPH ILLUSTRATING PASSAGE FROM
A POEM.
The FiRST PRIZE is awarded to ZU3yz%3 (Miss
Agnes B. Warburg, 8 Porchester Terrace, W.) and
the SECOND PRIZE to Z<?7z3/3M (Walter G. Batchelor,
Radwell House, nr. Baldock, Herts.).
Hon. mention : (Frank Casson);
(Maj. Jas. M. Eau Maauen, The Hague); ZzJaZ-
(M. Resines, San Sebastian, Spain); Z7-7ci^7*z;
(Edouard (Edelot, Bruxelles).