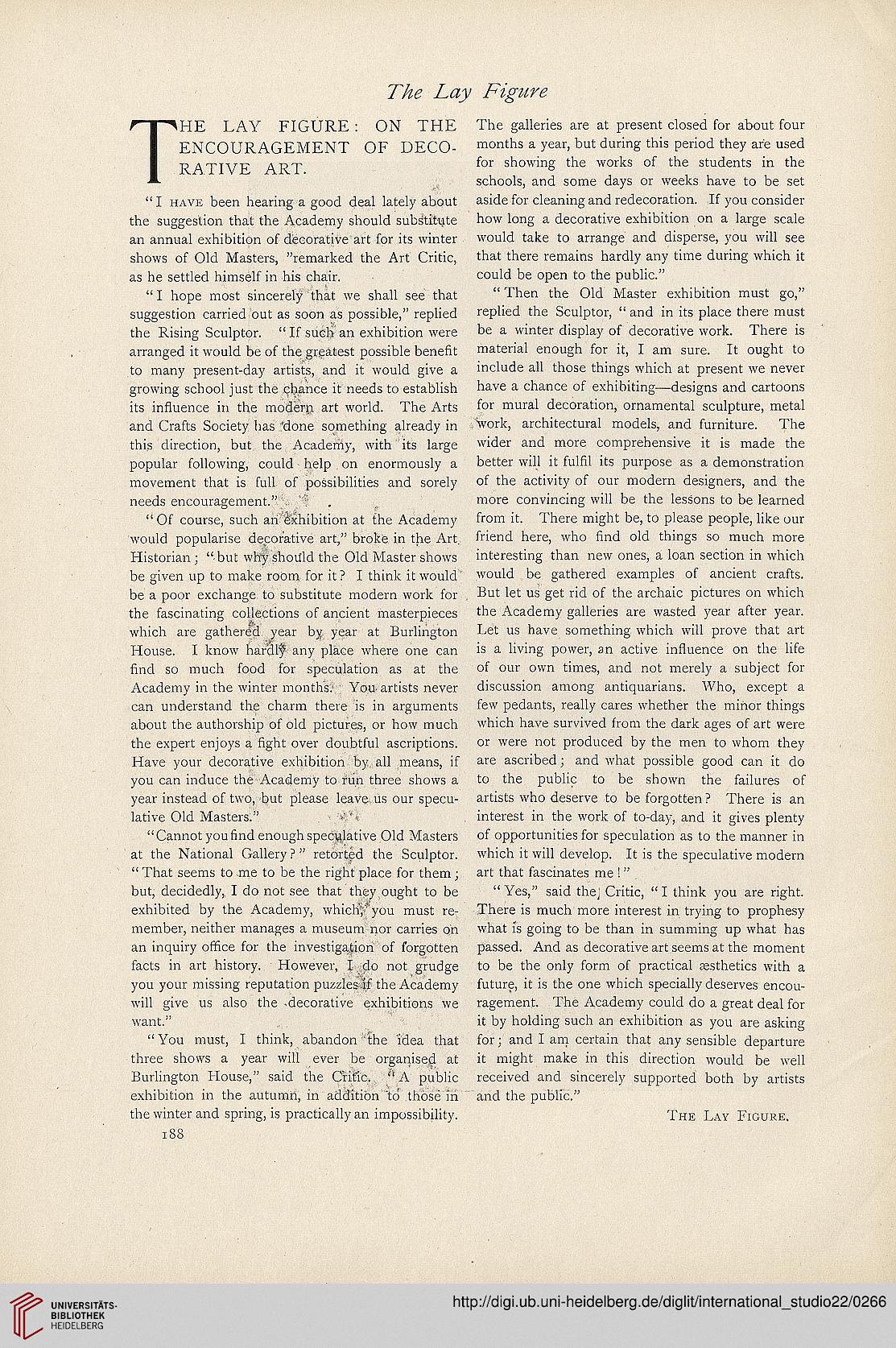 r-TT^HE LAY FIGURE: ON THE
ENCOURAGEMENT OF DECO-
A RATIVE ART.
" I HAVE been hearing a good deal lately about
the suggestion that the Academy should substitute
an annual exhibition of decorative art for its winter
shows of Old Masters, "remarked the Art Critic,
as he settled himself in his chair.
" I hope most sincerely that we shall see that
suggestion carried out as soon as possible," replied
the Rising Sculptor. "If such an exhibition were
arranged it would be of the greatest possible benefit
to many present-day artists, and it would give a
growing school just the chance it needs to establish
its influence in the moderp art world. The Arts
and Crafts Society has done something already in
this direction, but the Academy, with its large
popular following, could help on enormously a
movement that is full of possibilities and sorely
needs encouragement."
"Of course, such an exhibition at the Academy
would popularise decorative art," broke in the Art
Historian ; " but why should the Old Master shows
be given up to make room for it ? I think it would
be a poor exchange to substitute modern work for
the fascinating collections of ancient masterpieces
which are gathered year by year at Burlington
House. I know hardlji any place where one can
find so much food for speculation as at the
Academy in the winter months. You artists never
can understand the charm there is in arguments
about the authorship of old pictures, or how much
the expert enjoys a hght over doubtful ascriptions.
Have your decorative exhibition by all means, if
you can induce the Academy to run three shows a
year instead of two, but please leave us our specu-
lative Old Masters."
"Cannot you find enough speculative Old Masters
at the National Gallery ?" retorted the Sculptor.
" That seems to me to be the right place for them ;
but, decidedly,. I do not see that they ought to be
exhibited by the Academy, which, you must re-
member, neither manages a museum nor carries on
an inquiry office for the investigation of forgotten
facts in art history. However, I do not grudge
you your missing reputation puzzles if the Academy
will give us also the decorative exhibitions we
want."
"You must, I think, abandon the idea that
three shows a year will ever be organised at
Burlington House," said the Critic. "A public
exhibition in the autumn, in addition to those in
the winter and spring, is practically an impossibility.

The galleries are at present closed for about four
months a year, but during this period they are used
for showing the works of the students in the
schools, and some days or weeks have to be set
aside for cleaning and redecoration. If you consider
how long a decorative exhibition on a large scale
would take to arrange and disperse, you will see
that there remains hardly any time during which it
could be open to the public."
" Then the Old Master exhibition must go,"
replied the Sculptor, " and in its place there must
be a winter display of decorative work. There is
material enough for it, I am sure. It ought to
include all those things which at present we never
have a chance of exhibiting—designs and cartoons
for mural decoration, ornamental sculpture, metal
work, architectural models, and furniture. The
wider and more comprehensive it is made the
better will it fulfil its purpose as a demonstration
of the activity of our modern designers, and the
more convincing will be the lessons to be learned
from it. There might be, to please people, like our
friend here, who find old things so much more
interesting than new ones, a loan section in which
would be gathered examples of ancient crafts.
But let us get rid of the archaic pictures on which
the Academy galleries are wasted year after year.
Let us have something which will prove that art
is a living power, an active influence on the life
of our own times, and not merely a subject for
discussion among antiquarians. Who, except a
few pedants, really cares whether the minor things
which have survived from the dark ages of art were
or were not produced by the men to whom they
are ascribed; and what possible good can it do
to the public to be shown the failures of
artists who deserve to be forgotten ? There is an
interest in the work of to-day, and it gives plenty
of opportunities for speculation as to the manner in
which it will develop. It is the speculative modern
art that fascinates me ! "
" Yes," said thej Critic, " I think you are right.
There is much more interest in trying to prophesy
what is going to be than in summing up what has
passed. And as decorative art seems at the moment
to be the only form of practical aesthetics with a
future, it is the one which specially deserves encou-
ragement. The Academy could do a great deal for
it by holding such an exhibition as you are asking
for; and I am certain that any sensible departure
it might make in this direction would be well
received and sincerely supported both by artists
and the public."
THE LAY FIGURE.