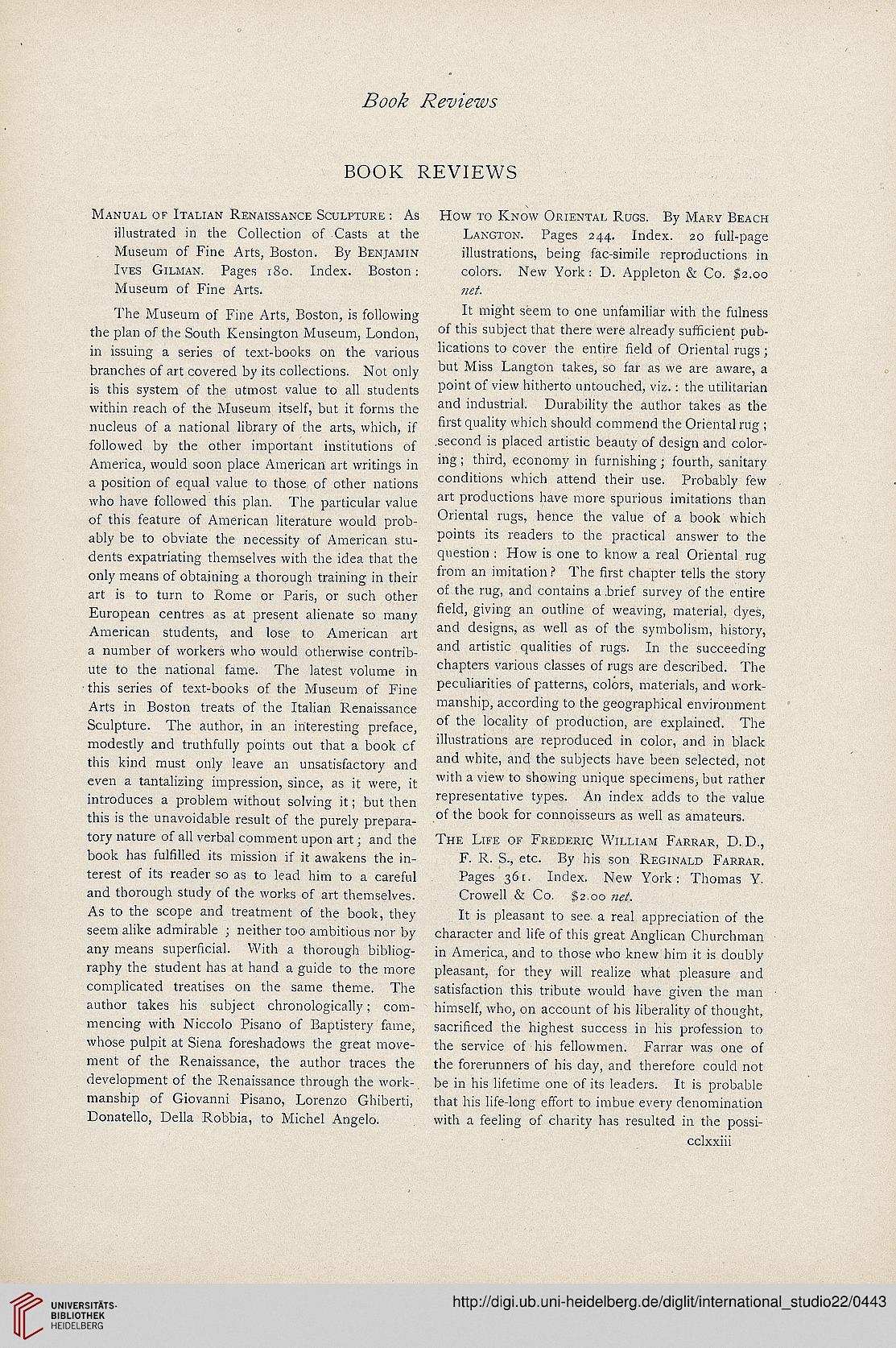 MANUAL OF ITALIAN RENAISSANCE SCULPTURE : As
illustrated in the CoHection of Casts at the
Museum of Fine Arts, Boston. By BENJAMIN
IvES GiLMAN. Pages 180. Index. Boston:
Museum of Fine Arts.
The Museum of Fine Arts, Boston, is following
the plan of the South Kensington Museum, London,
in issuing a series of text-books on the various
branches of art covered by its collections. Not only
is this system of the utmost value to all students
within reach of the Museum itself, but it forms the
nucleus of a national library of the arts, which, if
followed by the other important institutions of
America, would soon place American art writings in
a position of equal value to those of other nations
who have followed this plan. The particular value
of this feature of American literature would prob-
ably be to obviate the necessity of American stu-
dents expatriating themselves with the idea that the
only means of obtaining a thorough training in their
art is to turn to Rome or Paris, or such other
European centres as at present alienate so many
American students, and lose to American art
a number of workers who would otherwise contrib-
ute to the national fame. The latest volume in
this series of text-books of the Museum of Fine
Arts in Boston treats of the Italian Renaissance
Sculpture. The author, in an interesting preface,
modestly and truthfully points out that a book cf
this kind must only leave an unsatisfactory and
even a tantalizing impression, since, as it were, it
introduces a problem without solving it; but then
this is the unavoidable result of the purely prepara-
tory nature of all verbal comment upon art; and the
book has fulfilled its mission if it awakens the in-
terest of its reader so as to lead him to a careful
and thorough study of the works of art themselves.
As to the scope and treatment of the book, they
seem alike admirable ; neither too ambitious nor by
any means superficial. With a thorough bibliog-
raphy the student has at hand a guide to the more
complicated treatises on the same theme. The
author takes his subject chronologically; com-
mencing with Niccolo Pisano of Baptistery fame,
whose pulpit at Siena foreshadows the great move-
ment of the Renaissance, the author traces the
development of the Renaissance through the work-
manship of Giovanni Pisano, Lorenzo Ghiberti,
Donatello, Della Robbia, to Michel Angelo.

How TO KNOW ORIENTAL RUGS. By MARY BEACH
L.ANGTON. Pages 244. Index. 20 full-page
illustrations, being fac-simile reproductions in
colors. New York: D. Appleton & Co. %2.oo
It might seem to one unfamiliar with the fulness
of this subject that there were already sufficient pub-
lications to cover the entire field of Oriental rugs;
but Miss Langton takes, so far as we are aware, a
point of view hitherto untouched, viz.: the utilitarian
and industrial. Durability the author takes as the
first quality which should commend the Oriental rug ;
second is placed artistic beauty of design and color-
ing ; third, economy in furnishing; fourth, sanitary
conditions which attend their use. Probably few
art productions have more spurious imitations than
Oriental rugs, hence the value of a book which
points its readers to the practical answer to the
question : How is one to know a real Oriental rug
from an imitation ? The first chapter tells the story
of the rug, and contains a brief survey of the entire
field, giving an outline of weaving, material, dyes,
and designs, as well as of the symbolism, history,
and artistic qualities of rugs. In the succeeding
chapters various classes of rugs are described. The
peculiarities of patterns, colors, materials, and work-
manship, according to the geographical environment
of the locality of production, are explained. The
illustrations are reproduced in color, and in black
and white, and the subjects have been selected, not
with a view to showing unique specimens, but rather
representative types. An index adds to the value
of the book for connoisseurs as well as amateurs.
THE LIFE OF FREDERIC WILLIAM FARRAR, D. D.,
F. R. S., etc. By his son REGINALD FARRAR.
Pages 361. Index. New York: Thomas Y.
Crowell & Co. ^2.00 72<?r.
It is pleasant to see a real appreciation of the
character and life of this great Anglican Churchman
in America, and to those who knew him it is doubly
pleasant, for they will realize what pleasure and
satisfaction this tribute would have given the man
himself, who, on account of his liberality of thought,
sacrificed the highest success in his profession to
the service of his fellowmen. Farrar was one of
the forerunners of his day, and therefore could not
be in his lifetime one of its leaders. It is probable
that his life-long effort to imbue every denomination
with a feeling of charity has resulted in the possi-
cclxxiii