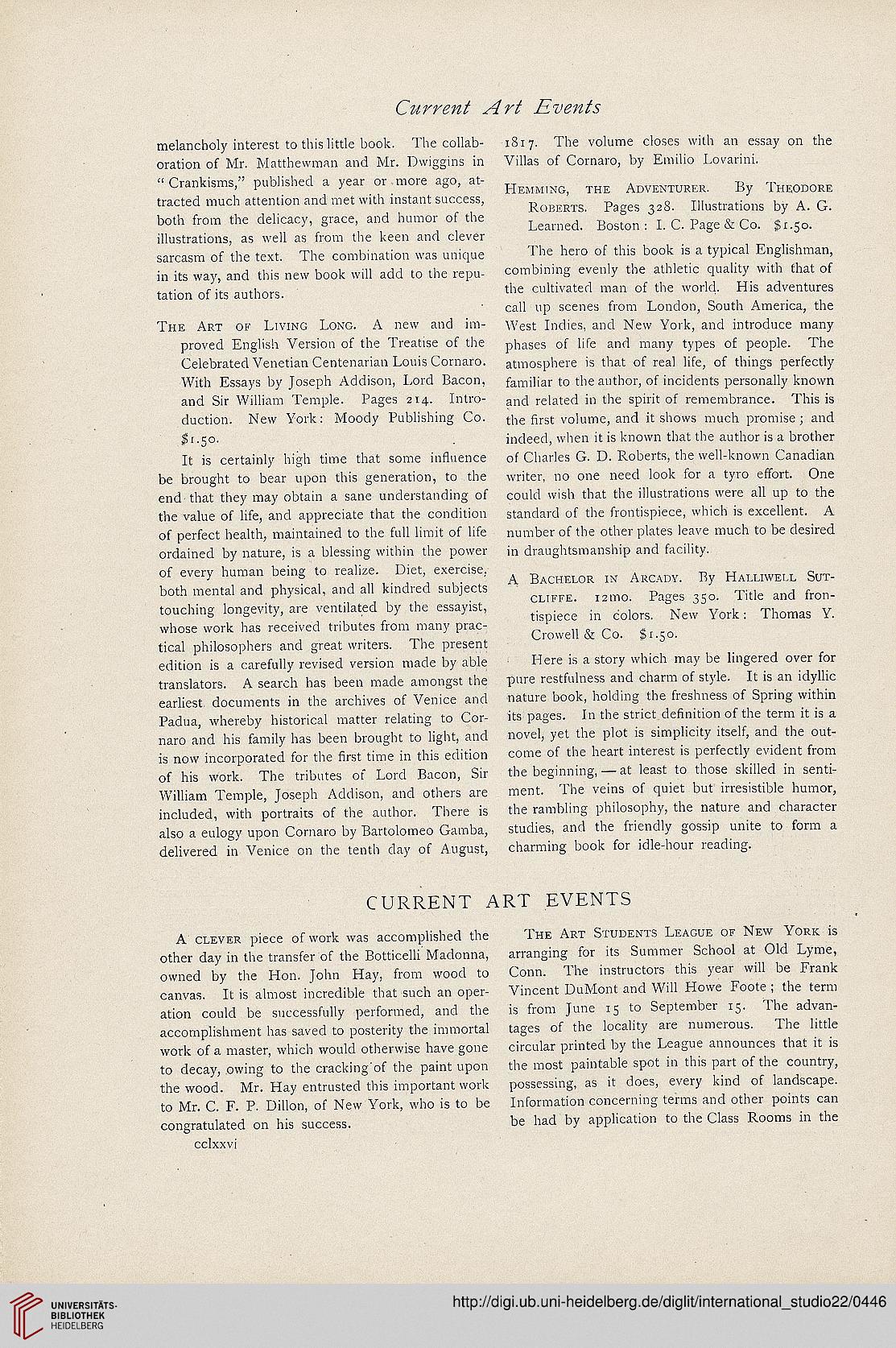 melancholy interest to this little book. The collab-
oration of Mr. Mntthewman and Mr. Dwiggins in
" Crankisms," pubiished a year or more ago, at-
tracted much attention and met with instant success,
both from the delicacy, grace, and humor of the
illustrations, as well as from the keen and clever
sarcasm of the text. The combination was unique
in its way, and this new book will add to the repu-
tation of its authors.
THE ART OF LiviNG LONG. A new and im-
proved English Version of the Treatise of the
Celebrated Venetian Centenarian Louis Cornaro.
With Essays by Joseph Addison, Lord Bacon,
and Sir William Temple. Pages 214. Intro-
duction. New York: Moody Publishing Co.
%'-go.
It is certainly high time that some influence
be brought to bear upon this generation, to the
end that they may obtain a sane understanding of
the value of life, and appreciate that the condition
of perfect health, maintained to the full limit of life
ordained by nature, is a blessing within the power
of every human being to realize. Diet, exercise,
both mental and physical, and all kindred subjects
touching longevity, are ventilated by the essayist,
whose work has received tributes from many prac-
tical philosophers and great writers. The present
edition is a carefully revised version made by able
translators. A search has been made amongst the
earliest documents in the archives of Venice and
Padua, whereby historical matter relating to Cor-
naro and his family has been brought to light, and
is now incorporated for the first time in this edition
of his work. The tributes of Lord Bacon, Sir
William Temple, Joseph Addison, and others are
included, with portraits of the author. There is
also a eulogy upon Cornaro by Bartolomeo Gamba,
delivered in Venice on the tenth day of August,

1817. The volume closes with an essay on the
Villas of Cornaro, by Emilio Lovarini.
HEMMING, THE ADVENTURER. By THEODORE
ROBERTS. Pages 328. Illustrations by A. G.
Learned. Boston: I. C. Page&Co. jgr.go.
The hero of this book is a typical Englishman,
combining evenly the athletic quality with that of
the cultivated man of the world. His adventures
call up scenes from London, South America, the
West Indies, and New York, and introduce many
phases of life and many types of people. The
atmosphere is that of real life, of things perfectly
familiar to the author, of incidents personally known
and related in the spirit of remembrance. This is
the first volume, and it shows much promise; and
indeed, when it is known that the author is a brother
of Charles G. D. Roberts, the well-known Canadian
writer, no one need look for a tyro effort. One
could wish that the illustrations were all up to the
standard of the frontispiece, which is excellent. A
number of the other plates leave much to be desired
in draughtsmanship and facility.
A BACHELOR IN ARCADY. By HALLIWELL SUT-
CLIFFE. 121110. Pages ggo. Title and fron-
tispiece in colors. New York: Thomas Y.
Crowell & Co. $1.50.
Here is a story which may be lingered over for
pure restfulness and charm of style. It is an idyllic
nature book, holding the freshness of Spring within
its pages. In the strict definition of the term it is a
novel, yet the plot is simplicity itself, and the out-
come of the heart interest is perfectly evident from
the beginning, — at least to those skilled in senti-
ment. The veins of quiet but irresistible humor,
the rambling philosophy, the nature and character
studies, and the friendly gossip unite to form a
charming book for idle-hour reading.

A CLEVER piece of work was accomplished the
other day in the transfer of the Botticelli Madonna,
owned by the Hon. John Hay, from wood to
canvas. It is almost incredible that such an oper-
ation could be successfully performed, and the
accomplishment has saved to posterity the immortal
work of a master, which would otherwise have gone
to decay, owing to the cracking of the paint upon
the wood. Mr. Hay entrusted this important work
to Mr. C. F. P. Dillon, of New York, who is to be
congratulated on his success,
cclxxvi

THE ART STUDENTS LEAGUE OF NEW YORK is
arranging for its Summer School at Old Lyme,
Conn. The instructors this year will be Frank
Vincent DuMont and Will Howe Foote ; the term
is from June 15 to September ig. The advan-
tages of the locality are numerous. The little
circular printed by the League announces that it is
the most paintable spot in this part of the country,
possessing, as it does, every kind of landscape.
Information concerning terms and other points can
be had by application to the Class Rooms in the