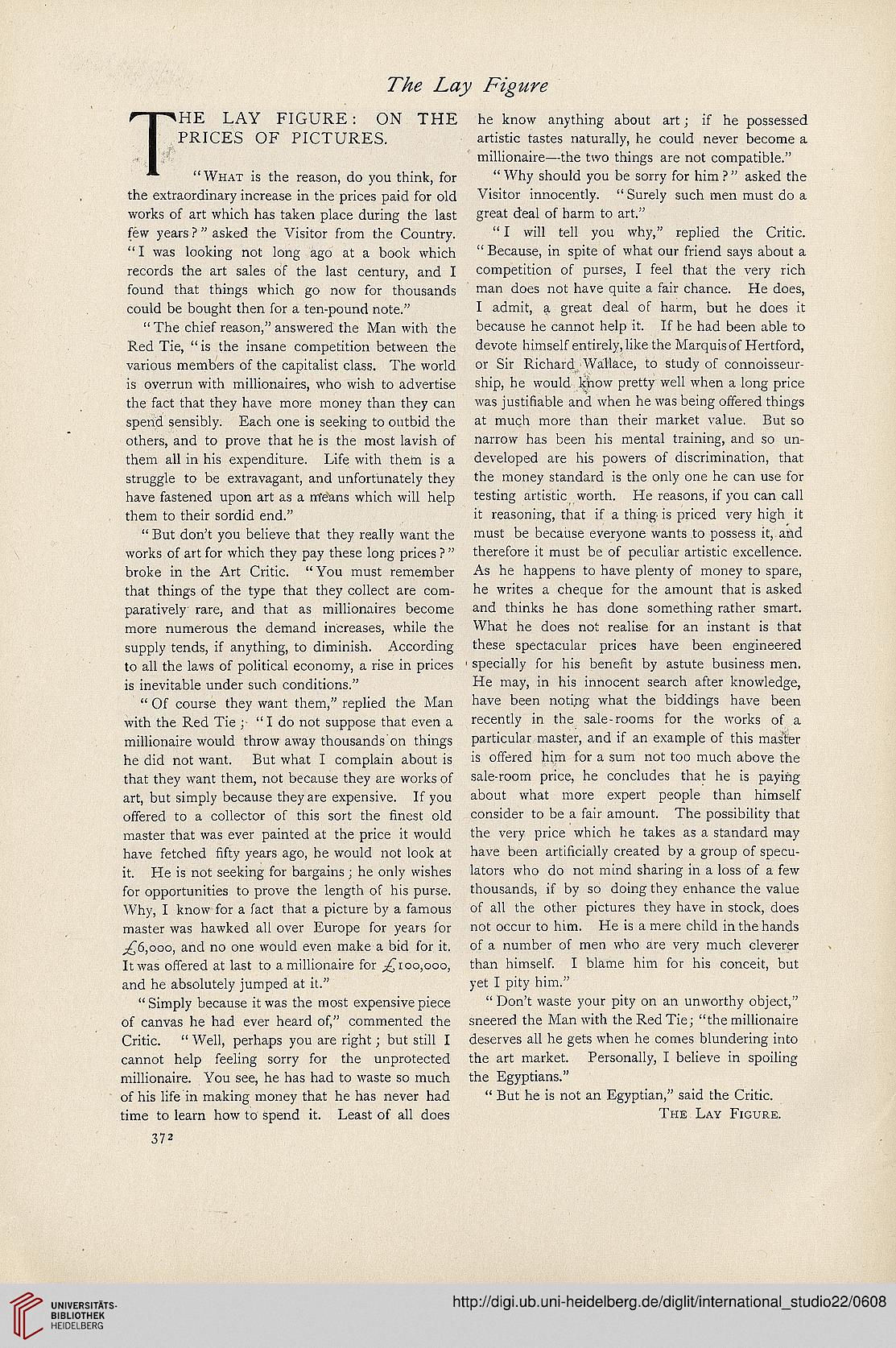 HE LAY FIGURE: ON THE
PRICES OF PICTURES.

"WHAT is the reason, do you think, for
the extraordinary increase in the prices paid for old
works of art which has taken place during the last
few years ? " asked the Visitor from the Country.
"I was looking not long ago at a book which
records the art sales of the last century, and I
found that things which go now for thousands
could be bought then for a ten-pound note."
" The chief reason," answered the Man with the
Red Tie, " is the insane competition between the
various members of the capitalist class. The world
is overrun with millionaires, who wish to advertise
the fact that they have more money than they can
spend sensibly. Each one is seeking to outbid the
others, and to prove that he is the most lavish of
them all in his expenditure. Life with them is a
struggle to be extravagant, and unfortunately they
have fastened upon art as a m'eans which will help
them to their sordid end."
" But don't you believe that they really want the
works of art for which they pay these long prices ? "
broke in the Art Critic. " You must remember
that things of the type that they collect are com-
paratively rare, and that as millionaires become
more numerous the demand increases, while the
supply tends, if anything, to diminish. According
to all the laws of political economy, a rise in prices
is inevitable under such conditions."
" Of course they want them," replied the Man
with the Red Tie ; " I do not suppose that even a
millionaire would throw away thousands on things
he did not want. But what I complain about is
that they want them, not because they are works of
art, but simply because they are expensive. If you
offered to a collector of this sort the finest old
master that was ever painted at the price it would
have fetched fifty years ago, he would not look at
it. He is not seeking for bargains; he only wishes
for opportunities to prove the length of his purse.
Why, I know for a fact that a picture by a famous
master was hawked all over Europe for years for
^6,000, and no one would even make a bid for it.
It was offered at last to a millionaire for ^ioo,ooo,
and he absolutely jumped at it."
" Simply because it was the most expensive piece
of canvas he had ever heard of," commented the
Critic. " Well, perhaps you are right; but still I
cannot help feeling sorry for the unprotected
millionaire. You see, he has had to waste so much
of his life in making money that he has never had
time to learn how to spend it. Least of all does
372

he know anything about art; if he possessed
artistic tastes naturally, he could never become a
millionaire—the two things are not compatible."
" Why should you be sorry for him ? " asked the
Visitor innocently. " Surely such men must do a
great deal of harm to art."
" I will tell you why," replied the Critic.
" Because, in spite of what our friend says about a
competition of purses, I feel that the very rich
man does not have quite a fair chance. He does,
I admit, a great deal of harm, but he does it
because he cannot help it. If he had been able to
devote himself entirely, like the Marquis of Hertford,
or Sir Richard Wallace, to study of connoisseur-
ship, he would know pretty well when a long price
was justifiable and when he was being offered things
at much more than their market value. But so
narrow has been his mental training, and so un-
developed are his powers of discrimination, that
the money standard is the only one he can use for
testing artistic worth. He reasons, if you can call
it reasoning, that if a thing is priced very high it
must be because everyone wants to possess it, and
therefore it must be of peculiar artistic excellence.
As he happens to have plenty of money to spare,
he writes a cheque for the amount that is asked
and thinks he has done something rather smart.
What he does not realise for an instant is that
these spectacular prices have been engineered
specially for his benefit by astute business men.
He may, in his innocent search after knowledge,
have been noting what the biddings have been
recently in the sale-rooms for the works of a
particular master, and if an example of this master
is offered him for a sum not too much above the
sale-room price, he concludes that he is paying
about what more expert people than himself
consider to be a fair amount. The possibility that
the very price which he takes as a standard may
have been artificially created by a group of specu-
lators who do not mind sharing in a loss of a few
thousands, if by so doing they enhance the value
of all the other pictures they have in stock, does
not occur to him. He is a mere child in the hands
of a number of men who are very much cleverer
than himself. I blame him for his conceit, but
yet I pity him."
" Don't waste your pity on an unworthy object,"
sneered the Man with the Red Tie; "the millionaire
deserves all he gets when he comes blundering into
the art market. Personally, I believe in spoiling
the Egyptians."
" But he is not an Egyptian," said the Critic.
THE LAY FIGURE.