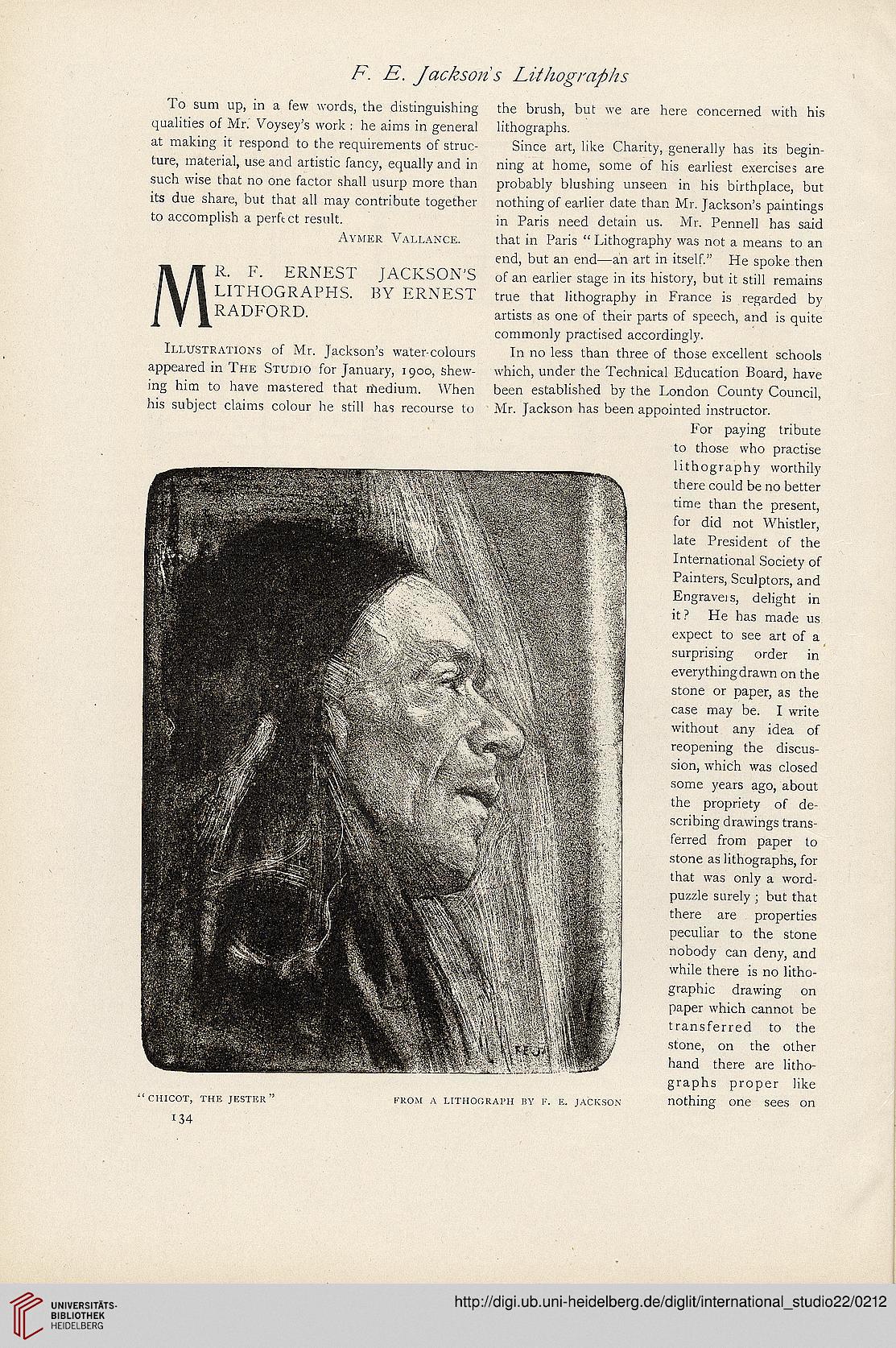 To sum up, in a few words, the distinguishing
qualities of Mr. Voysey's work : he aims in general
at making it respond to the requirements of struc-
ture, material, use and artistic fancy, equally and in
such wise that no one factor shall usurp more than
its due share, but that all may contribute together
to accomplish a perftct result.
AYMER VALLANCE.
/T R. F. ERNEST JACKSON'S
LITHOGRAPHS. BY ERNEST
! V H RADFORD.
ILLUSTRATIONS of Mr. Jackson's water-colours
appeared in THE STUDIO for January, 1900, shew-
ing him to have mastered that medium. When
his subject claims colour he still has recourse to

the brush, but we are here concerned with his
lithographs.
Since art, like Charity, generally has its begin-
ning at home, some of his earliest exercises are
probably blushing unseen in his birthplace, but
nothing of earlier date than Mr. Jackson's paintings
in Paris need detain us. Mr. Pennell has said
that in Paris " Lithography was not a means to an
end, but an end—an art in itself." He spoke then
of an earlier stage in its history, but it still remains
true that lithography in France is regarded by
artists as one of their parts of speech, and is quite
commonly practised accordingly.
In no less than three of those excellent schools
which, under the Technical Education Board, have
been established by the London County Council,
Mr. Jackson has been appointed instructor.
For paying tribute
to those who practise
lithography worthily
there could be no better
time than the present,
for did not Whistler,
late President of the
International Society of
Painters, Sculptors, and
Engrave! s, delight in
it? He has made us
expect to see art of a
surprising order in
everythingdrawn on the
stone or paper, as the
case may be. I write
without any idea of
reopening the discus-
sion, which was closed
some years ago, about
the propriety of de-
scribing drawings trans-
ferred from paper to
stone as lithographs, for
that was only a word-
puzzle surely ; but that
there are properties
peculiar to the stone
nobody can deny, and
while there is no litho-
graphic drawing on
paper which cannot be
transferred to the
stone, on the other
hand there are litho-
graphs proper like
nothing one sees on