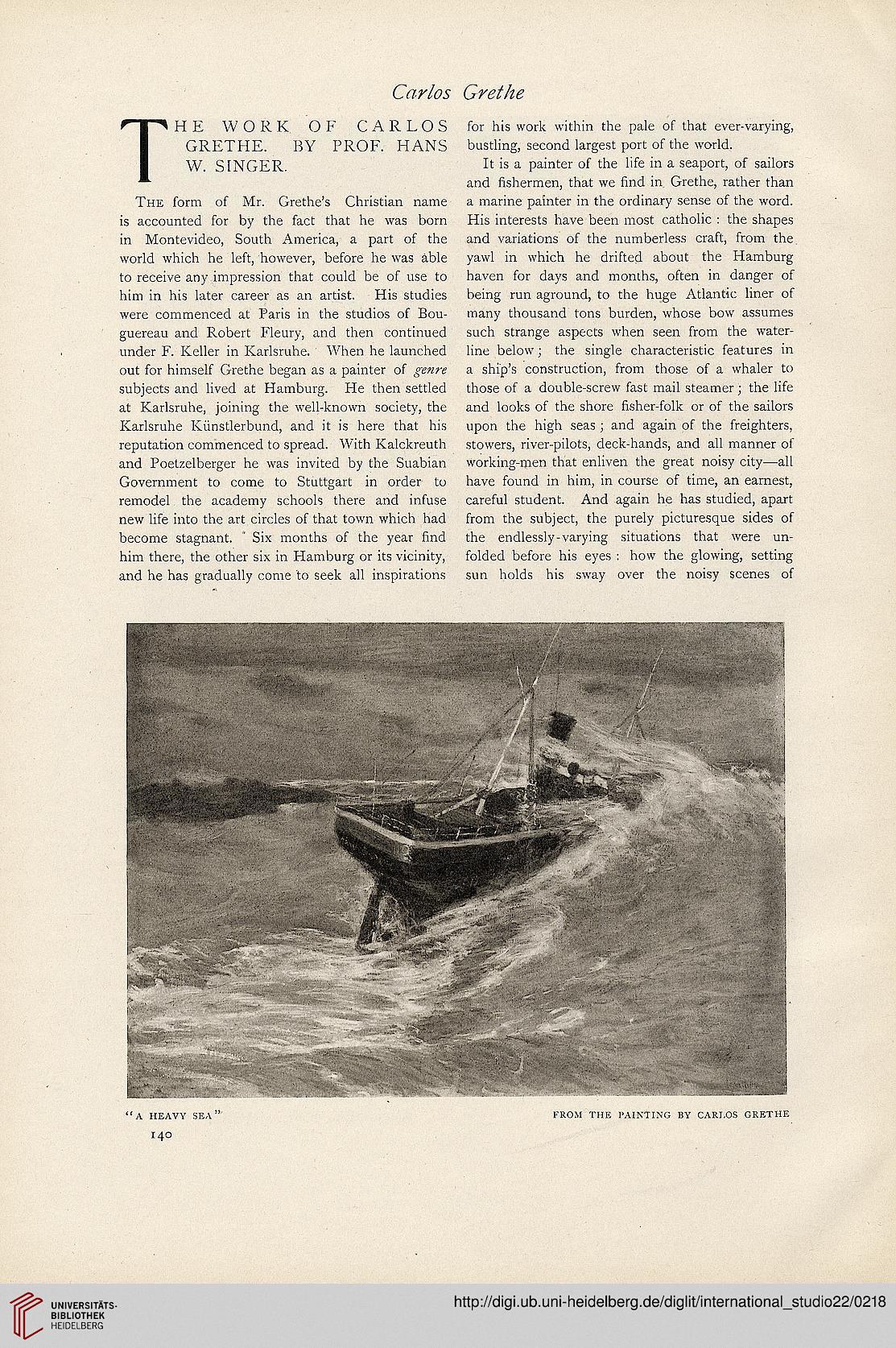 f'jjlHK WORK OF CARLOS
GRETHE. BY PROF. HANS
W. SINGER.
THE form of Mr. Grethe's Christian name
is accounted for by the fact that he was born
in Montevideo, South America, a part of the
world which he left, however, before he was able
to receive any impression that could be of use to
him in his later career as an artist. His studies
were commenced at Paris in the studios of Bou-
guereau and Robert Fleury, and then continued
under F. Keller in Karlsruhe. When he launched
out for himself Grethe began as a painter of
subjects and lived at Hamburg. He then settled
at Karlsruhe, joining the well-known society, the
Karlsruhe Ktinstlerbund, and it is here that his
reputation commenced to spread. With Kalckreuth
and Poetzelberger he was invited by the Suabian
Government to come to Stuttgart in order to
remodel the academy schools there and infuse
new life into the art circles of that town which had
become stagnant. Six months of the year find
him there, the other six in Hamburg or its vicinity,
and he has gradually come to seek all inspirations

for his work within the pale of that ever-varying,
bustling, second largest port of the world.
It is a painter of the life in a seaport, of sailors
and fishermen, that we find in Grethe, rather than
a marine painter in the ordinary sense of the word.
His interests have been most catholic : the shapes
and variations of the numberless craft, from the
yawl in which he drifted about the Hamburg
haven for days and months, often in danger of
being run aground, to the huge Atlantic liner of
many thousand tons burden, whose bow assumes
such strange aspects when seen from the water-
line below; the single characteristic features in
a ship's construction, from those of a whaler to
those of a double-screw fast mail steamer; the life
and looks of the shore fisher-folk or of the sailors
upon the high seas ; and again of the freighters,
Stowers, river-pilots, deck-hands, and all manner of
working-men that enliven the great noisy city—all
have found in him, in course of time, an earnest,
careful student. And again he has studied, apart
from the subject, the purely picturesque sides of
the endlessly-varying situations that were un-
folded before his eyes : how the glowing, setting
sun holds his sway over the noisy scenes of

FROM THE TAINTING BY CARI.OS GRETHE