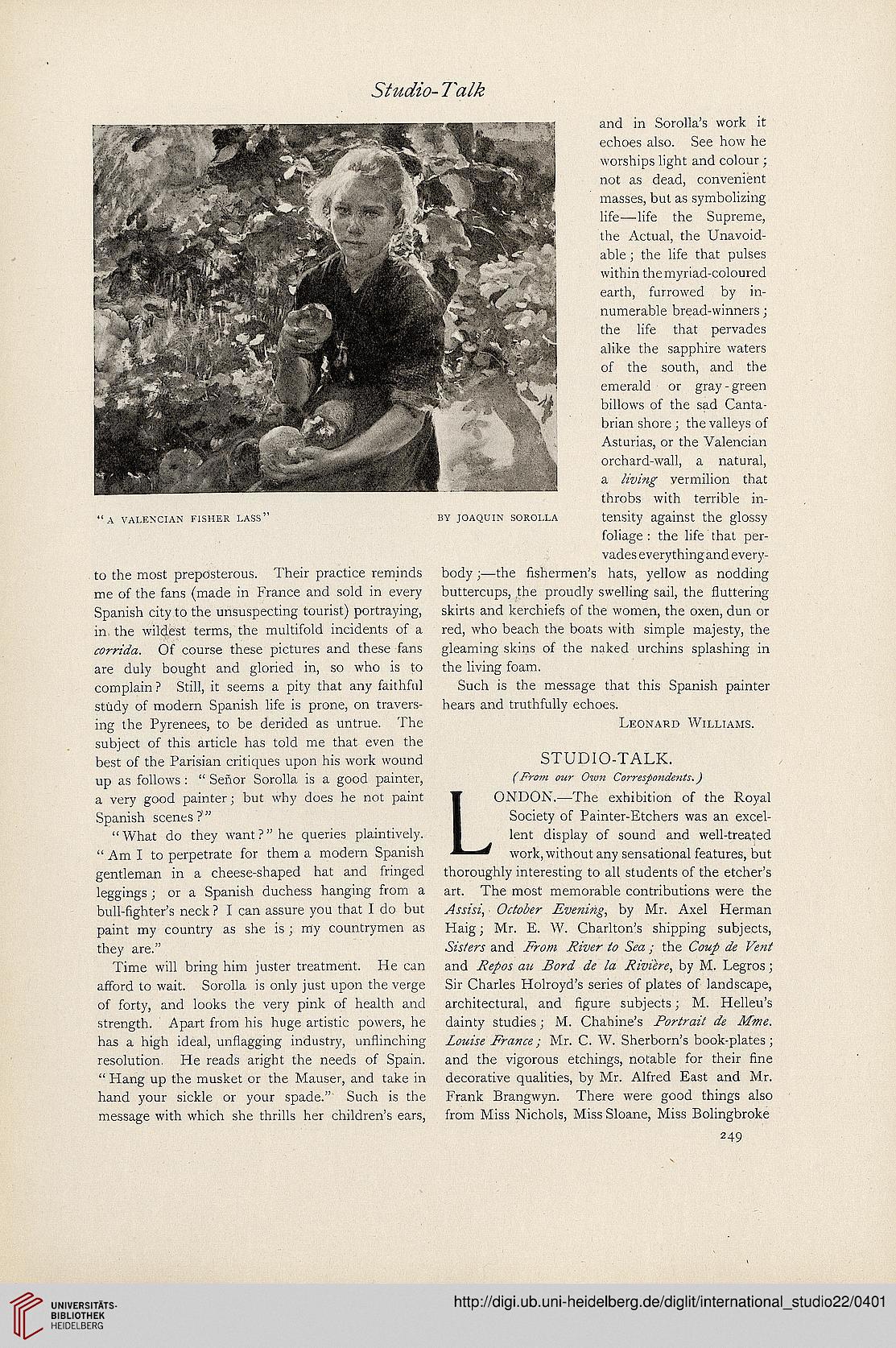 to the most preposterous. Their practice reminds
me of the fans (made in France and sold in every
Spanish city to the unsuspecting tourist) portraying,
in the wildest terms, the multifold incidents of a
<r<77-77i%3. Of course these pictures and these fans
are duly bought and gloried in, so who is to
complain ? Still, it seems a pity that any faithful
study of modern Spanish life is prone, on travers-
ing the Pyrenees, to be derided as untrue. The
subject of this article has told me that even the
best of the Parisian critiques upon his work wound
up as follows : " Senor Sorolla is a good painter,
a very good painter ; but why does he not paint
Spanish scenes?"
"What do they want?" he queries plaintively.
" Am I to perpetrate for them a modern Spanish
gentleman in a cheese-shaped hat and fringed
leggings ; or a Spanish duchess hanging from a
bull-lighter's neck ? I can assure you that I do but
paint my country as she is ; my countrymen as
they are."
Time will bring him juster treatment. He can
afford to wait. Sorolla is only just upon the verge
of forty, and looks the very pink of health and
strength. Apart from his huge artistic powers, he
has a high ideal, unflagging industry, unflinching
resolution. He reads aright the needs of Spain.
" Hang up the musket or the Mauser, and take in
hand your sickle or your spade." Such is the
message with which she thrills her children's ears,

and in Sorolla's work it
echoes also. See how he
worships light and colour ;
not as dead, convenient
masses, but as symbolizing
life—life the Supreme,
the Actual, the Unavoid-
able ; the life that pulses
within the myriad-coloured
earth, furrowed by in-
numerable bread-winners;
the life that pervades
alike the sapphire waters
of the south, and the
emerald or gray - green
billows of the sad Canta-
brian shore ; the valleys of
Asturias, or the Valencian
orchard-wall, a natural,
a /w/TTg' vermilion that
throbs with terrible in-
tensity against the glossy
foliage : the life that per-
vades everything and every-
body ;—the fishermen's hats, yellow as nodding
buttercups, the proudly swelling sail, the fluttering
skirts and kerchiefs of the women, the oxen, dun or
red, who beach the boats with simple majesty, the
gleaming skins of the naked urchins splashing in
the living foam.
Such is the message that this Spanish painter
hears and truthfully echoes.
LEONARD WILLIAMS.
STUDIO-TALK.
ONDON.—The exhibition of the Royal
Society of Painter-Etchers was an excel-
lent display of sound and well-treated
work, without any sensational features, but
thoroughly interesting to all students of the etcher's
art. The most memorable contributions were the
by Mr. Axel Herman
Haig; Mr. E. W. Charlton's shipping subjects,
and Ahwz A? the Cuay) H77A
and aM j%77*a? 7%? /a AY&z'<?7^, by M. Legros;
Sir Charles Holroyd's series of plates of landscape,
architectural, and figure subjects; M. Helleu's
dainty studies; M. Chahine's AbT-Araz'/ 7% AAw.
Zww Ak<!77^/ Mr. C. W. Sherborn's book-plates;
and the vigorous etchings, notable for their fine
decorative qualities, by Mr. Alfred East and Mr.
Frank Brangwyn. There were good things also
from Miss Nichols, Miss Sloane, Miss Bolingbroke
249