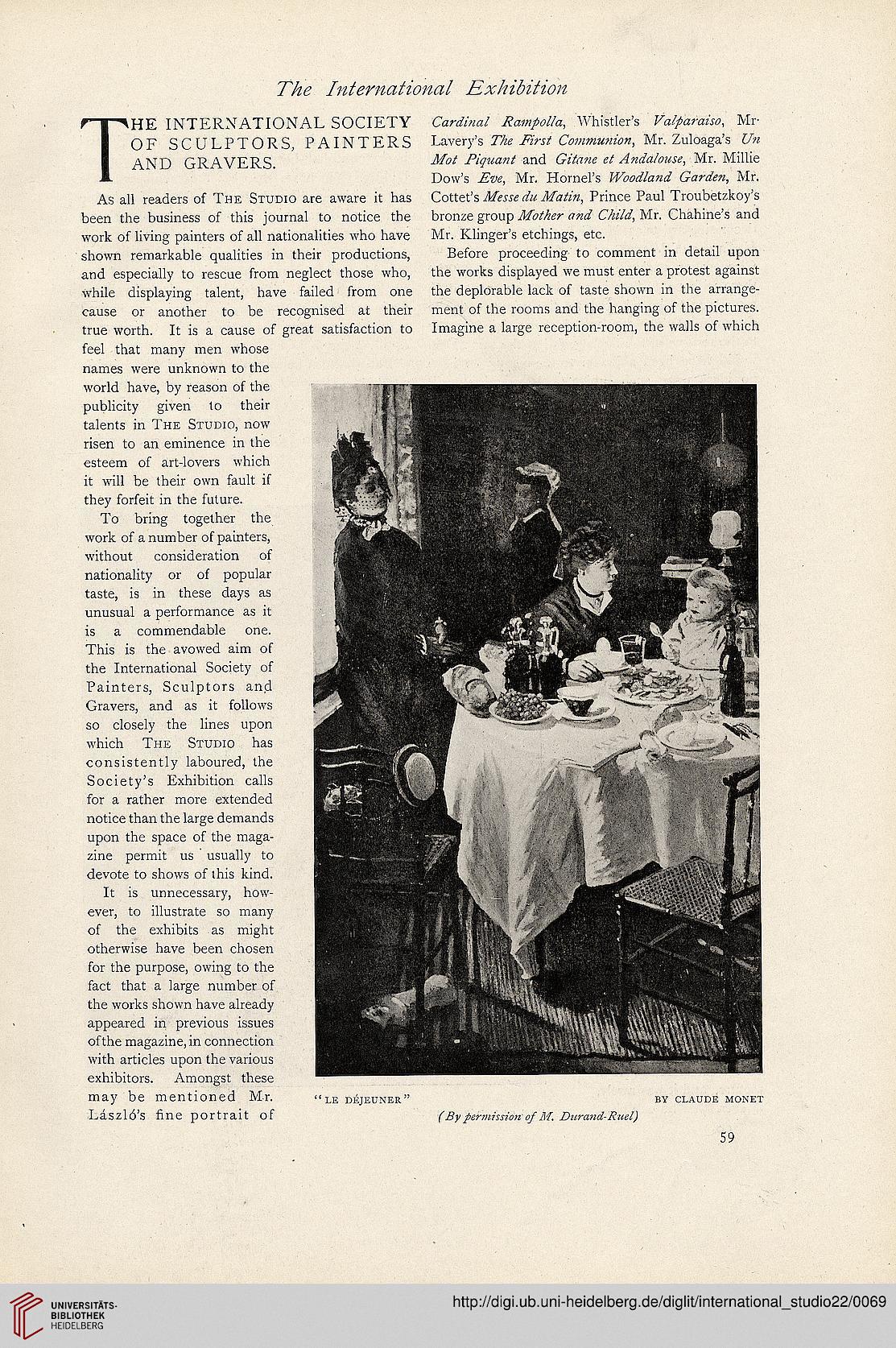 
HE INTERNATIONAL SOCIETY
OF SCULPTORS, PAINTERS
AND GRAVERS.

As all readers of THE STUDIO are aware it has
been the business of this journal to notice the
work of living painters of all nationalities who have
shown remarkable qualities in their productions,
and especially to rescue from neglect those who,
while displaying talent, have failed from one
cause or another to be recognised at their
true worth. It is a cause of great satisfaction to
feel that many men whose
names were unknown to the
world have, by reason of the
publicity given to their
talents in THE STUDIO, now
risen to an eminence in the
esteem of art-lovers which
it will be their own fault if
they forfeit in the future.
To bring together the
work of a number of painters,
without consideration of
nationality or of popular
taste, is in these days as
unusual a performance as it
is a commendable one.
This is the avowed aim of
the International Society of
Painters, Sculptors and
Gravers, and as it follows
so closely the lines upon
which THE STUDIO has
consistently laboured, the
Society's Exhibition calls
for a rather more extended
notice than the large demands
upon the space of the maga-
zine permit us usually to
devote to shows of this kind.
It is unnecessary, how-
ever, to illustrate so many
of the exhibits as might
otherwise have been chosen
for the purpose, owing to the
fact that a large number of
the works shown have already
appeared in previous issues
of the magazine, in connection
with articles upon the various
exhibitors. Amongst these
may be mentioned Mr. "LE DEJEUNER'
Laszld's Ane portrait of

CarA/zaf Whistler's Ta<^a7-aAa, Mr-
Lavery's 7%; AlAi* (7777777777777^77, Mr. Zuloaga's U77
A/a7* and ^^a^z/aTAM, Mr. Millie
Dow's Aw, Mr. Hornel's (Pa7*<%777, Mr.
Cottet's Afhwa^A/a/z'Tz, Prince Paul Troubetzkoy's
bronze group aTzal C/Wa', Mr. Chahine's and
Mr. Klinger's etchings, etc.
Before proceeding to comment in detail upon
the works displayed we must enter a protest against
the deplorable lack of taste shown in the arrange-
ment of the rooms and the hanging of the pictures.
Imagine a large reception-room, the walls of which