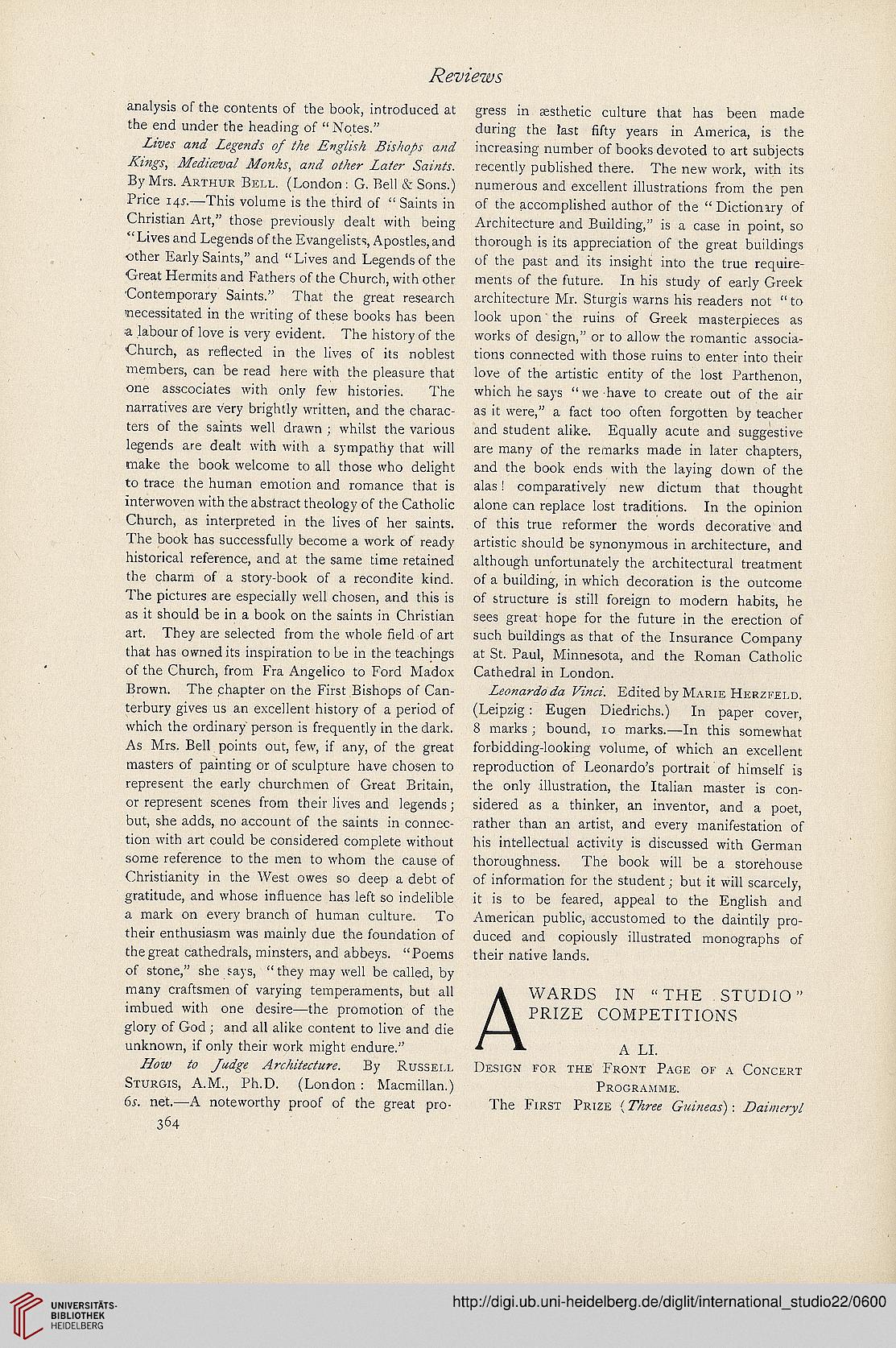 analysis of the contents of the book, introduced at
the end under the heading of " Notes."
Zz'zw Z<^wZr a/" azzzf
AZzfzA&a/ ZZ?zz^y, azzzf a/z^y ZaAy Naz'zzA.
By Mrs. ARTHUR BELL. (London : G. Bell & Sons.)
Price 14.L—This volume is the third of " Saints in
Christian Art," those previously dealt with being
"Lives and Legends of the Evangelists, Apostles, and
other Early Saints," and "Lives and Legends of the
Great Hermits and Fathers of the Church, with other
Contemporary Saints." That the great research
necessitated in the writing of these books has been
a labour of love is very evident. The history of the
Church, as reflected in the lives of its noblest
members, can be read here with the pleasure that
one asscociates with only few histories. The
narratives are very brightly written, and the charac-
ters of the saints well drawn ; whilst the various
legends are dealt with with a sympathy that will
make the book welcome to all those who delight
to trace the human emotion and romance that is
interwoven with the abstract theology of the Catholic
Church, as interpreted in the lives of her saints.
The book has successfully become a work of ready
historical reference, and at the same time retained
the charm of a story-book of a recondite kind.
The pictures are especially well chosen, and this is
as it should be in a book on the saints in Christian
art. They are selected from the whole field of art
that has owned its inspiration to be in the teachings
of the Church, from Fra Angelico to Ford Madox
Brown. The chapter on the First Bishops of Can-
terbury gives us an excellent history of a period of
which the ordinary person is frequently in the dark.
As Mrs. Bell points out, few, if any, of the great
masters of painting or of sculpture have chosen to
represent the early churchmen of Great Britain,
or represent scenes from their lives and legends;
but, she adds, no account of the saints in connec-
tion with art could be considered complete without
some reference to the men to whom the cause of
Christianity in the West owes so deep a debt of
gratitude, and whose influence has left so indelible
a mark on every branch of human culture. To
their enthusiasm was mainly due the foundation of
the great cathedrals, minsters, and abbeys. "Poems
of stone," she says, " they may well be called, by
many craftsmen of varying temperaments, but all
imbued with one desire—the promotion of the
glory of God ; and all alike content to live and die
unknown, if only their work might endure."
Zf?w A yfyr/%;ZM*%yF. By RussEi.i.
STURGIS, A.M., Ph.D. (London : Macmillan.)
6^. net.—-A noteworthy proof of the great pro-
364

gress in aesthetic culture that has been made
during the last fifty years in America, is the
increasing number of books devoted to art subjects
recently published there. The new work, with its
numerous and excellent illustrations from the pen
of the accomplished author of the " Dictionary of
Architecture and Building," is a case in point, so
thorough is its appreciation of the great buildings
of the past and its insight into the true require-
ments of the future. In his study of early Greek
architecture Mr. Sturgis warns his readers not " to
look upon the ruins of Greek masterpieces as
works of design," or to allow the romantic associa-
tions connected with those ruins to enter into their
love of the artistic entity of the lost Parthenon,
which he says "we have to create out of the air
as it were," a fact too often forgotten by teacher
and student alike. Equally acute and suggestive
are many of the remarks made in later chapters,
and the book ends with the laying down of the
alas! comparatively new dictum that thought
alone can replace lost traditions. In the opinion
of this true reformer the words decorative and
artistic should be synonymous in architecture, and
although unfortunately the architectural treatment
of a building, in which decoration is the outcome
of structure is still foreign to modern habits, he
sees great hope for the future in the erection of
such buildings as that of the Insurance Company
at St. Paul, Minnesota, and the Roman Catholic
Cathedral in London.
Z^azzayZaZa Fz'wr/. Edited by MARIE HERZEELD.
(Leipzig : Eugen Diedrichs.) In paper cover,
8 marks ; bound, 10 marks.—In this somewhat
forbidding-looking volume, of which an excellent
reproduction of Leonardo's portrait of himself is
the only illustration, the Italian master is con-
sidered as a thinker, an inventor, and a poet,
rather than an artist, and every manifestation of
his intellectual activity is discussed with German
thoroughness. The book will be a storehouse
of information for the student; but it will scarcely,
it is to be feared, appeal to the English and
American public, accustomed to the daintily pro-
duced and copiously illustrated monographs of
their native lands.
A WARDS IN "THE STUDIO"
PRIZE COMPETITIONS
A LI.
DESIGN FOR THE FRONT PAGE OF A CONCERT
PROGRAMME.
The FIRST PRIZE (7%7W Gaz/way): Z^afwavy/